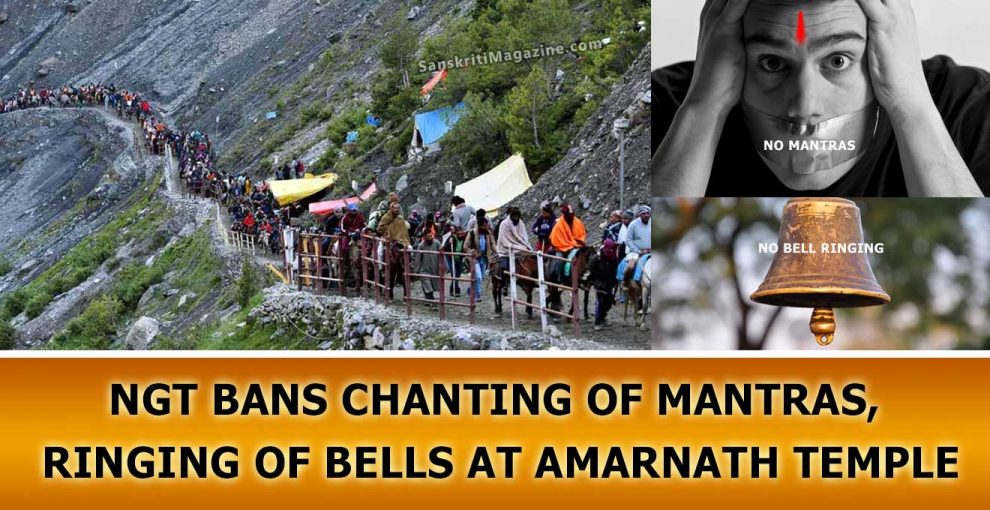 The National Green Tribunal on Wednesday banned the chanting of mantras at Amarnath temple and issued a slew of orders to be implemented by the Amarnath Shrine Board. The directions come after the green court rapped the Amarnath Shrine Board last month for failing to provide adequate infrastructure facilities to pilgrims and asked it to submit a status report on the same in the first week of December.

On Wednesday, an NGT bench headed by chairperson Justice Swatanter Kumar said there should be no ringing of bells in the cave temple, situated at an altitude of 3,888 metres in J&K, and pilgrims would have to deposit all mobiles and belongings at the last check post. The tribunal asked the shrine authorities to consider buiding a separate room where people could keep their belongings.

Moreover, the NGT said there should no chanting of ‘mantras’ or ‘jaykaras’ in Amarnath and asked the board for strict implementation of its orders. The tribunal also said there should be a single queue of people walking towards the main cave from the last check post.

During the hearing in November, the tribunal also sought to know if the Amarnath board had complied with the Supreme Court’s 2012 directions to improve infrastructure to prevent casualties during the pilgrimage. In 2012, the SC had set up a high-powered committee to recommend measures to prevent casualties during the Amarnath Yatra. The committee comprised senior officials from the Centre, J&K government, security forces and the shrine board. The apex court had taken suo motu cogizance of media reports claiming a rise in casualties due to lack of infrastructure and medical facilities.

Last month, the NGT imposed similar directions for the Vaishno Devi shrine in J&K. It capped the number of pilgrims at the shrine at 50,000 a day. In a bid to prevent any untoward incident, the green court had also directed authorities to construct a new path exclusively for pedestrians and fine pilgrims who are found littering.

The Vishwa Hindu Parishad (VHP) termed the NGT order a “Tughlaki fatwa” (whimsical whip) and said Hindus were not responsible for every ecological problem on earth.

“We appeal to the Government of India to stop hurting the Hindu religious sentiments all the time for one or the other reason and to get the NGT to withdraw such a Tughlaki fatwa at once,” VHP international president Pravin Togadia said.

From Pakistan with hate: Islamists Asks Hindus In Pakistan To Convert Or Flee in town of Mithi
Singapore celebrates Diwali with these gorgeously themed buses and trains
Comment