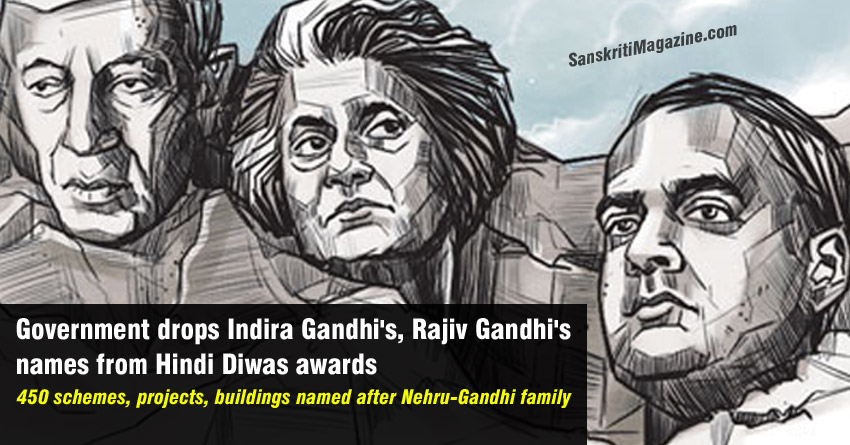 The MHA has removed the names of former prime ministers Indira Gandhiand Rajiv Gandhi from the annual Hindi Diwas awards, ET reports. This has created another political storm with the Congressaccusing the BJP government of indulging in ‘political vindictiveness’.

The ‘Indira Gandhi Rajbhasha Puraskar’ and the ‘Rajiv Gandhi Rashtriya Gyan-Vigyan Maulik Pustak Lekhan Puraskar’ are now renamed as ‘Rajbhasha Kirti Puraskar’ and ‘Rajbhasha Gaurav Puraskar’ respectively as per a March 25, 2015 MHA order. The order was sent to all states, ministries, PMO, President’s Secretariat, Cabinet Secretariat and Lok Sabha & Rajya Sabha Secretariats. The change also finds a mention in an MHA booklet on its ‘300-day achievements’., the report adds.

Kiren Rijiju, MoS at MHA, has said in the report that the discarding of the former prime ministers’ names from the awards was an administrative decision and not a political one. He said that the MHA had remodelled the awards scheme and fused four schemes to two for enhancing its status by making for relevant.

The Congress has demanded to know why the names of the former prime ministers were dropped and blamed the Modi government of being parochial and petty.

The Hindi Diwas awards will be presented by President Pranab Mukherjee on September 14.

Veteran BJP leader Venkaiah Naidu hit out at the Congress for opposing Narendra Modi’s plan to construct a grand statue of Sardar Vallabhbhai Patel saying that the Congress wanted to appropriate all credit for one family.

Referring to the plans to name the Food Security bill after Indira Gandhi, Naidu said that if the ruling party goes on naming each and every scheme after leaders of one particular family without any rationale or connection with that leader, it is highly objectionable and against the spirit of democracy.

Naidu also defended Narendra Modi’s plans to build a Sardar Patel statue asking the Congress to explain why it has ignored other national leaders.