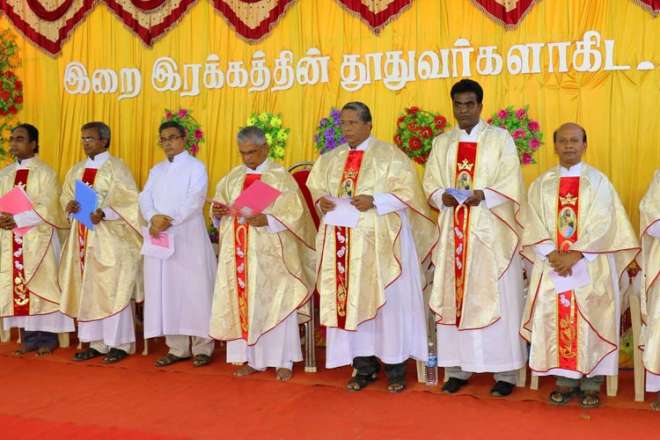 From the denial of priesthood to separate chapels and cemetery, the Dalit Christians of Sivagangai Diocese in Southern Tamil Nadu allege widespread caste-based discrimination, according to a public hearing report released here on Monday.

In the report titled “Dalit Christians Crucified” released here, CPI (M) affiliated Tamil Nadu Untouchability Eradication Front general secretary K Samuel Raj said the prevalence of two chapels and two cemeteries in the villages, holding of two separate festivals, and discrimination of in liturgy are the norm in the caste-ridden Christianity in Sivagangai.

The schools, colleges and hospitals run by the church were located mostly in the Caste Christians areas, he said, adding that staffs are also appointed from non-Dalits Christians.“Sivagangai is now a Diocese that has touched the zenith of the untouchability practices in the Roman Catholic Church. Among the Catholics in this Diocese, 25 percent belong to Devendra Kula Velalar or Pallar – a sub-sect of Dalits. Thirty years after the formation of this Diocese, there is not a single soul from among this Dalit community to be ordained as Priest,” Samuel Raj said, pointing out that as many as 14 Pallar Dalit Christian Seminarian have been evicted from the seminary after several years of training.

The case of expulsion of Michael Raja, a Pillar Dalit Seminarian, at the fag end of his Theological Course and Training has become a rallying point for the Dalit Christians to fight against the discrimination in the Sivangangai Diocese, D Hariparanthaman, a retired Madras High Court judge.

“I along with five other seminarians were expelled from St Paul’s Theological Seminary in 2011 for throwing microphones in the water. Even after one of the brothers confessed to his mistake, the expulsion of five others was not withdrawn. Later, after a lot of protests in support of us, we were allowed to complete our course. I am being the only Pallar Dalit, I was given an option of being ordained as a priest in any other Diocese except Sivaganga.

Ever since I have been fighting against the discrimination of Dalits, in particular, to prevent anyone from becoming a priest,” Michael Raja told DNA. He noted that after his expulsion from the seminary, two other Pallar Dalits seminarian faced his fate with one was forced to leave it on his own. “There are 150 priests in the Diocese of Sivagangai but not one from his Pallar Dalits,” he said.

The report also mentions about the meeting with Rev Bishop of Sivaganga Diocese in which he had admitted the existence of various forms of untouchability against the Dalit Christians. On the issue of conferring priesthood to Micheal Raja, the report quoted Bishop saying that ordination of Michael Raja has to be decided by all the Bishops of Madurai Province. “Though the Most Rev Bishop admitted that no one from Pallar community is a priest in the Sivaganga Diocese the Bishop expressed inability of Sivaganga Diocese to ordain Michael Raja as a priest, as the same is not within his ecclesiastical powers,” the report said.