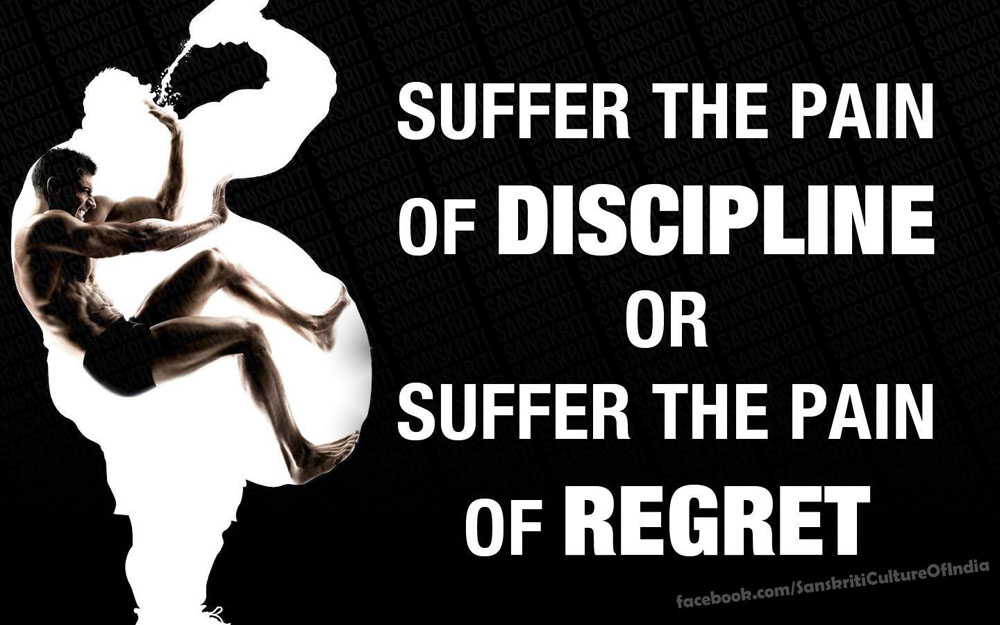 [hr]
Self discipline means deliberately aligning our energy with our values and priorities. Through mental practice we focus in on a task before us and lets other temptations and distractions pass us by.Self-discipline asks that we endure frustration, disappointment, and pain in the service of a higher goal. It means being willing to push ourselves to the limits of our will and endurance if that is what is needed for success.Self-discipline need not be harsh; it can take the form of a quiet resolve or determination that then directs our choices. It is exacting, but is rarely served by our being self-critical or self-denigrating. Self-discipline allows us to make use of whatever power and capabilities have been given us, to be all that we can in the service of our dreams.[hr]

A short story sent in by one of our readers:

“Hi Aksh, how are you? When did you start practicing” I asked when I saw him on ground

“I am absolutely fine, I started practicing from last week. How are you doing man?” Aksh said

“I am good. Today is my first day on ground. It seems fresh in morning to be here” I replied

“Absolutely right, by the way, how was your last year’s experience at Marathon?” he asked pointing towards stone bench to sit while coming out of ground.

“Last year was a terrible” I replied

“Why?” He asked surprisingly

“Last year, one month ago, I was excited and full of zeal to hit the running track from beautiful Bandra-Worli sea link to historic CST. Thoughts of finishing a 21 Km started to appear quite often to me. I felt confident about my athletic ability.” I said

“Yes but I have not participated after school, I felt so lousy and ridiculous when my friends talked about practice and preparation. I laughed at few who approached me to join them for practicing. I bluntly said no to exercise to keep myself fit. I never followed any diet and kept on eating all types of Junk food around the streets. I did not either bother to take enough water or never went for a mock run. I had already planned about how I would finish a run. I have kept myself one and half hours until I reach finishing line.” I said

“Okay but what happened on the day of run” he asked

“I took a ride of my bike to reach Bandra on the day of race. I was already breathing fast when I reached at start line on time after managing to park a bike at secured place. I found thousands of people queued up to start the race. Somehow I managed to reach to the pre-decided place where my friends were waiting for me.

We all positioned to start off. I had a flying start in spite of running after many years. Within few minutes, I covered lot of distance and took over many runners. I was enjoying the moment and wanted to go faster. I tried hard and kept on for some more distance but I could not hold on to the speed. People began to go ahead of me. I wanted to run fast but I was helpless. I read board of 5 km finished. As I tried to run faster, a severe pain appeared on left side of my stomach. I stopped suddenly holding my stomach. I could only walk after this for another two kilometres or so. I started to run again and I kept on relaying on run-walk combination for few more kilometres.

In two hours, I had finished close to sixteen kilometres. I was embarrassed that I had kept target to finish run in only one and half hour. I realised now that its my ignorance of practice. My legs as if crippled to move further. I felt like my knees separated from legs but I carried on.

I saw few people including some of the ladies and senior citizens participants applauding my efforts while moving ahead of me. They kept on saying come on, its only three more kilometres, you can do it, run my friend etc… When I was about to give up, such comments really helped me to push myself towards finishing line. With all my strength, I was marching towards last one kilometre lap. I was drained. I had no energy to move on but I kept on running. I guess, I would have received energy from the people around who were yelling and clapping at their maximum strength. The atmosphere in the final few laps was electrifying with loud radio, covering media, cameras, music, drums and people’s cheer ups. My legs were almost paralyzed as I walked for the final hundred meters.” I finished my long story with a sigh

“I think it was amazing experience” Aksh said

“Yep. I realised that it is equally important to have a cool head on our shoulder along with excitement, energy and enthusiasm necessary to achieve the success. I took a pledge that not only at run but I will never ever ignore the importance of preparation before starting of any work.” I said

Yes, In fact, I have started to take a walk for smaller distances quite often these days instead of going by vehicles.” I said joining laughter while coming out of ground