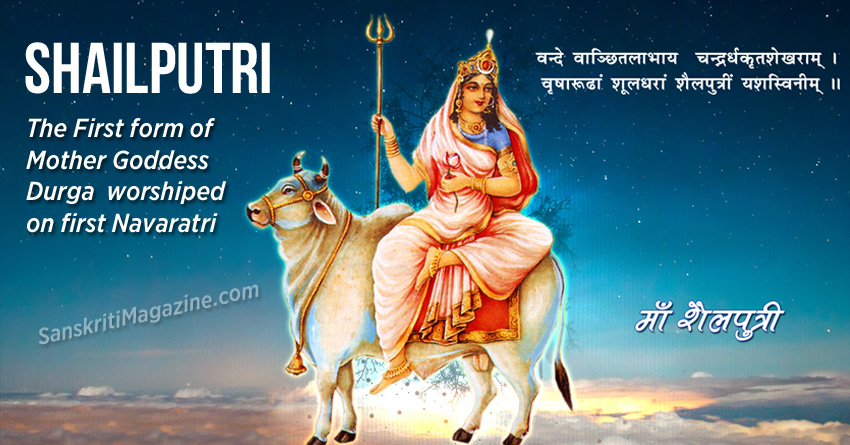 Dedicated to the Mother Goddess Durga, Navaratri is a major festival which is celebrated all over India and Nepal.  One of all nine forms of Devi Durga is worshipped every day in Navaratri.

The first form of Maa Durga is Shailputri, who was born to the King of Mountains. “Shail” means mountain and “putri” means daughter. Hence, she is called Shailputri – the daughter of mountain. Maa Shailputri, an absolute form of Mother Nature, is worshipped on the first day of Navaratri. She is also referred to as Goddess Parvati, the consort of Lord Shiva and mother of Lord Ganesha and Kartikeya.

As the embodiment of Mother Nature, Prakriti, she looks after all living organisms including human beings, animals, trees, shrubs, plants and even tiny living things on Earth.

The image of Maa Shailputri is a divine lady, holding a Trishul (trident) in her right hand and lotus flower in her left hand.  A half moon decorates her forehead and she rides on Nandi.

According to Shiv Mahapurana and other scriptures, Sati married Mahadev against the wishes of her father, King Daksha who was not happy to see his daughter marry an ascetic living in isolation among ghosts and ghouls.

King Daksha organized a Maha Yajna and invited everyone except Shiva and Sati.  Deeply hurt, Sati reasoned within herself that her parents had neglected to make a formal invitation to them simply because an invitation was not necessary for family members.  She resolved to go to the yajna despite attempts by Shiva to dissuade her.

Upon her arrival, King Daksha humiliated both Sati and Shiva in front of everyone present at the yajna.  Humiliated by her father’s behaviour and wanting nothing more to do with her family, she sacrificed her body in the yogic fire.

Deeply shocked and saddened then enraged upon hearing the news of Sati’s death, Shiva tore his hair out and fashioned Virabhadra, the fiercest of warriors.  He then commanded Virabhadra to go to the yajna and destroy Daksha and all present at the occasion.  Upon Shiva’s orders Virabhadra stormed the ceremony and killed Daksha along with many of the guests.

With his anger finally gone only to be replaced by sorrow, Shiva absorbed Virbhadra into his own form and revived Daskha’s body by giving it the head of a goat.  Shiva then carefully picked up Sati’s body and walked away from the scene, not knowing where he was going but simply wanting to be a recluse again.

The other gods tried to bring Shiva out of his mourning but despite several efforts, could do nothing but desperately watch as he roamed the earth and bellowed to the howling winds.  They finally called upon Lord Vishnu to return Shiva to sanity who used his Sudarshana Chakra to cut Sati’s lifeless body into 52 pieces.  These pieces fell at various places and became places of pilgrimage called Shakti Peethas.

With the last part of the body falling away, Shiva sat down at the banks of the source of Ganges and went into a long meditative mode until he remembered who he was and what he had gone through.

Without Shiva, the whole universe was in disorder.

Sati was reborn again as Parvati in the home of King Himalaya, bringing in rays of hope for normalcy to return to the world.  Shiva continued to remain lost in the densest of sadhana and it became very difficult for Parvati to wake him up and recognize her.

With great efforts and immense devotion, Parvati is finally able to break through the barrier she is faced with and remarries Mahadev.

Shailputri symbolizes as the true Goddess of root chakra, Muladhara. Her awakening was toward establishing universal love with Lord Shiva that glorified her as the Goddess of awareness.  Upon awakening this Shakti, one begins their journey towards spiritual awakening and their purpose in life.  Without energizing this chakra, one doesn’t have the power and strength to do anything worthwhile.

To make full use of this precious human life, it is said that one should worship Maa Shailputri and it is for this reason that this Avatar of Mother Goddess Durga is worshipped on the first day of Navaratri.

I worship the illustrious Goddess Shailputri, who is adorned with half moon on her head
Who rides on Nandi and carries a trident. May she fulfil all my wishes.