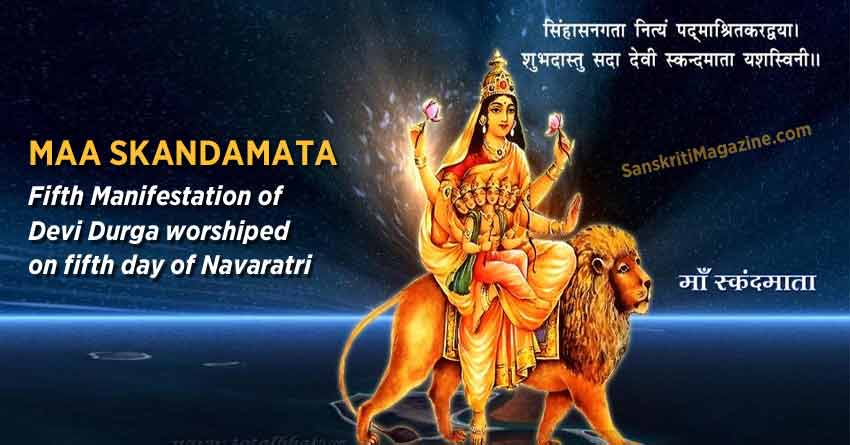 The fifth manifestation of Devi Durga is known as Maa Skandamata. She is fifth among Nava Durgas, thats why she is worshiped on the fifth Navaratri . Devi Maa is the mother of Kumara Skanda or Kumara Kartikeya also called Lord Murugan in south India. Kumar Skanda was chosen by Gods as their commander in “Deva-Sura Sangram” (the war of gods & demons) against the demons. Lord Murugan’s glory has been narrated in the Puranas and he is referred to as Kumara and Saktidhar. His vehicle being peacock he is also called Mayuravahana.

Thus being the mother of Skanda she is Skandamata. Worshipping Skandamata has on the fifth day of Navaratri has very iportacefor Yogis & Sadhaks . This day devotee’s mind reaches Visuddha Cakra and stays therein. In her image the Lord Skanda in his infant form is always found. She holds him in her lap.

Using a lion as a vehicle, Mother Goddess has four arms & three eyes. She holds Lord Skanda in her right upper arm and a lotus flower in her right lower hand, which is slightly raised upward. The left upper arm is in a pose to grant boon and in left lower hand, which is raised, she again holds lotus. She is Golden color. She is seated on lotus flower so she is called Padmasana.

The scriptures are very eloquent in glorifying the fifth day of Navaratra period. As the mind of the aspirant, on this day, is in the Visuddha Cakra. So all his actions internal as well as external completely stop and the mind bereft of all thought-waves, is calm like a wave less ocean. It would be advancing towards the state of pure consciousness. It is completely submerged in the meditation of Mother Padmasana, quite devoid of worldly thoughts or coats of Maya. It is time when the aspirant should be most careful and cautious on the path of his Sadhana.

By worshiping the goddess in the form of Skandamata, the devotee gets all his desires fulfilled. He starts tasting the Supreme joy even in this very mortal world. The gateway for salvation to him is spontaneously opened. Her worship automatically includes the worship of Lord Skanda in his child form. Only she has got this pride of place. So the sadhak should particularly be attentive to her worship. Being the presiding deity of sun god, she bestows an uncommon luster and radiance on her devotee. He is always surrounded by an invisible divine halo, which always maintains his ‘Yoga-Ksema’.

Therefore, we should try very sincerely to take refuge under her. There is no better way to moksha from this world.

She is the Goddess of Fire. The fifth swarup of Ma Durga is “Skanda Mata”. The daughter of Himalaya, after observing penance got married with Shiva. She had a son named “Skanda.” Skanda is a leader of the army of Gods. Skanda Mata is a deity of fire. Skanda is seated in her lap. She has three eyes and four hands. She is white and seated on a lotus. Some also depict her sitting on a lion with her son Skand ( Lord Kartikeya) in her lap with two hands holding lotuses while the other 2 hands respectively display defending and granting gestures. Its said, by the mercy of Ma Skandmata, even the idiot becomes an ocean of knowledge. The great and legendary Sanskrit Scholar Kalidas created his two masterpieces works viz. “Raghuvansh Maha Kavya” and “Meghdoot” by the grace of Ma Skandmata.However some believe Kalidasa was also inspired and blessed by Ma Kushmanda.

Each may be chanted separately not together. Devi Skandmata holds her son Skand in her lap and sits on a lion. She manifests three eyes and four hands–two hands hold lotuses while the other hands offer protection and blessings. We see the energies of Skandmata transforming other healing blessings of the Devis–now silver light streams out of the hands of people, opens up and becomes a ball of energy in the brahmsthaan of homes activating strength and wealth. Brings all the deva and devi blessings into the home and spreads this light into the walls of homes, places of work – especially blessing newly built homes for the well being of all. Offering: Five bunches of grapes (you can separate a large bunch into smaller ones); offer candles morning-evening; accept and share the grapes in the evening with others. Mentally offer all fragrant flowers, fruits, gems, clothing and remember to thank all your friends, family and enemies for giving their help in freeing you from blinding Karma by their association.

The devotees should perform the puja with rituals as mentioned in ancient scriptures. The rituals to worship the goddess is same as the other days of the Navratri. The puja should begin by chanting the mantra, “Sinhasangata Nityam Padyashritakardya Shubhdastu Sada Devi Sakanmata Yashaswani.”

After worshipping the goddess according to the Panchopkar ritual. Lord Shiva and Brahmaji are also worshipped along with the goddess on this day. Some people observe the fast of Upang Lalita on the fifth day of the Navratri. This fast is considered to be very fruitful. Devotees who worship goddess Skandmata with devotion and fervor gets blessings from her and gets all wishes fulfilled. The person gets relief from all kinds of ailments like cough, cold, etc. People who are suffering from serious problems or diseases should offer Alsi to the goddess while worshipping her and eat it himself after the Pooja as a Prasada.

May the renowned Durga Devi Skandamata who is eternally seated on a throne and whose hands
are adorned with lotuses, be ever propitious to me.