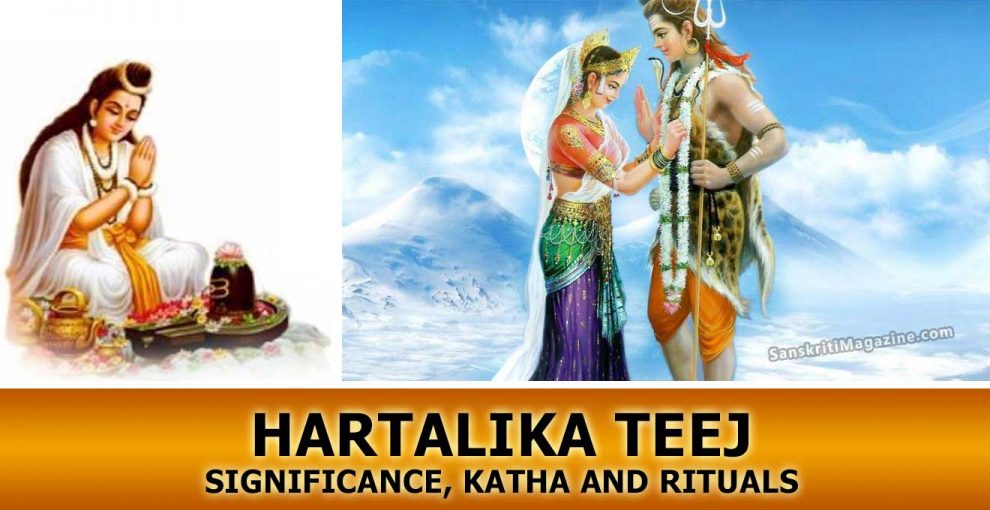 India is a land of colourful festivals celebrated with much grandeur. There are some festivals that are prevalent among women, such as Teej, which is celebrated with much fervour in Rajasthan, Jharkhand, Bihar, Uttar Pradesh, Madhya Pradesh, Chhattisgarh and Maharashtra. Hartalika Teej is the most important Teej festival out of the three including Hariyali Teej and Kajari Teej. It is observed on the third day of Shukla Paksha (fortnight) in the Hindu month of Bhadrapad. This year, Hartalika Teej will be observed on 24th August, 2017. This festival is dedicated to Maa Hartalika, who is also known as Goddess Parvati. Hartalika Teej is celebrated to commemorate the day when Lord Shiva accepted Goddess Parvati’s love towards him. Women all across the country, married or unmarried celebrate this festival in order to be loved by their counterparts or get loving spouses.

‘Harat’ translates to abduction and ‘aalika’ translates to a female friend. According to the Hindu mythology, Goddess Parvati was abducted by her friends so that she didn’t get married to Lord Vishnu, a match set by her father. Goddess Parvati was in love with Lord Shiva. Considering the ascetic he was, it was a difficult task to woo him. Goddess Parvati decided to put all her efforts to make Lord Shiva know about her undying love and affection for him. It is believed that she took 108 births and penance to receive the love from Lord Shiva. The dedication led to Lord Shiva’s acceptance of her love towards him. It is said that this day onwards, Goddess Parvati declared this day auspicious for women and proclaimed that whoever will perform certain rituals on this day will be blessed with a happy married life.

Rituals of the Hartalika Teej:

The legend of Hartalika Teej was narrated by Lord Shiva itself while reminding Goddess Parvatiabout Her incarnation as Shailputri at the home of king Himalayaraj.

When Shailputri came to know about the promise of her father to get her married with Lord Vishnu, she left the home with her friend. She went to thick forest and lived in a cave near the river while penancing to please Lord Shiva. At last Lord Shiva got pleased and promised that He would marry her. The next day Shailputri and her friend observed fast for Lord Shiva which was the day of Shukla Paksha Tritiya during Bhadrapada month.

Due to this legend, this day is known as Hartalika as the friend of Goddess Parvati took her to the thick forest which Himalayaraj considered as abduction of his daughter. Hartalika word is combination of “Harat” and “Aalika” which means “abduction” and “female friend” respectively.

Although women observe fast on this day and restrict themselves from food and water for about 24 hours, but they offer fresh fruits, sweets like ghewar and pedas, and suhaag (sindoor, mangal sutra, etc)items that are relevant for married ladies to Goddess Parvati.

Hartalika Teej vrat has immense significance for Hindu women. On this day they worship Goddess Parvati with full dedication to be blessed with a prosperous domestic life. Unmarried girls also observe this fast to get the choice of their husbands. Therefore this fast can be observed by both married and maiden women. The main objective of Hartalika Teej is to seek marital bliss along with progeny.