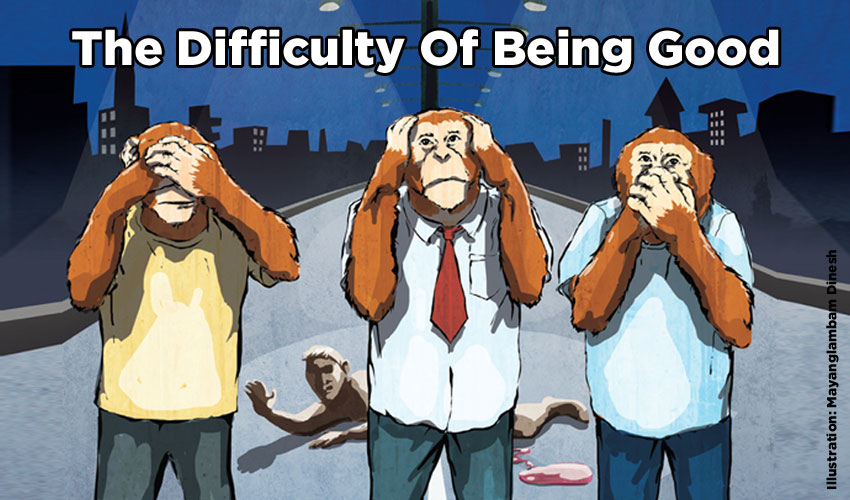 It has been quite some time since the Nirbhaya rape case stirred the nation. Apart from the brutality inflicted upon the victim what else became a stigma for our society was the fact that no one came to the victim’s rescue when the two were lying on the street naked and grievously injured. Of course people did cross them in luxurious cars, two-wheelers and auto-rickshaw, but none were sympathetic enough to stop and rush them to the hospital.

According to the Ministry of Road Transport and Highways, India recorded 1,42,485 road deaths in 2011. This is the highest in the world, and the number of fatalities in road accidents in India is growing by 5.5 per cent every year. In 2012, as many as 381 deaths and 1,301 injuries occurred each day due to road accidents.

These are frightening figures, but the reality is that a large number of deaths occur in India not because of the accident per se, but because the accident victims are not given adequate first aid by bystanders. In India it is a common sight that after an accident, there are more spectators than actors. The public at large is somehow unwilling to step forward and help.

Having said so, need we not ponder as to why the bystanders behave the way they do? Why is it that we find more spectators than actors after a road accident? Why is it that the road accident victims are left lying on the road bleeding profusely for hours even on busy highways? Why does the public hesitate in lending a helping hand to the victims? Is it true that our society has lost the humanitarian sensibility and moral scruple to help the ones in need? Or, is it that the procedural law of the land makes it rather impossible for a Good Samaritan to be good?

In July 2013, Save Life Foundation, a non-profit NGO conducted a survey to understand India’s rising and extreme number of road accident deaths. The study was also supported by Bloomberg Philanthropies and Global Road Safety Partnership at the International Federation of Red Cross and Red Crescent Societies. The survey reveals that, “a whopping 74 per cent of bystanders are unlikely to help severely injured roadside victims. Of them, 88 per cent bystanders who are unlikely to help a victim felt that having to go to police stations and courts for repeated questioning are major deterrents for bringing the victim to hospital.”

The survey further found that “some of the major impediments to bystanders hesitating in helping accident victims reach hospitals include legal hassles such as repeated police questioning and court appearances, unnecessary detainment of Good Samaritans at the hospital, and refusal of treatment in case of non-payment.” As a result, most of the accident victims are left uncared in the ‘golden hour’ when they need immediate medical attention. Those who step forward and lend a helping hand are more often than not heard narrating their harrowing tales of subsequent police harassment and repeated visits to the courts. The point is that a large number of people don’t help, not because they don’t want to, but because the procedural law forces them not to.

The importance of the bystander’s help in an accident can best be understood from the observation of the World Health Organisation in its report titled ‘Pre-Hospital Trauma Care System’ which states that “even the most sophisticated and well equipped pre-hospital trauma care systems, including advanced ambulance services, can do little if bystanders fail to recognise the seriousness of a situation, call for help and provide basic care until help arrives.”

The Law Commission of India, in its report titled ‘Emergency Medical Care to Victims of Accidents, During Emergency Medical Conditions and Women Under Labour’ states that “the Golden Hour is the first hour immediately after the accident in which emergency medical care is necessary and most victims die if no such care is available or is not given soon after the accident.”

Doctors point out that at least 50 per cent of the fatality can be averted if the victims are admitted to a hospital within the first one hour. For an accident victim, “it is important that s/he is provided basic first aid which enables him/her to survive till s/he reaches the hospital.”

According to the Indian Journal of Surgery, 2006, nearly “80 per cent of victims fail to receive emergency medical care within the critical Golden Hour after the accident.”

Social psychologists explain this disturbing behaviour of the society as the ‘Bystander effect.’ It is “a social and psychological phenomenon that refers to cases in which individuals do not offer any means of help to a victim when other people are present. The probability of help is inversely related to the number of bystanders. In other words, the greater the number of bystanders, the less likely it is that any one of them will help.” This happens primarily because when there are many people, the burden of responsibility on an individual gets reduced as it is shared with a large number of people. As a result each individual thinks the other person shall step forward and ultimately the entire crowd is nothing more than an audience of passive spectator. This is exactly the scene witnessed in accidents all over India.

Some countries like France and Germany have enacted laws which not only make it an obligation to help the accident victim but goes as far as to criminally charging the defaulters. The French law not only does not seek to exonerate the rescuer of any liability in the event of inappropriate help, but quite contrarily, it intends to punish the bystander who, directly witnessing a dangerous incident, does not intervene.

Article 223(6) of the French Criminal Code states: “Whoever voluntarily fails to provide to a person in danger the assistance that, without risk for himself or a third party, he could provide, either by his own actions, or by initiating a rescue, may be punished by up to five years of imprisonment and a fine up to €75,000.”

The same spirit of ‘Duty to Rescue’ also is reflected in Article 323(c) of the German Criminal Code as also the Italian, Canadian, Australian, Argentinian and in some US states. Immunity from prosecution is also provided by the law to the first responder who rescues the accident victim in Australia, Canada and some states in the US . This form of law is commonly referred to as the Good Samaritan Law.

In India the genesis of the Good Samaritan Law could be traced to a 1989 Supreme Court judgement. The Supreme Court in Parmand Katra vs Union of India stated: “The effort to save the person should be the top priority not only of the medical professional but even of the police or any other citizen who happens to be connected with the matter or who happens to notice such an incident or a situation.”

But the reality oustide the courtroom remains grim. Road accident victims still lie bleeding profusely with fellow humans passing by devoid of the moral scruple to lend a helping hand. Must we not realise that owing to the very fact that we essentially live in a society and not in isolation, we thus have some inalienable duties and responsibilities towards other members of the society, the mere existence of who gives meaning and life to our own individual existence?

Apart from enacting a Good Samaritan Act, mechanisms for enhancement of first aid knowledge among the citizenry is also of paramount importance. Inculcation of first-aid as a subject in schools across India can help negotiate the knowledge vacuum to a great extent. Furthermore, practical knowhow of first-aid should also be made a mandatory prerequisite for attainment of driving license in India. To tackle the trauma related deaths in road accidents, India urgently needs to uplift the state of highway ambulances. At present, one ambulance is available in every 60 km stretch.

This needs to be reduced to one every 30 km. More and more government hospitals along the highways must be identified and upgraded with state of the art technology to cater to the high number of accident victims. Using a hotline number like 108 to call for an ambulance as prevalent in states like Andhra Pradesh and Uttarakhand also needs to be imbibed in other states.

It’s high time the legislature drafts a ruling in line with the Good Samaritan Laws in other countries so that the common citizenry is empowered and taken into confidence that they shall not be harassed unnecessarily by the police. The government also has the task of spreading awareness about the same in rural belts. The role of the media, owing to its penetrative reach in Indian society, is thus of vital importance in this endeavour. But none of this will bear fruit unless we as a collective decide to behave like Good Samaritans.

The writer is a New Delhi-based freelance writer and a student of Political Science at DCAC; University of Delhi

Our uncaring indifference for life
The Art of Giving
Comment