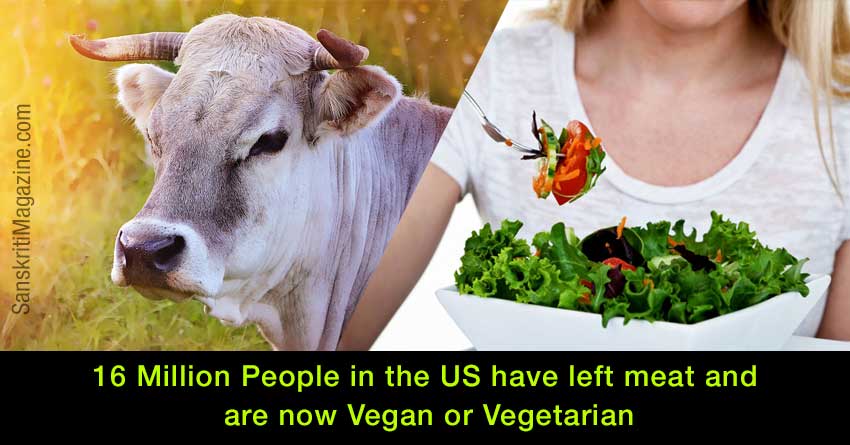 In 2009, a tiny one percent of the US population reported eating vegetarian or vegan. Now, 5% of the United States population is vegetarian and half of those people are vegan. The rates have skyrocketed over the last five years and studies show the rates are climbing. So why are people continuing to go veg? The reason seems to involve a mix of various factors, with the largest impact coming from how much we have learned about commercial farming and animal treatment over the last five years.

The Reason Why The U.S. Is Going Veg

Can you imagine that 16 million people in the U.S. are eating absolutely NO animal products? Pretty amazing considering the degree to which meat has an impact on most of our culture. Approximately 42% of those who do not eat animal products say that they went vegan after they saw an educational film. Sixty-nine percent said they chose to eat a vegan diet to support the ethical treatment of animals. Forty-five percent say they transitioned into veganism over time and of all those who are vegan, 52% say they have been eating vegan for less than 10 years. This could be an indicator of the way the country has become more knowledgeable about our food supply over the last five years. )

Which Other Factors Are Involved In The Veg Transition?

In 2009, when only 1 million people were vegan or vegetarian, 79% of them were woman. Thenumbers haven’t changed much. Today 79% of vegans and 59% of vegetarians are woman.

It seems like men have a harder time giving up animal and dairy products than women. But veganism is for both men and women. The meat consumption actually dropped by 12.2% since 2007. According to Google, people are searching for the keyword “vegan” increasingly more. In 2007, there were only 1600 results for “vegan” searches, but in 2014 this number increased to over 24,000 (and keeps going up).

Restaurants and supermarkets are offering more and more options and the raw vegan industry is thriving. By 2050, the U.S. may even become a VEGAN COUNTRY – or at least have a majority of its people eating a vegan diet.

A vegan, vegetarian, or a plant-based diet with very limited animal products is a healthy, smart and sustainable way to live that can potentially decrease your ecological footprint and greatly improve your health.

Vegan, Vegetarian And Plant-Based: What Is The Difference?

Vegans abstain from eating animal products, including meat, poultry, fish, dairy, eggs and other hidden parts of animals. Many vegans consider honey to be non-vegan, but some still include it in their diet. Ethical vegans choose to abstain from the use of animal products, such as leather or fur and products that were tested on animals as well.

While many vegans care about their health and eat healthy, being vegan doesn’t necessarily mean one is actually eating well. One can live on vegan cookies and french fries and still not be healthy.

To have a healthy diet (vegan or not), you need to eat plant-based and include plenty of leafy greens, vegetables, fruits, nuts and seeds in your diet.

Some vegans eat a mainly raw foods diet, while others eat mainly cooked or a mixture of raw and cooked food. There are low-fat, high-carb vegans and vegans who believe that eating a low-carb, high-fat diet is better. It all depends on your body.

Just like with veganism, a vegetarian can eat a very healthy diet full of plants or lead an unhealthy lifestyle choosing junk foods.

Plant-based diets are all about eating mainly plant-based foods, focusing on leafy greens, vegetables, fruits, nuts, seeds, legumes and whole grains. A plant-based diet can be completely vegan, or vegetarian, or may include some meat, poultry, or even fish.

The main idea is to eat a healthy diet that mostly consists of plants. Eating plant-based is necessary for the health of vegans, vegetarians and those who still include animal products in their diet.