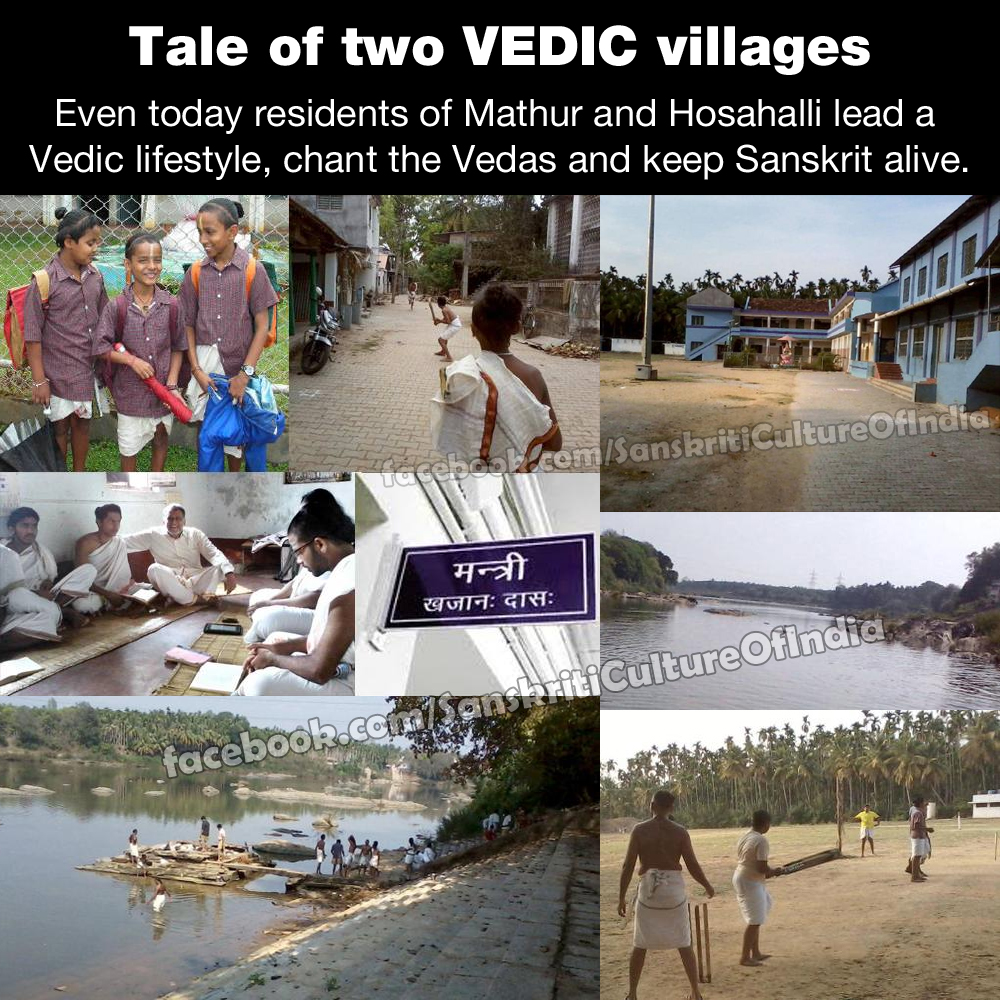 Mathur is a tiny village on the banks of the perennial river Tunga. It is near Shimoga in Karnataka. It has a population of around 1500. Situated in its inner circle are about 256 Brahmin houses in a square type agraharam. It is an agrarian village, which has arecanuts as the primary crop and one acre of it yields a net profit of Rs 90,000 on an average per year.

It is one of the two villages in India where Sanskrit is the official language. The villagers speak a dialect called Sanketi, which is a mixture of Sanskrit, Tamil and Kannada. It has no written script. They read only in Devanagiri script and some in Kannada.

It all started around 500 years ago, when scholarly Brahmins migrated from Pudukottai in Tamil Nadu and settled here along the river bed of Tunga as was customary. King Krishnadevaraya, the then ruler of this place, wanted to donate land to these Brahmins, which they refused because accepting Dhaanam would mean accumulating sins. They felt the sins of the King would pass on to them. They only accepted charity from other Brahmins. So the ruler sent his emissary dressed as a Brahmin and donated vast tracts of land to them on which the arecanuts are now grown.

The entire village is a square, like a typical Mada street, with a temple. This area is called Brahmanaru Mane. Great respect is shown by the rest to these Brahmins. There is a village paatashala, which teaches chanting of Vedas in the traditional way, especially Krishna Yajur Veda along with other ritualistic rites from Bodhayana sutras and Aabhasthamba sutras. Other rituals for yagnas are conducted for learning purposes.

PRIVATE FUNDS USED
The students learn these meticulously under careful supervision of the elders. At present there are only eight students in this paatashala. Most of them come from nearby villages and they stay at the paatashala till they complete their five-year course. The food and other expenses are funded by the Brahmins as they do not receive any donations.

The ground floor and the contiguous houses of the paatashala are occupied by Venkatesh avadhaani (avadhaani is a family title for a very learned person ) and his brother Kesav avadhaani. These two brothers come from a family of Sanskrit scholars and they are engaged in the research of Vedas and rituals. They collect old Sanskrit palm leaves, expand them on the computer and rewrite the damaged letters. They then rewrite these scripts in present day Sanskrit for the sake of publication to make it available to the common man in text form. On certain palm leaves work has been going on for the last one year. They are keen to get in touch with persons either from the Orissa University or similar places, from where they can obtain old Sanskrit palm leaves.

Special mention has to be made about a sannyasi (in his purvaashrama he was known as Theagarajan, a chartered accountant from Mumbai, who took bhiksha from Jayendrar Swamigal of Kanchi and became a sannyasi in 2001). He lives in a small hut near the paatashala and writes, edits, and translates these old palm leaves. His knowledge of Sanskrit is amazing.

Venkatesh avadhaani has team members who are very well versed in CAD /CAM and other computer tools. They create on the computer, after interpreting from the palm leaves and the shulba sutras (published from Delhi by Sri Sharma), the types and designs of bricks to be laid for the various kinds of yagnas. While I was there, they were developing a Garuda type of Homa Gunda for a special yagna to be conducted on the river bed.

His team consisted of purohits and students and everything was done with precision.

An example of their brilliance was seen when I asked them about this famous verse from Bodhayana Sutra of the Shulba Sutra (around 4000 BC) in Mathematics, ‘Deergachatursasyaa akshanyaa rajjuh: Paarsvamanischa Thiryakmani cha. Yatpruthagbhute kuruthasthatubayam karoti.’ It is nothing but a Pythogaras’ theorem stated in Shulba Sutras, 1000 years before Pythogoras wrote it. Venkatesh avadhaani explained it by drawing a rectangle and a diagonal with a chalk on the floor of his house and showed how these Sanskrit words state that the area of the square on one side of the diagonal is equal to the area of the sum of squares on the side and base of that rectangle.

At the paatashala, the students chant Vedas from 10 a.m. till noon, repeating the same line under the leadership of a senior student.At noon, the students and guests are served simple food consisting of rice, sambar or a kootu and curd. They have light tiffin for breakfast. The dinner is also simple.

After lunch, the students continue the chanting either at the paatashala or at their guru’s house.

There are no fixed gurus for the students as they are taught varied subjects by different scholars.

There is a government school called Saraswathi Vidyalaya adjoining the Brahmin agraharam, where they teach the state board syllabus having Sanskrit as the second language in one section and in the other, pure Sanskrit and the conventional Vedic literature. In the evenings, the students play cricket on the school grounds or in the streets.

A Japanese gentleman has been attending the classes of Chenna Kesava Upadhyaya for the last couple of years, learning and writing advanced Vedic scriptures.

On the other side of the river lies another village called Hosahalli. Hosa in Kannada means new. There too resides Brahmins with a paatashala mainly funded by Sringer Mutt, which also has eight students. Most of the sons of these scholars take to western education and get jobs in Bangalore.

SPOKEN SANSKRIT
There is a Sanskrit scholar, Laxmi Kant Upadhyaya, who comes from Tamil Nadu. He wants to propagate spoken Sanskrit. According to him, Pejawar Mutt Swamiji wanted spoken Sanksrit to be popularised and so he promoted the Hindustan Seva Sangh. But due to lack of funds it was eventually taken over by Samskriti Bharaati, an organisation involved in the propagation of spoken Sanskrit.

The main idea to make Sanskrit an easy language to speak in, is to adopt regional language words (as they are already present now) and use Sanksrit grammar along with these words in conversation. But conventional mutt heads only wanted Sanksrit to be spoken in the prescribed Vedic way, he says. But here the exception prevails in order to propagate Sanskrit.

The Brahmins of these two villages live their lives in the true Vedic sense such as bathing in the river, performing rituals such as sandhya vandana and so on. If they are invited for special discourses outside their villages or perform special poojas inside their villages, they accept whatever is given to them. They never demand monetary compensations. Marriages also take place among the people of these two villages.

On the other side of Shimoga city (about 10 kms ) lies a village, Koodahalli. This is called Sharada Peetam Shaaka. The present senior acharya who lives at this place is 94 years old.

History mentions how the Shankaracharya of Sringeri His holiness Chandrasekara Mahaswami appointed this senior acharya as his successor. But for some reasons the acharya could not be found for 10 years, so His holiness Abhinavateertah was appointed as the successor.

Ironically, the acharya returned after 10 years only to find another successor in his place and so preferred to stay put in this place as the head of the Shaaka of Sringeri Mutt. This Mutt is situated on the banks of Tungabhadra, the sangamam point of Tunga and Bhadra rivers and a dip here is believed to cure all sins.

How Old is the Word ‘Hindu’?
The Meaning and Concept of Arya
Comment