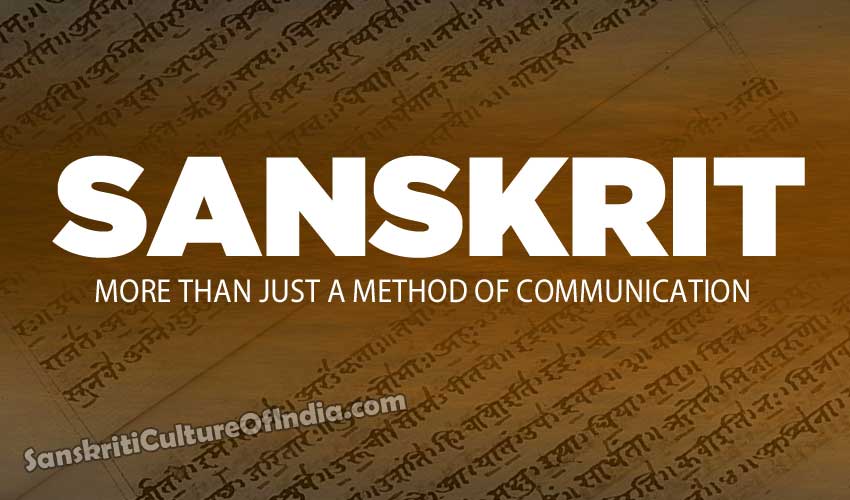 Sanskrit is the language of ancient India, the earliest compilation of sound, syllables and written communication and the speech that is praised as divine even to this date. Sanskrit is the mother language of almost all languages around the globe. It has been described as sanatana or one without a beginning or end, as it has eternally existed from time immemorial and has been the means of communication even among the divinities.

According to Indian traditions, Sanskrit was used for verbal communication from ages of yore but was first scripted by Shri Krishnadwaipayana Vedavyas when he penned down the first veda – Rigveda.

The language consists of thirteen vowels, twenty five consonants, four semi vowels, four sibilants and two diacritics. Each of the letters is flawlessly fabricated to suit the human vocal system. Sounds of the consonants are produced by a complete contact of the tongue with a certain part of the palate. Very mathematically set out, the alphabet is divided into groups according to pronunciation methods. There are a total of five sound producing methods.

All characters in the language are purely phonetic and pronounced as written always. A stint of rhythm is present in the language in both the spoken and written modes. Syllables are either hrasva (of short beat) or deergha (of long beat). Following this, each word spoken has a certain rhythm. This proves the unique blend of musicality within this special language and perhaps that is why it is one of the most soothing languages.

Sanskrit is the basic language of Indian culture. Each and every ancient treatise has been compiled in Sanskrit. Knowledge of the language thus enhances the enthusiasm to learn the scriptures of India. Without knowledge of the scriptures, one cannot be refined in culture or tradition. It is highly important that enough attention is paid to the protection of tradition in this present era whereby modernity is reaching at its peaks and the youth are gradually drifting away from olden values and culture. Without doubt, it is necessary to keep up with the present time and gain knowledge in the upcoming new aspects. But, while doing so, it is extremely essential to keep in mind that our identity and culture are not harmed in any way. One of the most predominant methods of keeping the culture alive within ourselves is to acquaint ourselves with the language of our culture – Sanskrit.

The word Sanskrit itself means refined in culture, therefore the exceptional relation to tradition through the language can be easily understood. Sanskrit provides a base for a loving and respectable communication like none other languages. It is exceptional in its beauty of reverence in the grammar. The major feature of Indian tradition comes sound in this aspect itself – respect. Our rich customs have a chief focus on respect for one another which is automatically gained through Sanskrit communication.

When it comes to knowledge about the enriching and wondrous history of India, there can be no better language than Sanskrit for this too. Numerous epics from the most ancient times to the contemporary times have been composed in Sanskrit. A broad understanding of the language allows the individual to experience the epics as they are. However specific a translation is, it cannot reproduce the same effect as the original script. When one understands the epics as they have been penned by the great sages, a direct relation and adherence can be built up.

All scriptures of India have been composed in Sanskrit. Verses are used directly for many prayers ranging from daily rituals to seldom performed great yagyas. Recitations of prayers from the scriptures are done in pure Sanskrit. This makes it more important to learn the language. During the rituals, no translation or wrong recitation of the verses will suffice and complete the prayer. A pure, correct and strong recitation of Sanskrit is required. If the propagation of Sanskrit diminishes gradually, it hence implies that even our ritualistic prayers and scriptural knowledge shall diminish too. This will lead to loss of Indian tradition. Therefore, the proliferation of our mother language needs to be upheld at any cost.

The language grammar is highly scientific and precise. Very few amounts of letters and words are required to complete a sentence and pass on a message. Together with this, Sanskrit possesses an extremely wide range of synonyms. This relates to the depth of beauty that arises in any poetry done in Sanskrit. Sanskrit poetry has been praised for its elaborate use of nouns and grammar. From the earliest poets of history like Vedavyas Maharishi and the great Sage Valmiki to the recent age poets like Kalidasa and Bhasa, Sanskrit poetry has forever remained exclusive in terms of splendor.

In this way, it can be seen that the language binds so many facets of our culture together. Sanskrit has been respected as a mother language from numerous ages.

It is our duty to keep this language alive in its original form and propagate its knowledge so that many more are blessed with the boon of culture.