Dance is an ancient art in India that is associated with the Divine. The gods and goddesses not only delight in dance but are also great dancers themselves. 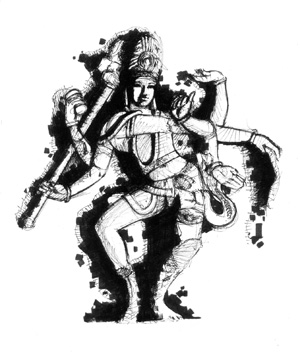 According to Natyashastra, a great comprehensive work of science and technique of Indian drama, dance and music, Brahma, the creator was asked to create a past time by the gods. This work contains deliberations on different kind of postures, the mudras and their meanings, kind of emotions and the categorization, besides the kind of attires, the stage, the ornaments and the audience.

Some prominent dance of the Divine are:

Shiva’s cosmic dance in his form of Nataraja (King of Dance), Tandava, the “Dance of Bliss” symbolizes the cosmic cycles of creation, preservation and destruction and this idea has been embedded in Hinduism theology and ritual since the dawn of civilization. This symbolizes the masculine energy.

The dance of Kali, the dark and fierce Goddess of destruction, the annihilator of Evil depicts time, destruction and “beyond time”. She depicts the female energy which powers the universe eternally.

Krishna is one of the most popular dancing divinities in Hinduism, a dance of divine joy and love. In general sense, this dance – the rasa lila symbolizes a genuine religious pluralism in which human beings of different faiths can love God, in joyous harmony and individually, as each and every soul is precious to the Divine that is.