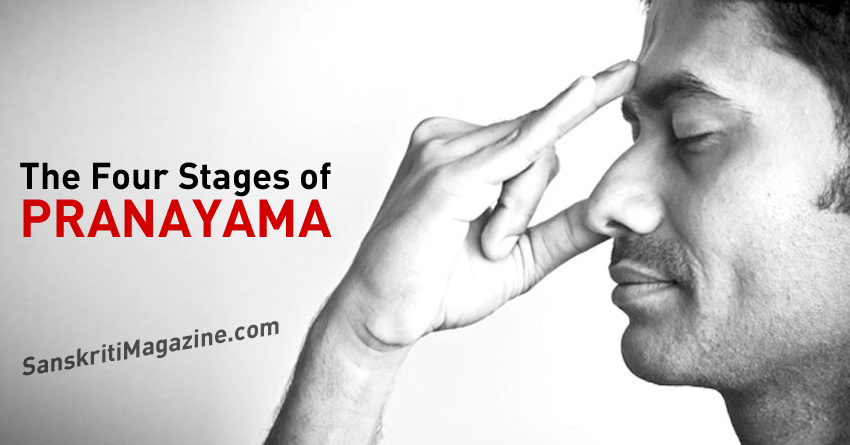 There are four Bhedas (piercing of divisions) viz., Surya, Ujjayi, Sitali and Basti. Through these four ways, when Kumbhaka is near or about to be performed, the sinless Yogi should practise the three Bandhas. The first is called Mula Bandha. The second is called Uddiyana, and the third is Jalandhara.

Their nature will be thus described. Apana which has a downward tendency is forced up by contracting and drawing the anus upwards. This process is called Mula Bandha. When Apana is raised up and reaches the sphere of Agni (fire), then the flame of Agni grows long, being blown about by Vayu. The Agni and Apana come to or commingle with Prana in a heated state. Through this Agni, which is very fiery arises in the body the flaming of fire which rouses the sleeping Kundalini. Then the Kundalini makes a hissing noise, becomes erect like a serpent beaten with a stick and enters into the hole of Brahmanadi (Sushumna). Therefore Yogins should daily practise Mula Bandha. Uddiyana should be performed at the end of Kumbhaka and at the beginning of inhalation. Because Prana ‘Uddiyate’—goes up the Sushumna in this Bandha, it is called Uddiyana by the Yogins. Being seated in the Vajra posture and holding firmly the two toes by the two hands near the two ankles, he should gradually upbear the Tana (thread or Nadi, the Sarasvati Nadi) which is on the western side of Udara (the upper part of the abdomen, above the navel), then to neck.

When Prana reaches Sandhi (junction) of navel, slowly it removes the diseases of the navel. Therefore this should be practised perfectly. Uddiyana can be done in standing posture also. When you practise in standing posture, place your hands on the knees or a little above the knees. Keep the legs a little apart.

The Bandha called Jalandhara should be practised at the end of Puraka. Jalandhara is of the form of contraction of the neck and is an impediment to the passage of Vayu upwards. When the neck is contracted by bending the head downwards, so that the chin may touch the chest, Prana goes through Brahmanadi. Assuming the seat, as mentioned before, one should stir up Sarasvati and control Prana. On the first day Kumbhaka should be done four times, on the second day ten times and then five times separately. On the third day, twenty times will do and afterwards Kumbhaka should be performed with the Bandhas and with an increase of two times per day.

pranava (Om) should be chanted with three Matras (prolonged intonations). This is for the destruction of the former sins. The mantra, Pranava, destroys all obstacles and all sins. By practising this he attains the ‘Arambha Avastha’ (the beginning or first stage). The body of the Yogi begins to perspire. When it perspires he should rub it well with the hands. The trembling of the body also occurs. He sometimes jumps like a frog.

That Yogi who is carefully practising Yoga, attains the power to levitate. Then, should the wise Yogi think that these powers are great obstacles in the attainment of Yoga, he should never take delight or recourse to them. The Yogins should not exercise these powers before any person whomsoever. He should live in the world as an ordinary man in order to keep his powers concealed. His disciples would, without doubt, request him to show them (his powers) for the gratification of their desire. One, who is actively engaged in one’s (world-imposed) duties, forgets to practise Yoga. So he should practise day and night nothing but Yoga without forgetting the words of his Guru. Thus he who is constantly engaged in Yogic practices, passes the Ghata state. Nothing is gained by useless company of worldly-minded people. Therefore, one should with great effort shun evil company and practise Yoga.

Then by such constant practice, the Parichaya Avastha (the third state) is gained. Vayu or breath, through arduous practice pierces the Kundalini, along with Agni through thought and enters the Sushumna, uninterrupted. When one’s Chitta enters the Sushumna along with Prana, it reaches the high seat in the head, along with Prana. When the Yogi by the practice of Yoga acquires power of action (Kriya Sakti) and pierces through the Six Chakras and reaches the secure condition of Parichaya, the Yogi then verily sees the threefold effects of Karma. Then let the Yogi destroy the multitude of Karmas by the Pranava (!). Let him accomplish ‘Kaya-Vyuha’, a mystical process of arranging the various Skandhas of the body and taking various bodies, in order to exhaust all his previous Karmas without the necessity of being reborn. At that time let the great Yogi practise the five Dharanas* or forms of concentration by which, command over the five elements is gained and fear of injuries by any one of them is removed.

This is the fourth stage of Pranayama. Through graduated practice the Yogi reaches the Nishpatti Avastha, the state of consummation. The Yogi, having destroyed all the seeds of Karma drinks the nectar of immortality. He feels neither hunger nor thirst, nor sleep nor swoon. He becomes absolutely independent. He can move anywhere in the world. He is never reborn. He is free from all diseases, decay and old age. He enjoys the bliss of Samadhi. He is no longer in need of any Yogic practice. When the skilful tranquil Yogi can drink the Prana Vayu by placing his tongue at the root of the palate, when he knows the laws of action of Prana and Apana, then he becomes entitled to liberation.

A Yogic student will automatically experience all these Avasthas one by one as he advances in his systematic, regular practices. An impatient student cannot experience any of these Avasthas through occasional practices. Care should be taken in the observances of Mitahara and Brahmacharya.

Sirsasana (Head-down) yoga postures can be fatal for glaucoma patients: Study
Control Your Breathing to Control Your Mind
Comment