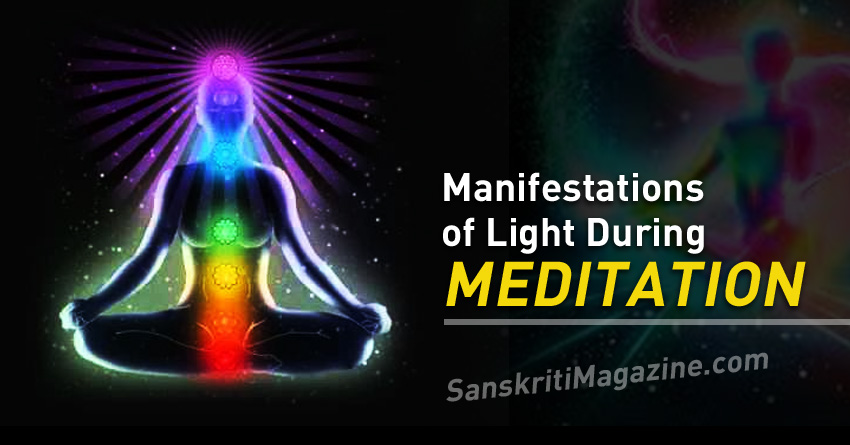 Various kinds of lights manifest during meditation owing to concentration. In the beginning, a bright white light, the size of a pin’s point will appear in the forehead in the Trikuti, the space between the two eyebrows, which corresponds tentatively to the Ajna-Chakra of the astral body.

When you first observe this, be assured that the mind is becoming more steady and that you are progressing in concentration. After some months, the size of the light will increase and you will see a full blaze of white light, bigger than the sun. In the beginning, these lights are not steady. They come and disappear immediately. They flash out from above the forehead and from the sides. They cause peculiar sensations of extreme joy and happiness and there is an intense desire for a vision of these lights.

When you have steady and systematic practice of two or three hours in the morning, and two to three hours at night, these lights appear more frequently and remain steadily for a long time. The vision of the lights is a great encouragement in Sadhana. It impels you to stick steadily to meditation. It gives you strong faith also in superphysical matters. The appearance of the light denotes that you are transcending the physical consciousness. You are in a semi-conscious state when the light appears. You are between two planes. You must not shake the body when these lights manifest. You must be perfectly steady in the Asana. You must breathe very, very slowly.

TRIANGLE (LIGHT) IN THE FACE

One whose food is moderate, whose anger has been controlled, who has given up all love for society, who has subdued his passions, who has overcome all pairs (heat and cold, etc.), who has given up his egoism, who does not bless anyone nor take anything from others-such a man during meditation obtains it (the triangle) in the face.

“Vishoka Va Jyotismati.” (Chap. I, Sutra 36. Patanjali- Yoga-Sutras). “You can attain Samadhi by meditation on the Effulgent One Who is beyond all sorrow.”

FORMS IN THE LIGHTS

You will see two kinds of forms (1) lustrous forms of Devatas, (2) physical forms. You will see your Ishta Devata or tutelary deity (guiding Devata) in handsome dress and with various, valuable ornaments, flowers, garlands, with four hands and weapons. Siddhas, Rishis, etc., appear to encourage you. You will find a huge collection of Devatas and celestial ladies with various musical instruments in their hands. You will see beautiful flower-gardens, fine palatial buildings, rivers, mountains, golden temples, sceneries so lovely and picturesque as cannot be adequately described.

Sometimes, during meditation, you will get very powerful, dazzling lights, bigger than the sun. They are white. In the beginning, they come and fade away quickly. Later on, they are steady, they become fixed for 10 or 15 minutes or half an hour according to the strength and degree of concentration. For those who concentrate on the Trikuti, the space between the two eyebrows, the light appears in the forehead in the Trikuti, while for others who concentrate on the top of the head, Sahasrara Chakra, the light manifests on the top of the head. The light is so powerful and dazzling sometimes, that you have to withdraw yourself from looking at it and break the meditation.

Some people are afraid and do not know what to do and how to proceed further. They come to me for instructions. I tell them that this is a new sensation which they have not hitherto experienced. By constant practice, the mind engaged in concentration will be used to it, and the fear will vanish. I ask them to go on with the practice. Some people concentrate on the heart, some on Trikuti, and some on the top of the head. It is a question of personal taste. It is easy to control mind by concentrating on the Trikuti. If you are used to fix on the Trikuti, stick to it always. Do not make frequent changes. Steadiness is very necessary.

The beings and objects with whom you are in touch during the early period of meditation belong to the astral world. They are similar to human beings minus a physical overcoat. They have desires, cravings, love, hatred, etc., just as human beings have. They have fine bodies. They can move about freely. They have powers of materialisation, dematerialisation, multiplying, clairvoyant vision of an inferior order. The lustrous forms are higher Devatas of mental or higher planes who come down to give you Darshan, and encourage you. Various Saktis manifest in lustrous forms. Adore them. Worship them. Do mental Puja as soon as they give you Darshan. Angels are beings of mental or higher planes. They also appear before your mind’s eye.

Sometimes, you will feel an invisible help, possibly from your Ishta Devata when you are actually pushed from the physical body into the new plane. That invisible power assists in your separating from the body and going above body-consciousness. You will have to mark carefully all these operations.

Do not waste your time in looking at these visions. This is only a curiosity. These are all encouragements to convince you of the existence of superphysical, metaphysical realities and the solid existence of Brahman. Drive these pictures. Fix yourself on the goal-Lakshya. Advance. Proceed seriously and energetically.

Sometimes, during meditation, you will see an infinite blue sky, ethereal space. You will see yourself in the blue space as a black dot. Your form will appear in the centre of the light sometimes. Sometimes, you will notice highly vibratory, rotating particles in the light. You will see physical forms, human forms, children, women, adult males, Rishis with beards, Siddhas and lustrous Tejomaya forms. Visions are either subjective or objective, your own mental reactions or of realities on finer planes of matter. Universe consists of planes of matter of various grades of density. Rhythmical vibrations of Tanmatras in various degrees, give rise to the formation of various planes.

Each plane has its things and beings. Visions may be of these things or beings. They may be purely imaginary. They may be crystalisation of your own intense thinking. You must discriminate in Yogic practices. Reason and common-sense must be used throughout.