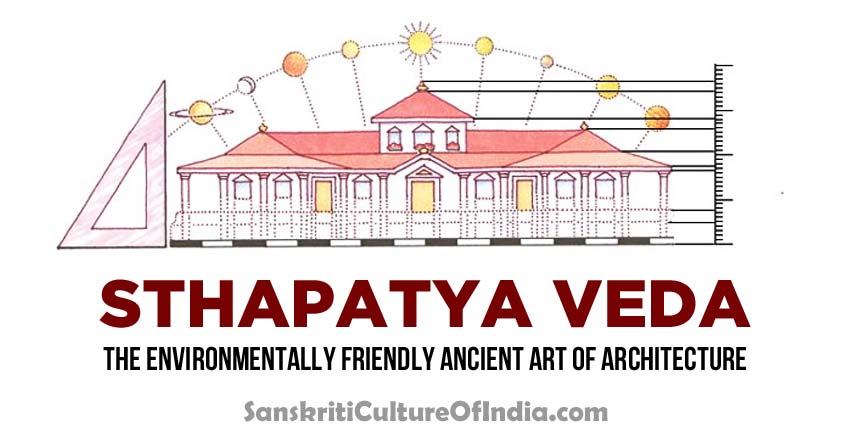 The ancient science of Sthapatya Veda provides extensive knowledge about life supporting building and design principles. It was believed that a properly designed home will promote harmony between parents and children, better physical health, besides financial success.

The word Sthapatya, derived from Sanskrit, means establishment. Veda means knowledge. Thus Sthapatya Veda means the knowledge of establishing a relationship between the owner, house and/or building and the cosmic order.

In the arena of ancient temple construction, there is ample evidence of extensive application of Sthapatya Veda’s design principles. In addition to the spiritual activities at these temples, there are precise mathematical and astrological calculations, proportions of building plan, specific orientation and the applied knowledge of subtle physical properties which produces this feeling of well being.

The ancient Indians firmly believed that the universe is in perfect order since its birth. If an architect can establish a good relationship between building design and order of universe, the life of an individual can be healthier, devoid of stress, creative and blissful. Sthapatya Veda was born out of the fusion of two branches of Veda; Ayur Veda and Jyotish Shastra. AyurVeda is the science of health and the longevity of the human body, while Jyotish Shastra encompasses knowledge of man’s relationship to the universe, and the fluctuating effects which the universe exerts on man. Thus Sthapatya Veda encompasses the needs of the human body and the environment in one holistic science.

The most fascinating aspect of Ayurvedic system of medicine was the diversified method of treatment and cure ─ yoga (meditation),aromatherapy, use of gems, precious stones and amulets, herbs, diet, jyotish (astrology), color and surgery. It is amply evident that each of these methods of treatment had a direct connection with nature i.e the eco-system around us. The use of synthetics and chemicals (a part of Allopathy) was conspicuous by its absence.

Though Ayurveda came into being as a part of Atharva Veda, it has close links with other Vedas also. For instance the Yajur Veda, which lays down elaborate rituals to pacify the panchabhutas (the five basic elements of nature) for the purpose of healing both the Cosmic Being as well as the individual soul, is related to ayurveda in its principles and regulations of lifestyle. Additionally, another upaveda, the Dhanur Veda (related to warfare and the martial arts) and Ayurveda both lay emphasis on the marmas (sensitive points in the body) ─ a precursor of accupressure and acupuncture perhaps!!!

Dhanvantari, believed to be a reincarnation of Lord Vishnu, was the guiding spirit of Ayurveda. He made this science of health and longevity popular and widely prevalent. Two major Samhitas (treatises) were written in the early part of 1000 BC. The great physician Charaka authored Charaka Samhita which has remained a landmark of internal medicine till date. The famous surgeon Susruta, wrote Susruta Samhita, a vast treasure house of knowledge about surgery to replace limbs, cosmetic surgery, caesarian operations and even brain surgery. He is famed for his innovation of cosmetic surgery on the nose (rhinoplasty).

Ayurveda’s relevance in the present age lies in its, subtle, scientific, and holistic approach to the cure and treatment of a disease. It aims at healing not only the body, but also the mind and spirit. Its understanding of the similarities of the laws of nature and the functioning of the human body helps to strike a balance between Man and Nature.

In ancient India, a man’s life was assumed to be of a 100 years; it was sub-divided into four stages, each comprising 25 years ─ Brahmacharya (celibacy) Garhastya (householder) Vanprastha (gradual detachment) and Sanyasa (renunciation of the world).

During the first phase, the main task of an individual was acquiring of education and other useful skills. Those days there were no schools, colleges or universities; composite education on diverse subjects was imparted by learned men and scholars who were hailed as Acharyas and Gurus. The Guru was a father figure, a guardian, an advisor, a counsellor and a confidante. In this connection it was mandatory for a young male to spend a number of years in what was known as a gurukula. This was some kind of a residential college.

The students lived with the guru’s family members, each performing a specific set of chores, apart from imbibing education and ideology. These gurukulas or ashrams were located far away from cities towns and villages.

Since they lived in a natural environment, the students as well as their gurus were concerned about its preservation. They protected trees and worshipped them as Vriksha Devta (tree god), the forest covers as Van Devta (forest god) and the rivers as sources of delicious life-giving water. The ancient people cared for wildlife too. Terms and titles such as Nag Devta (snake god), Kamdhenu (the cow that fulfills your desires) and Kalpavriksha (the wish –fulfilling tree) symbolized the benefits that accrued to human beings from nature and their respect for wildlife. Thus pantheism or animism, by whatever name we may call it, eventually pointed to ecological balance and conservation of nature.

It would be interesting to note that compassion and reverence for life are among the basic tents of Jainism. The term Ahimsa (a = non, himsa = violence), is rooted in positive aims and actions which are directly related to environmental issues. Ahimsa ought to be practiced not only towards human beings, but towards all living creatures including plants.

By not killing or destroying plants or animals one can help to maintain the ecological balance.