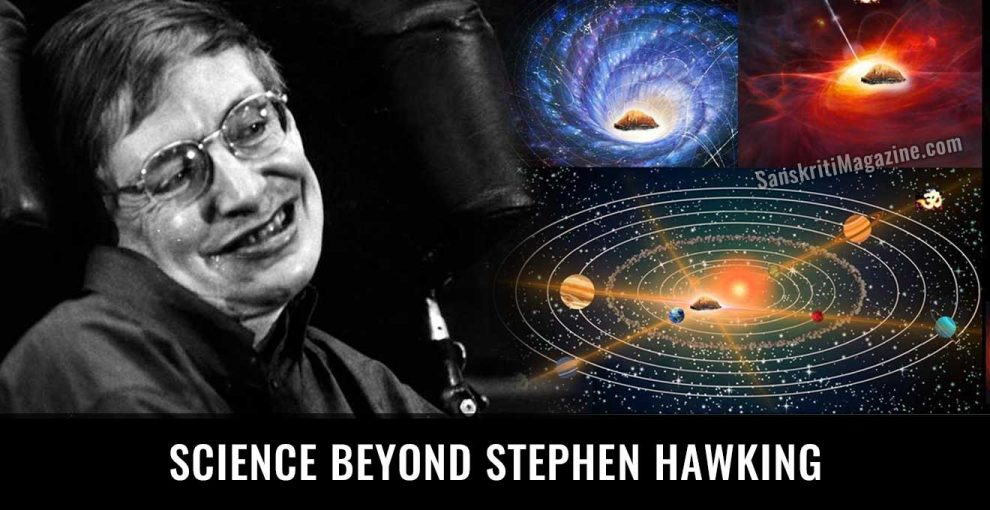 This article is my homage to one of greatest minds of our time – Stephen Hawking.

On 2018 March 02, I read a news article on Stephen Hawking.  Hawking said that he knew what it was before big bang! About 13.8 billion years ago, the entire universe was a single atom, Hawking said. In that immensely dense particle of heat and energy, the laws of Physics and Time did not exist! In fact, time tends to nothing infinitely in that tiny speck. There was no point of talking about what happened before that as it did not have any observational consequences, said Hawking.

After reading that, instantly, I thought of atharvashira upanishad! It very well describes how this universe is formed and how it came into existence. Stephen Hawking passed away on 2018 March 14. And since then, I wanted to write this article!

We do not know exact time when atharvashira or any upanishad was written. General belief is that the upanishads were written some 2500-3000 years ago. Traditionally, upanishads are collection of explanation of vedas as taught by rushis to their disciples. So, this oral tradition might very well be 5000-6000 year old!

atharvashira upanishad is also known as atharvashiras or atharvashirsa upanishad. It is a collection of 7 verses describing rudra. It is based on atharva veda. These verses use contemporary words to characterize rudra. Let us analyze some of these words that are very modern and can be compared with modern scientific discoveries.

The world as we know is destructible. Everything around us that we can perceive with our sensory organs goes through cycles of life and death.

Now at subtle level, there is energy and there are elementary particles. These can change their forms but are basically indestructible as long the universe exists. Our universe is the result of big bang. So, when time commenced, there has to be some state of matter and energy that existed before. This can be called seed of the universe and this aspect of universe can be said to be indestructible.

When this upanishad was written, people must be aware of planets being distinct objects from stars. Indian astronomical texts suggest eight planets – Sun (soorya), Moon (chandra), Jupiter (bruhaspati), Saturn (shani), Venus (shukra), Mercury (budha), Mars (mangala), Earth (pruthvi). Shadows creating lunar and solar eclipses are called shadow planets (raahu, ketu) in that system. People of ancient time must have a method to identify these objects in sky and that seems to be a remarkable fit.

One can utter aum without using tongue, teeth and palate. It is primordial sound. And thus, it is primordial energy. So, we can say that this energy or sound must have existed always according to atharvashira upanishad. Also, this sound or energy is all pervading per the upanishad.

These three qualities are remarkable in the sense that they also can be attributed to elementary particles. Every particle can be considered to follow a wave like pattern. And thus, it has sound and vision even though we cannot perceive such subtle properties. So, when we utter aumkara, we are being in tune with primordial universe. This has immense effect at cellular level which we cannot feel but its result is evident at gross level.

When an object is burnt, its residual matter is ash. Ancient belief was that every matter in this universe is made up of five basic elements – earth, water, fire, air and space. In this verse, it is said that these basic elements are ashes. So, there has to be some objects which were burnt and the result is the formation of the basic elements. We know for sure that Earth is resultant of cooled fire ball. When water vapour cools down, it becomes liquid water. But, vapour is formed if liquid water is heated. So, same can be said for fire, air and space.

This universe came into existence through big bang. The above verse describes that whole process in detail. Heat energy and matter were a dense tiny speck which must be the seed for this universe. That seed must be some state of matter and energy which is indestructible as it existed before the beginning of time. As time comes into existence, that seed expands. This verse also states cycle nature of this universe. It has end and it has beginning. In the end, universe just vanishes.

Once time starts from seed, dark matter and dark energy comes into existence in the seed. These dark entities become thick after some churning. More churning makes it less dense and it creates foam. From that foam, cosmic egg forms. First, gaseous matter is formed. This gives birth to primordial energy. That energy generates radiation. The radiation brings out sound and thus this world is born.

Modern science is not able to describe this process in detail yet. We can assume that rushi who wrote this upanishad has definitely some insight into the phenomenon.