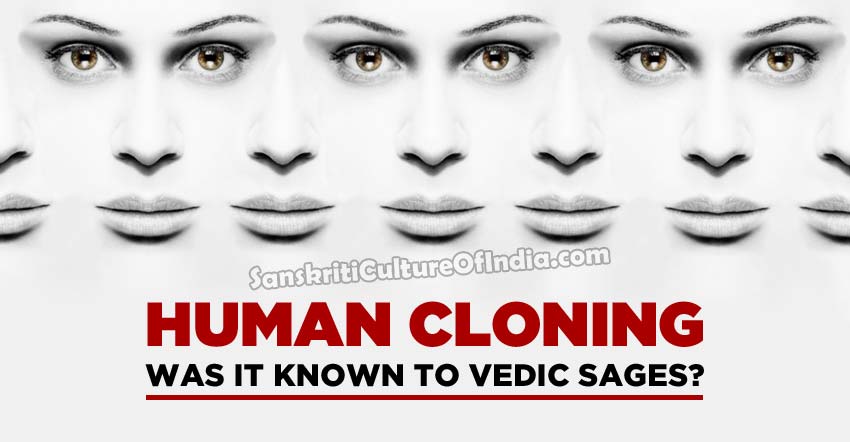 Today at the frontier of Genetic Engineering replacing and manipulating DNA has become the order of the day. Since the successful cloning of adult Sheep ‘Dolly’ in 1996 scientists are thinking to clone ‘human being’ amidst much controversy. But if I say cloning was known to man even in the Puranic era! Does it sound absurd! Perhaps not. We get some indications in Hindu Shastras which are studded with fictionalised ‘Maya Manab and mayabi danab’. Even in Rig Veda we find Indra taking different forms of himself through the mechanism called Maya. The ‘Maya’ or illusion in philosophical context has been a subject of discussions for about four thousand years. Does Maya have some scientific understanding like the modern science? This is still a conundrum. Vettam Mani the author of famous Puranic Encyclopaedia quoted Devi Bhagavata and regional version of Ramayana in the context of Agni Deva who is said to have created ‘Maya Sita’ for Rama so that the ‘clone or Maya’ Sita could pass the test of fire or Agnipariksha.

Moreover, shastra tells us that through this method ‘pious’ Sita remains untouched by Ravana. 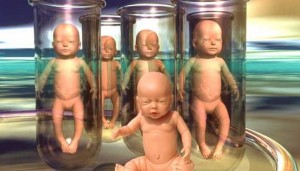 Vettam Mani wrote that “One day Agni disguised as a Brahman approached them and said “O, Sri Rama, thou art born to kill the demon Ravana and save the world from his atrocities. Sita is going to be a cause for that. Time is not far for you to finish this duty of yours. Ravana is soon to come and kidnap your wife, Sita. You must, therefore, allow me to play a trick on Ravana entrust Sita with me and I shall keep her safe. In place of her you can keep a Maya Sita (Phantom Sita) which will be a live replica of your real wife. In the end when you take back Sita after killing Ravana you will be compelled to throw your wife into the fire to test her chastity. At that time I will take back the replica and give you back your real wife”. Sri Rama was very much pleased to hear this.

Agni then, by his yogic powers created a Phantom Sita and gave her to him. Rama kept this as a secret even from Lakshmana. In the great Rama-Ravana battle Ravana was killed and Sri Rama took back Sita to his kingdom. Then respecting public opinion and wishing to establish in public the purity of his queen King Sri Rama put her into the fire. At that moment Agni took back the replica and gave back the real Sita to Sri Rama. Sita thus came out from the fire unscathed. Later, on advise of Rama and Agni, the Phantom Sita went to the sacred place Puskara and started doing tapas (penance) there.” Furthermore Vettam Mani explained this ‘clone or Maya’ Sita became known as Svargalakshmi and in Mahabharata era she became Panchali or Draupadi. (Source: Pauranic Encyclopaedia by Vettam Mani published by Motilal Banarsi Das, 1993 pp10-11&548-549)

From the above discussions it is derived that Agni through ‘Meditation’ created the replica of Sita which was not an illusion but a real clone which got a name and also a destiny like any other puranic personality. It is interesting to note that the reference of ‘Maya Sita’ is available in regional version of Ramayana and not in Valmiki’s version.

Indian mythology has many examples where certain persons could not only create replica but can transform the ‘subject’ into any other animate as we find in Ramayana Mirici took the shape of Golden Deer to allure Sita. In another context we find when Lord Buddha was meditating Mara the Devil in order to detract Buddha’s attention so he created many ferocious figures to frighten Buddha and also created most beautiful females to allure him. Thus we get an indication that creation of dangerous creatures and beautiful damsels was within the power of some persons. 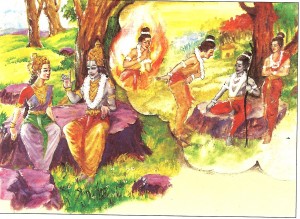 Dr. Satkari Mukhopadhayaya, an expert Indologist and Pandit of various ancient scripts, a Linguist having knowledge of 20 classical and regional languages said that ‘there is no scientific proof available whether those ancient people had any knowledge of cloning or not. But we get some idea that replicas were created which have many references and much of it is related to illusions or Maya. No scripture has ever directly dealt with this concept but indications are many. This is no hearsay that yogis can create an identical person as himself and one person can be present at two places at the same point of time.’ Pt. Mukhopadhayaya further said that ” yogis can even create specific aroma not out of magic but perhaps controlling and manipulating through the method of permutation and combination of panchabhuta. In Benaras the Guru of veteran scholar Gopinath Kabiraj Swami Visuddhananda was known as GANDHA BABA, who could create any ‘wished’ aroma in his hand.”

It’s true that our body is created out of five elements, which is universal for all animates. And everything, be it tree or animal and even man has these ingredients. These ingredients are perhaps placed in such a manner that certain form emerges. However, that’s the subject of Genetic Engineering which layman cannot comprehend. But as in modern science changing DNA or manipulating in forms and sequence etc. can create a ‘desired’ creature, similarly, perhaps, ancient people who could muster the panchabhutas, could create replicas be it at illusionary level or otherwise.

Though it is pooh-poohed that Puranic sources are myths and mere imagination, yet they give a concept which is fathomable by scientific mind of this century. For example Ramayana talked about Pushpak Vimana (aerial chariot), which was created by Viswakarma for Kuber and later Ravana stole it and used it to kidnap Sita and take her to Lanka through the aerial route. And again, we find, after defeating Ravana, Rama took the aerial chariot and once he used it for aerial survey to know the cause of epidemic which endangered infants in his kingdom (see Uttara Ramayana). This is quite similar to the modern ‘aerial survey’ in case of flood etc. Many ancient documents talk about divine weapons which may prove to be ‘fact’ in the next century. Thus concepts hidden in the ancient documents do indicate that there are many potential concepts available which can be tooled by our scientific community to achieve a technological landmark. 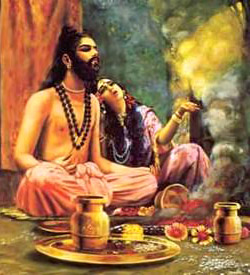 In ancient texts we find that concepts were there but no formulas of creation were passed down to us! That’s perhaps ancient sages knew the human tendency of misusing their acquired powers. As today we are talking about creation of human clone in thousands, at the hour when population explosion is knocking at our doors misbalancing the nature in many ways and causing world-wide distress!

Nevertheless, it’s a matter of interest whether there is any hidden knowledge available in ancient texts which can enthuse the modern Genetic Engineers! Actually Genetic Engineering by the term as we know today is not decipherable in ancient texts. But if one reads through the roots of creation there are some concepts available which can become a subject of ‘scientific quest’ for exploring newer frontiers of human knowledge and research. Let us have a look at the Geneology from Puranic sources.

Puranic Shastras state that all living beings sprang up from Kashyapa–the Chief among Prajapatis or the creator of animate world. However, Mahabharata claims all being were created out of four Gotras or clans: namely Angiras, Kashyapa, Bhrigu and Vasistha. Other Gotras evolved later.

It is said that Kashyapa had 21 wives. Kashyapa’s first wife Aditi gave birth to 12 Aditiyas,8 Vasus and 12 Rudras who were termed as divine beings. Daityas were born out of Diti, the second wife of Kashyapa and Danavas were mothered by Danu. Thus we see the so called divine and demons came out as offspring of one Kashyapa. Is it not astonishing!

Again we see varied creatures and vegetation also came as Kashyapa’s progenies. Vinata gave birth to the mighty bird Garuda and Surasa mothered nagas. Another wife of Kashyapa Ira gave birth to grass on earth. This is also one of the reasons that the Durva Grass is an important aspect of Hindu rituals and worship. Then again from Surabhi the cow emerged. Furthermore, Kashyapa and Anala became parents of trees and creepers of the world.

It may be noted that Aditi, the mother of Gods, Diti the mother of Daityas, Danu the mother of Danava and Anala who created vegetation are interestingly daughters of Daksha. And all the sisters from their single husband Kashyapa gave birth to offspring who varied radically. For modern man all these sound very absurd and ridiculous! But again when we deeper further it indicates some conscious planning of Science which is ‘pre-scientific’!

Ancient sages suggest that all things in this world are created out of Panchabhuta or five elements. But DNA or RNA order or sequence cannot be the same for all. Does it indicate that there was some knowledge system available in ancient times which made possible allowed them the ‘ manipulation’ of some scientific order to create different offspring out of one father Kashyapa. All this seems to be enigmatic!

Let us look into the Panchabhuta and its divisions which created all the things.Puranic Encyclopaedia while discussing Isvara quoted Devigita extensively to explain concept of creation and Godhead.Devigita announces that from primordial principle the five elements were born. Those are Air, Fire, Water, Ether and Earth. These five elements got divided into two parts each giving a total of 10 parts. Then half of the five elements divided itself in four parts. ‘These 1/8 parts are joined to the other halves and by combining them in other fractions, the material bodies (sthulasriras) of all being are made’ said Vettam Mani. Then the Cosmic Body, which is the sum total of those individual material bodies went towards creating inner conscience and body parts like ear etc. Mani further said that “Antahkarana, due to differences in state assumes four forms. When once conception and doubt arises in a subject, then it is called mind. When there is no doubt, but there is assuredness it is called understanding (buddhi)”.

Then came from coarse (sthula) five sense organs and five organs of actions namely mouth for words, foot, hand, execratory and genital organs. Devigita also mentions about five pranas or breath of life and their location in human body. Those are Prana located in the heart, apana in the anus, samana in the navel, udana in the throat and Vyana all over the body.

Thus we see ancient sages during their discourse tried to reach the sukshma or fine aspects from the sthula the gross aspect. Though in the context of modern Genetic Engineering, they were on a different track, but for sure they give us the tattwa jana or knowledge of composition and materials which are a definitely a pointer for modern researchers.

It is perhaps the time when subject and language scholars, pandits and scientists should probe together the hidden knowledge to ‘regain’ the lost heritage of the world which cannot be drabbed anymore as black-magic! Moreover, concepts and initial ideas are the first thread for any quest, and Vedic sources are replete with ‘ideas’ and many of them are yet to be explored!