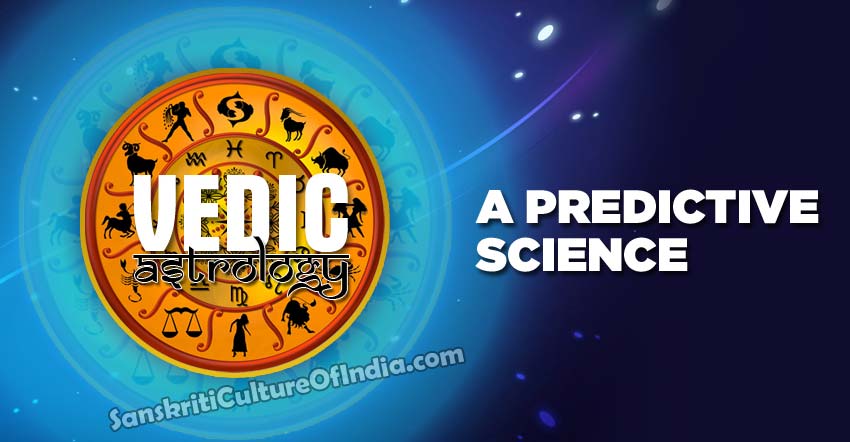 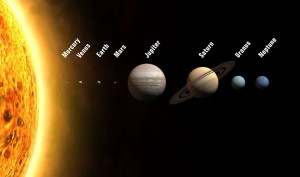 Indian astrology, possibly the oldest system of astrology in the world, differs considerably from the western system. Indian astrology makes ample use of the constellations as visible in the sky. The result is a completely different chart as compared to the one used by western astrologers. Indian astrology is based on the date, place and time of birth.

Did you know the Indian Astrology also differs considerably from the Chinese horoscope, which is based on the year of one’s birth? The Chinese system also believes that the year of birth indicates a certain phase or aspect of a sixty year circle of time. Hence, people who are born in a particular animal year share certain common traits of that particular animal just like people born under a common zodiac sign. Indian Astrology defines the actual traits of an individual, marital compatibility and the future, based on the position of planets at the time and place of birth. It is highly authentic and its predictions are believed to be the most accurate.

What is Vedic Astrology / Jyotish

Jyotish is the Hindu system of astrology; it is considered to be one of the six disciplines of Vedanta. The Sanskrit word derives from jyótis (“knowledgeable” equating as one who is knowledgeable, or enlightened with knowledge, of birth, fate, and relationship to water, earth and stars) or which means “light, brightness”, but in the plural also “the heavenly bodies, planets and stars”.

Jyotish has historically been part of a continuous “holistic” approach to living and to spiritual practice within the Hindu way of life prevalent in India.

Jyotish is often considered to be the instructional element of the Rig Veda; hence it is termed as Vedanga, or “body part” of the Vedas. An important part of a larger Vedic curriculum including mathematics, architecture, medical and military applications, Jyotish has its own sophisticated system of reference: the planets are “grahas“, which are believed to influence or act upon all living creatures in this world and mould their destinies and fates. The Hindus believe that human beings encounter good fortune and misfortune in their worldly lives, according to their karma (actions and deeds in one’s past, present and future life). Hence many people make use of Jyotish to take a stock of their lives and to discover their futures.

The basic premise of Vedic astrology is that all things are linked. An individual’s karma or fortune is determined by a pre-arranged cosmic design. An individual is a soul incarnating in a body at a specific place and a particular time; a person’s life is a reflection of the greater whole into which he /she is born.

In Vedic Astrology there is greater emphasis placed on the Moon than on the Sun.  The moon represents the mind; it is an agency of perception and consequently is a major determining factor in a person’s interactions with the world. In Indian culture relationships and compatibility are greatly stressed upon, since all components of life involve relationships. Hence a Vedic Astrologer can effectively analyze a person’s relations with his /her biological family, “acquired” family, friends, neighbors, employers, employees, business partners, teachers, students, and so on.

In Jyotish, a major item is the birth chart. It is a map of the planets in the signs of the zodiac. Charts are cast based on an exact moment at an exact place on earth. Therefore, the moment a child is born and the place where he/she was born can be recorded. This information can be subsequently used to make his / her “birth chart” or “natal chart”.

A Vedic Astrologer uses information from the birth charts to understand what is important to each individual, to highlight what he/she is attracted to and what he/she has an aversion for. Our sense of self, relationships, education, career, finances, health, and spirituality are inextricably intertwined with our likes and dislikes. Thus Vedic Astrology acts as a tool to modify the themes and fixed patterns being played out in our lives, patterns that are activating pleasure and pain, joy and suffering.

The positions of the planets in the zodiac are taken and a person’s “dasha” (predictive timeline during which a particular heavenly body will predominate in a person’s life) are arranged. The Vedic astrologer looks at the planetary positions, signs and house placements in an individual’s chart to foretell the impending events of his / her life and the future possibilities − both good and evil.

This is the collective name for groups of stars that appear to form shapes in the sky. We use constellations (nakshatra in Sanskrit) to divide up the sky; finding one can help us find another because constellations move so slowly that, in our lifetime, they will always be found in about the same place. For instance the zodiac signs are a set of 12 constellations along the ecliptic. These constellations are:

The subtle influences exercised by the constellations is one of the factors considered for the purpose of calculations on which the findings are based.Thus when a planet passes through a zodiac sign, it is deeply affected by the influence of the stars in that particular constellation.

The tale of Rahu-Ketu

Rahu is the ascending lunar node. Ketu is the descending lunar node. The lunar nodes are the orbital nodes of the Moon, that is, the points where the orbit of the Moon crosses the ecliptic (which is the apparent path of the Sun across the heavens against the background stars). The ascending node is where the moon crosses to the north of the ecliptic. The descending node is where it crosses to the south.In Hindu mythology, Rahu is depicted as a snake that swallows the sun or the moon causing eclipses. He is depicted as a dragon with no body riding a chariot drawn by eight black horses. On the other hand Ketu is generally referred to as a “shadow” planet. It has a tremendous impact on human lives and also the whole creation. In some special circumstances it helps someone achieve the zenith of fame. Astronomically, Rahu and Ketu denotes the two points of intersection of the paths of the Sun and the Moon as they move on the celestial sphere. Therefore,Rahu and Ketu are respectively called the north and the south lunar nodes. The fact that Eclipses occur when Sun and Moon are at one of these points gives rise to the myth of the swallowing of the Sun.

This involves the choosing of the best date and time for conducting any auspicious, socio-religious ceremony or ritual. It helps in concentrating the energy of the planets and other astrological factors in an auspicious (rather flawless) way so as to nullify any evil influences, thus making the result of any ceremony or function performed, fruitful. For successfully conducting religious ceremonies such as (namakaran), thread ceremony (upanayan) tonsure (Mundan) and marriage (vivaha) etc., it is mandatory to ask a priest (pundit) to work out the auspicious moment or ‘Muhurta‘ when the ceremony should ideally be performed. 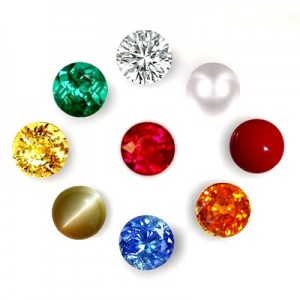 Almost everything in this universe is composed of seven basic colours. There are seven colours in a rainbow:
violet, indigo, blue, green, yellow, orange and red.

According to Hindu beliefs each planet emits certain cosmic rays, some beneficial while others are harmful. The ancient Indian sages had discovered that there are ways to counter the harmful effects of the planets. They came to the conclusion that as remedial agents, gemstones proved to be far more efficacious than herbs or metals. Gemstones function as cosmic filters, enhancing the beneficial rays and blocking the harmful ones.

According to ancient texts gems exert both positive and negative effects. It was observed that each planet is associated with a gemstone and every gemstone has the inner strength to absorb radiation emitted by a particular planet. Therefore, in order to achieve maximum benefits, gemstones of astrologically identified planets are to be worn, creating the right environment for good health, progress, happiness, growth and development.

Gemstones are chosen according to one’s birth chart, which records the planetary configuration at the time of one’s birth. The right gemstone of an appropriate weight has to be worn on a particular day, for best results.

A yagna is a religious or spiritual ceremony performed by a Hindu priest in order to alleviate karmic difficulties and this is generally the most preferred method to ameliorate a crucial situation or a dangerous, life-threatening period (dasa bhukti).

In the course of the yagna, the priest lights a fire, burns incense, myrrh and joss sticks; next he pours clarified butter (ghee) into the flames. This symbolizes the burning of the person’s negative qualities, ego and vices. The priest chants different astrological mantras for each of the original seven planets besides Rahu and Ketu. These mantras beseech the celestial beings and supernatural elements to remove all hurdles and obstacles during a person’s forward journey on the road of life.

This is a combination of divine syllables or sounds which when chanted with faith, devotion and emotions, reach the concerned deity and secure their divine blessings. These mantras have been evolved by the rishis(sages) and munis (hermits) who prepared and used them to for the well-being of all mankind. For divine help one must communicate with the divine forces. However, most human beings are unaware of these forces and hence do not develop any communion with the divine However if an individual chants (repeated uttering) mantra related to a particular deity on a regular basis the gap between him and the concerned divine force steadily decreases.By regular use of mantras a subtle link could be formed between the mortal and the divine. By means of this chanting one could obtain wealth, prosperity, fame fearlessness, success and spiritual upliftment.