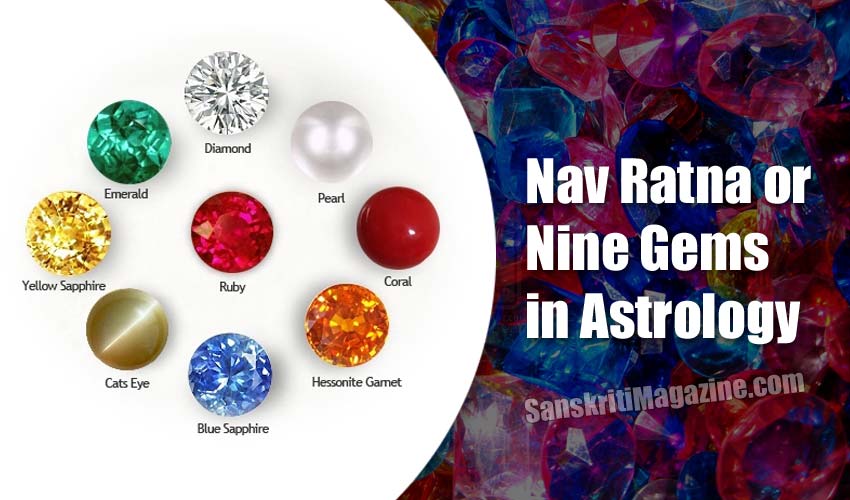 Gems are found in almost all parts of the word and are liked by all people irrespective of cast and creed. Gem stones are useful for our prosperity, health and fortunes as per the traditions in many religions. In Ayurveda gem stones are also used in medicines as bhasmas to cure many diseases. From experiments it has been proven that the gems has some effects on the human beings. Wearing a correct gem is helpful to attain good health, wealth, happiness and success. There are many gem stones in the world and they are categorizes in two categories one is Precious Gems and Semi Precious. There are nine precious gems which are called Nav Ratnas. These are very powerful gems which reflects the strengths of nine planets and have many great benefits on the humans if worn correctly.

The nine precious gems or Nav Ratans are Ruby, Diamond, Emerald, Yello Sapphire, Blue Sapphire, Gomeda, Pearl, Cat’s Eye and Coral. One should always wear a gem in a fashion that it touches the body. The cosmic rays of the planet related to the gem absorbed by the body through the gem and gives desired benefits. It is believed that all the negative energy of a planet is neutralized by the positive energy of the related gem and hence one can prevent him or her from the negative impact of the planet. Following are the brief qualities of these Nav Ratans:

Ruby: Hindi name Manik. The basic color of ruby is red. But it is also found in rose, black, yellow and sky blue colors. The planet of ruby is Sun. Ruby is having wave length of 70000. It is mined from the mother earth.

Diamond: Hindi name Heera. The diamond is found in white, yellow, red, blue and black colors. It is related with planet Venus. Its wave length is 60000. It is a very precious stone and is very popular among rich people. It is mined from the earth.

Emerald: Hindi name Panna. The color of emerald is green. The emerald of peacock color, parrot color and grass color have the best qualities. The emerald is related with the planet Mercury. Its wave length is 75000.

Blue Sapphire: Hindi name Neelam. As per its name it is found in dark blue, blue, and light blue colors. This gem stone is related with planet Saturn. Its wave length is 79000. This is also found below the earth surface.

Cat’s Eye: Hindi Name Lehsunia. The color of this stone is yellowish or blackish yellow. This also has a visible shining band inside which moves when the stone is turned. It resembles as cat’s eye. Cat’s eye is related with the planet Ketu and is having a wavelength of 70000. It is also found in the earth surface.

Pearl: Hindi name Moti. The basic color of this gem is white but it is also found in yellow, red or black colors. It is found in the sea. Its wave length is 70000 and it is related with planet moon.

Red Coral: Hindi name Moonga. This precious gem is found in orange red color. White corals are also available. It is related with planet Mars and its wave length is 65000. It is found in the sea.

Yellow Sapphire: Hindi name Pukhraj.The color ODF yellow sapphire is light yellow. It is related with the planet Jupiter and it is having wave length of 50000. It is found in the earth surface.

Hessonite: Hindi name Gomed. The color of this precious stone is honey color. This is related with planet rahu. It is having wave length of 70000. It is also found below the earth surface.

Gems should be fixed in the ring in such a way that they should touch the finger so the positive rays can pass through gem to our body. Gems are worn as per the birth chart as well as the current chart. The right quality and size are very important in providing the good benefits. Also gems should be worn in the right finger and hand. The right hand is called solar hand and the left hand is called moon hand. It is believed that the gems related to high energy stars like Sun, Saturn, Mars, Rahu and Ketu should be worn on left hand i.e. moon hand to balance the energy and the other gems related to moon, Mercury, Venus and Jupiter should be worn on right hand. All the fingers are also related with certain planets so one has to choose right finger also. The details of all the precious gems are available in separate articles.