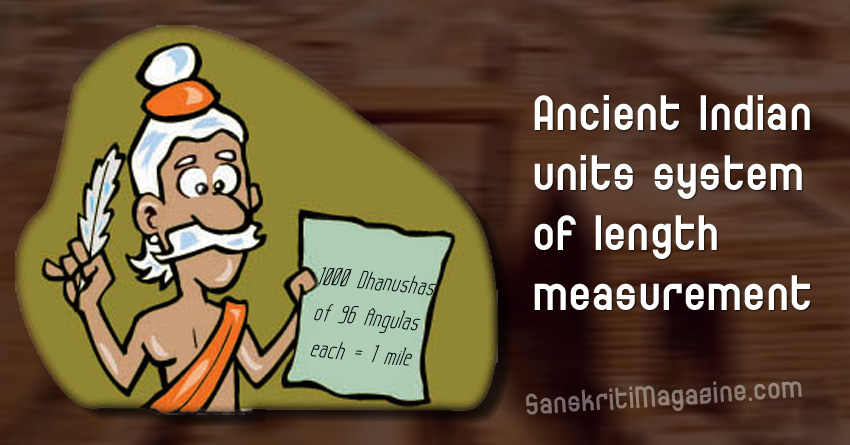 An exact value of the unit of length measurement, used in Ancient Indian Indus Valley Civilization, has been determined from the precise scale discovered by Ernest Mackay in the 1930-31 season excavation at Mohenjo­-daro, and further correlated with the present day units of measurement.

In his 1930-31 season at Mohenjo-daro, Ernest Mackay discovered a broken piece of shell bearing 8 divisions of 6.7056mm each, with a dot and circle five graduations apart, which suggests a decimal system. However, attempts by Mackay, to relate such a unit to the dimensions in Mohenjo-daro, were not very successful and thus were abandoned.

Units of Length in Chanakya’s Arthashas­tra

Chanakya was the political mentor of the legendary Indian monarch Chandragupta Maurya of 4th century BC. He was a man learned in many disciplines and wrote the famous book Arthashastra. In Arthashastra, Chanakya mentions two types of Dhanushas as units for measuring lengths and dis­tances. One is the ordinary Dhanusha, consisting of 96 Angulas, and the other Dhanusha is mentioned as Garhpatya Dhanusha and consists of 108 Angulas, used for measurement of roads and distances. Chanakya also men­tions that a Dhanurgraha consists of 4 Angulas and a Yojana consists of 8000 Dhanushas.

If we keep 10 divisions of the Mohenjo-daro scale to be equal to a Dhanurgraha or 4 Angulas, the precise length of an Angula works out to be 16.764mm.

Interestingly, when we look into the history of mile, we find that the word mile is derived from mille, which means a thousand.

The Indus civilisation unit of length, widely known as Indus Inch was 1.32 Inches which is exactly equal to 2 Angulas of 16.764mm each.

The Gudea’s rule (2175 B.C.) preserved in the Louvre shows intervals in Sumerian Shusi of 0.66 inches, which is exactly equal to the Indus-Saraswati Angula of 16.764mm.

It is interesting to note here that Mackay reports at Mohenjo-daro, a lane and a doorway having both a width of 1.42m, which is precisely equal to one division of the second scale at the Tiruputtkali Temple, indicating that both the scales were prevalent in Indus-Saraswati Civilization as well as in South India.

Correlation with Dimensions of Ancient Struc­tures

The height of the corbelled drain forming the outlet of Mohenjo-daro’s Great Bath is about 1.8m, which is equal to a Dhanusha of 108 Angulas of 16.764mm each.

Kalibangam, a city in the Indus-Saraswati Civilization (in Rajasthan, India) had street widths of 1.8m, 3.6m, 5.4m and 7.2m i.e. built to the stan­dard dimensions being equal to 1 Dhanusha, 2 Dhanushas, 3 Dhanushas and 4 Dhanushas respectively. Such widths are found at other sites also. Big­ger streets of Banawali another town in Indus-Saraswati Civilization (in Haryana, India) measure 5.4m i.e 3 Dhanushas.