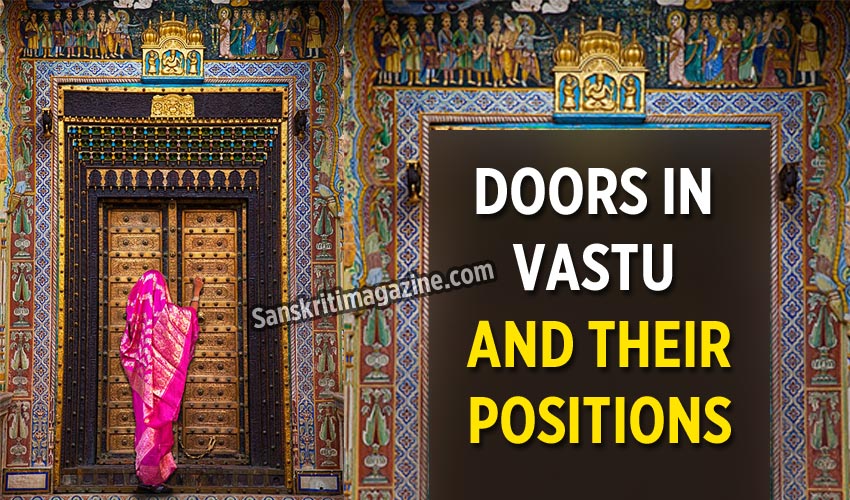 While fixing doors in the walls, the following points should be kept in mind:

All the doors fixed in the parallel walls should be in the same line.

Extended sides and diminished sides of sites and their consequences:

Vastu Doors: Places of the Doors and Windows

A house can have the doors on all sides. A house needs doors, windows, shelves and ventilators. These things should be in even number. The house-owner should avoid round figures having a zero such as the numbers 10, 20, 30 etc. The door is to be kept opposite to another door. A house should not have three doors. The south-western side of the house is considered to be the mean sides and the north and the eastern sides are considered to be the good sides.

Big doors and big windows are to be fixed on the southern and western sides.

Small doors and small windows arc to be fixed on the eastern and the northern sides. The level under the threshold on the southern and the western sides should be over and above that of the eastern and northern sides. The level of the floor inside the rooms should be comparatively low and water should go out through the north-east corner. While fixing the doors and windows, we have to take necessary/ precautions so that the edges of the walls of the other houses and the roofs of the thatched and tiled houses should not be in their direction. Doors should not be fixed so that they face the roads coming in opposite direction. If the roads come in opposite direction and face the door, the house may yield to negative results.

The house which has its main door on the eastern side is the house with eastern simhadwara (the main door).

The house with eastern simhadwara should have its staircase on the south-east or the south-west Or the north-west corner. It should not be on the north- east corner.

Such a house is to be built leaving the minimum extent of site on its southern side and leaving so many sites on the northern side. It is better to have verandahs on its northern side. The movement of water inside the house should lead to its north-eastern corner, if the house has so much of site on the north, it yields good results and the family prospers. The staircase again should be on the south-east corner or on the south-west corner or on the north-west corner also.

The house which has its simhadwara on its northern side is the house with north simhadwara.

Some people build houses keeping the main door on the south-east corner of the house. In such cases, the dwellers of the house are prone to several troubles including huge financial losses, fire accidents, thefts etc, They may take to gambling, prostitution etc.

Some people build houses keeping the main door on the south-west corner of the house. Such house yield to bad results such as premature deaths, making many enemies, incurring financial losses and the owner may suffer many set-backs.

When people build houses keeping the main door on the north-west corner of the house, they may make enemies, get imprisoned, become ill, mad etc.

The house with its door on the north-east corner leads to so many good results, such as wealth, prosperity. The people who live in such houses become influential, they make many friends, they prosper in business, in such a house, the north-eastern room should be in a lower position comparatively. The owner should use that room for worshipping God.