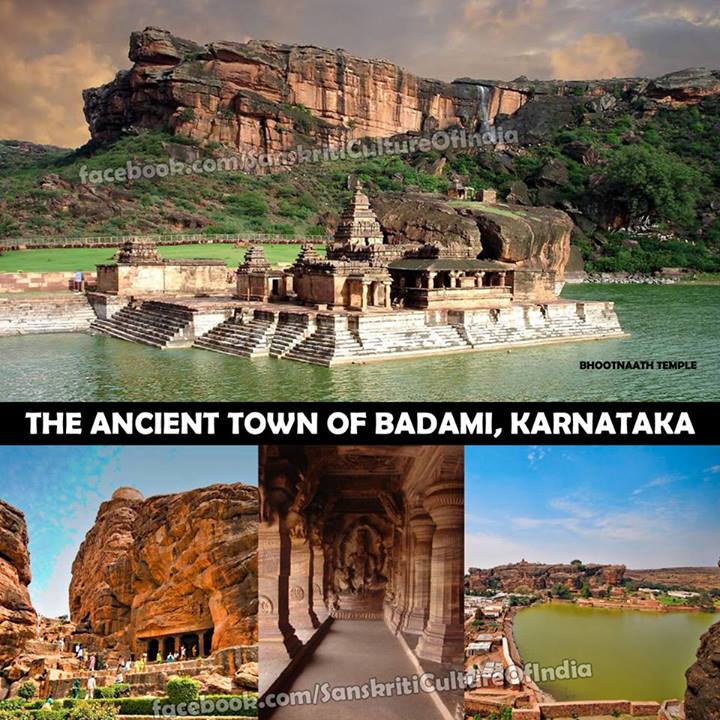 Badami is dotted with ancient temples and monuments. The city finds its mention in history dating back to 1500 years. The city has survived the test of time and still is a wonder to tourists.

India is a land of ancient wonders, some of which have been washed away and buried in the sands of time, whereas a handful of them have survived the onslaught of time and transition. One such successfully striving story is that of the Ancient Town of Badami, formerly known better as Vatapi. Vatapi (Badami) has been existent for almost 1500 years, and it is an integral hub for religion and tradition in the Bagalkot district.

This city got the name Badami as it was the capital city of the Badami Chalukya clan. Another rich attribute that made the Ancient Town of Badami a much sought after destination was its divine heritage in rock cut and other well designed structural temples.

Badami is located near the Agastya lake; according to an ancient legend, the mythological demon Vatapi helped the city acquire its famous name. However, with the development of more prominent local structures and temples in sandstone resembling ‘badaam’ (which means almonds in Hindi), the name of the city finally changed to Badami.

The historical facts can be traced back to the early fifth century when the Chalukya dynasty developed the then Vatapi with some magnificent creation of cave structures. Furthermore, the Badami Cave Temples that gave this place a distinct recognition came about somewhere between the sixth and eighth centuries AD.

These cave temples adjoining the Ancient Town of Badami are dedicated to both Hindu and Buddhist Jain deities. Lord Shiva, Lord Vishnu and the Jain Tirthankaras had a lot of followers, and relics can still be obtained on exploration.

An interesting find are the century-old caverns with depth and carved imagery. The main subject is keeping in line with the prevailing trends back then. They mainly cover Hindu Gods and Goddesses under boulder and red sandstone. Modern archeologists and historians find this place a great legacy in order to further research the contemporary ethics and styles in south Indian art and architecture. Do not miss to visit Badami and your South India trip.

Temples and Forts in Badami

In present-day Karnataka, the Ancient Town of Badami occupies an important position in the cultural and archeological legacy passed on from ancient civilizations. Along with the revered cave temples, there is a host of forts, landmark gateways and inscripted sculpture. Some famous national landmarks and venues of tourist attraction are as follows:·

The Bhootnath Temple located atop a hillock with the shrine facing the forts.

Buddhist caves amid natural backdrops (famous for being accessed only by crawling).

A string of Shivalayas, including the Malegitti Shivalaya, dating back to origins from the seventh century.

The Dattatreya and the Mallikarjuna Temples, which date back to the eleventh century, and the famous temple of Banashankari, which is the family deity for innumerable clans.

An Islamic Dargah that is located in the south direction.

Vista points on top of the North Fort along with an archaeological museum, which is famous for its collection of sculptures from Badami and Pattadakal.

The local population of Badami speaks Kannada. Badami can be accessed at about 30 km from Bagalkot and roughly at the same distance from Bijapur as well. Bangalore is roughly around 600 km away.