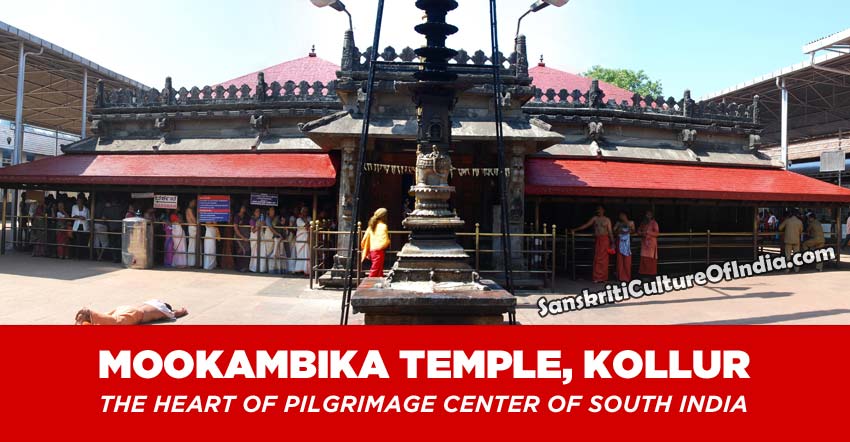 Kollur, in the southern Indian state of Karnataka, a place referred to in the Skanda Purana, and believed to have been the refuge of several sages and yogis, including the Adi Shankaracharya, is one of the most revered pilgrimage sites of South India.

The temple of the Goddess Mookambika, Mother of the Universe, is situated in Kollur, 140 kms away from Mangalore, in the southern Indian state of Karnataka. The holy shrine is in the foreground of lush tropical forests covering theKudajadri hills on the banks of river Souparnika, which is a confluence of the mainstreams Kasitheertham and Agnitheertham originating from the Kudajadri hills.

In this ancient temple, the Mother of the Universe is represented as a young girl sitting in the mystic Padmasana yogic pose, four-armed, holding the conch and the discus, and expressing the “Abheeshta” and “Abhaya” mudras that promises life’s natural desires and fulfillment, and the assurance of freedom from fear respectively.

It is believed that the graceful idol, made of an alloy of five metals (Panchaloha), was installed by Sri Adi Shankaracharya himself. Before Sri Shankara’s arrival there was only the Jyotirlingam in the shrine, almost flat and round, placed in front of the idol. Inside the Sreekovil (the inner recess) prayers can be offered to Lord Ganesha and at the Shankara Simhasanam, the spot where the holy saint meditated and had the gifted vision of the Universal Mother. Outside the central shrine are placed the accompanying deities or “Parivaara Devatas”: Sri Veerabhadra Swamy, Panchalingeswara, Shri Paarthesara (different manifestations of Lord Shiva), Lord Subramanya and Devi Saraswati. On the left of Shri Paartheswara shrine is the temple of Shri Panchamukha Ganapati – the five-faced Lord Ganesha.

The 1400-meter high Kudajadri Hills with its diverse fauna and flora are a treat to trekkers and nature lovers. As one treks through the jungles with its rugged wild terrain, he encounters two small shrines. In the first shrine the goddess is worshipped in her terrific form and in the second, in her beautiful and merciful form – Uma. Vedic rituals as performed here. Climbing further, one reaches the Ganapati Guha with an ancient idol of Lord Ganesha. Further up, on the hilltop is the Shankara Peedam where Sri Adi Shankaracharya is said to have immersed himself into deep meditation. The entire structure is made of granite and resembles a “Meru” – a three dimensional form of the mystic design called the “Srichakram”. One has to descent steeply on the western side of the hill to reach a holy cave called Chitramoola, another place where Adi Shankara meditated for several days.