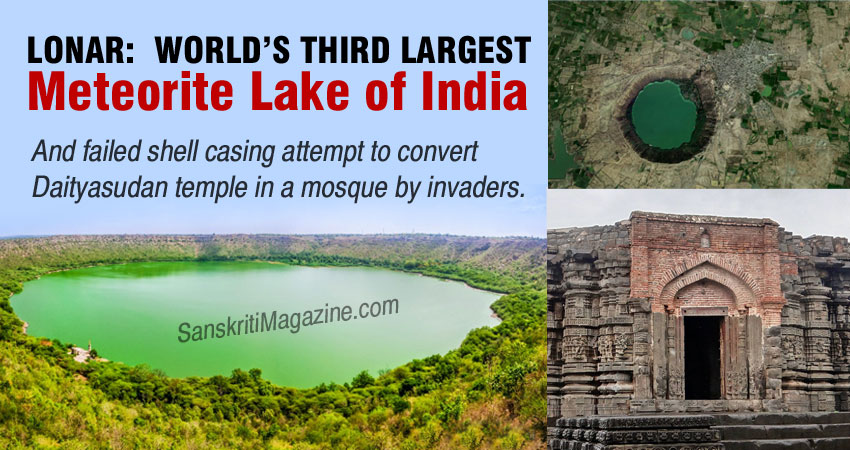 Approximately 52,000 years ago, a 60m wide meteorite weighing 2 megatons made an impact which formed a circular crater 1800 meters in diameter and 150 meters deep in Buldhana district of Maharashtra.  This crater is the only hypervelocity meteoritic impact crater on basalt rock and the lake that formed on it is both saline and alkaline in nature.  It is also the third largest Crater Lake in the world.

Known as the Lonar Lake, the crater has been described in many ancient texts such as RigVeda, Ramayana, Puranas etc.

The Skanda Purana states that a demon named Lonasur used to reside here with his sisters and harassed the people in the area who appealed to Lord Vishnu to destroy him.  Lord Vishnu took the form of his avatar named Daityasudan and slayed the demon.  It is believed that the water of Lonar Lake gets its colour from the mixing of his blood and the salts through his flesh.

The Lonar area has been a part of various kingdoms ruled by Ashoka, Satavahana, Chalukya, Rashtrakuta, Mughals, Yadavas, Nizams, Marathas and the British respectively.

Lonar was called Dakshina Dwar (Gate to the South) during Ashoka’s time.  Many temples and monumental structures still exist today at Lonar but are mainly in a sad condition due to lack of proper care.  Some noteworthy temples are Rama Gaya Temple, Mahadeva Temples, Brahma-Vishnu Temple, Kartikeya Temple, Jain Temple, Vishnu Temples, Shukracharya Observatory and the Daitya Sudan temple.

Originally believed to be a Sun Temple, Daitya Sudan was built in Khajurao style during the Chalukya rule between 6th and 12th century and has an idol that is composed of a stone-like ore with a high metal content.  However, today in the present form, it is dedicated to the Daitya Sudan avatar of Lord Vishnu.

The ceiling of the temple has carvings and the exterior walls are also layered with carved figures. The plinth of the temple is about 1.5 m in height and the unfinished roof suggests an intended pyramidal form for the tower.

There are clear visible evidences of invading Muslim forces who tried to convert this historic Hindu temple into a mosque.  Attempts have been made to layer the main gateway of the temple with red bricks in Islamic style.

A festival is held every year during Navaratri for Goddess Kamalaja and pilgrims flock along the rim of the crater at this time to pay their respect.

The lake water consists of sodium chloride, carbonate and fluoride and is highly alkaline due to perennial streams.  A location named Sita Nahani where Sita is believed to have taken a bath has sweet water.  The other two smaller crates, believed to be pieces of meteorite split from the bigger counterpart are called Ambar and Ganesh.  A rare mineral called maskelynite has been found near the crater.

Today it is surrounded by forests with a large variety of birds and animals such as peacocks, owls, red-wattled Lapwings, ducks, monkeys, lizards, mongoose, fox etc.  Many fruit, medicinal and aromatic plants are also known to exist here.  In fact, it is a haven for scientists, geologists, archeologists, naturalists, astronomers to name a few and offers much more than just being a hot spot for wildlife enthusiasts or religious pilgrims.

It is very disappointing to note that Archaeological Survey of India has done next to nothing to preserve the ancient relics at Lonar.  Most of the monuments have either been pilfered or damaged by nature and the remainder spoiled by trigger happy graffiti mongers, leaving their mindless ugly marks on such ancient and beautiful relics of a bygone era which should have been cherished instead.

Lonar is an extremely beautiful place and the State declared it to be treated as an Abhayaranya or Sanctuary that needs to be protected and preserved not only for its scenic beauty but also for its specialized properties, a rare and unique mixture to be found anywhere in the world.

Bhaja Caves: The Wonders of Carved Stones
Why are there no Temples of Brahma?
Comment