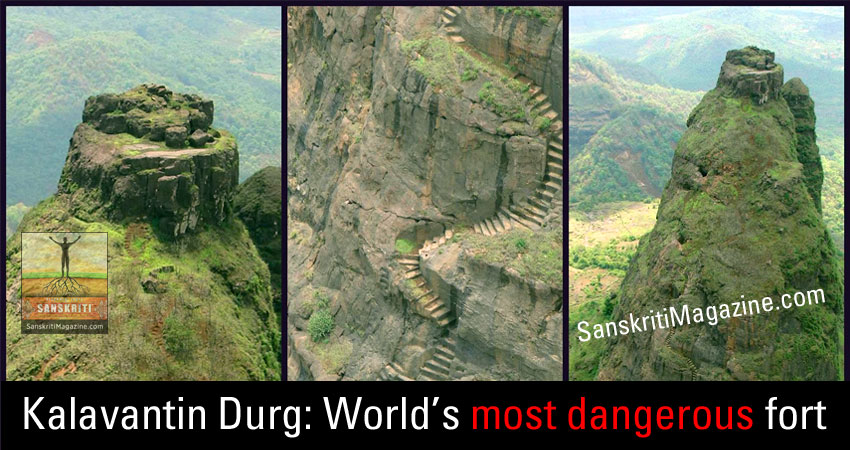 Located at an elevation of 2,300 feet in the Western Ghats near Mumbai, the Kalavantin Durg is a truly amazing feat that was used as a watch tower in the past.

As one of the 23 forts that were handed over to the Mughal Empire by Shivaji according to the Treaty of Purandar in 1665, it was later reclaimed by the Maratha forces in 1667.

The fort is believed to be built around the time of Buddha or approximately around 500 BC for a queen named Kalavantin whose story seems to have been lost in the mist of time.

One of its most impressive features is the steps leading up to the fort that were cut into the rock of the hill with such perfection.  There are no railings on the edge and no ropes on the wall to support the climb, which makes the climb down pretty tough to handle if one suffers from vertigo.

The steps up to the peak are almost a three hour climb while getting to the fort is yet another challenge to face, recommended only for the experienced trekkers.  However, once at the summit, the panoramic view is breathtaking and one easily forgets the climb or the throbbing body ache as the entire valley unfolds in front of you!

Not only the city of Mumbai can be viewed from here but also other forts like Peb, Chanderi, Materan, Karnala and Ershai are a sight to see.  Accessible from Mumbai-Pune Expressway, the fort is a main tourist attraction and it no longer holds any military significance as was the original intent.

On every Shimga Festival of Holi, locals from Machi-Prabal Village dance on top of the fort and they consider it a part of their culture and heritage.

Kalavantin Durg’s location and treacherous steps up to the top have given it the rightly deserved reputation of being the most dangerous fort in the world.