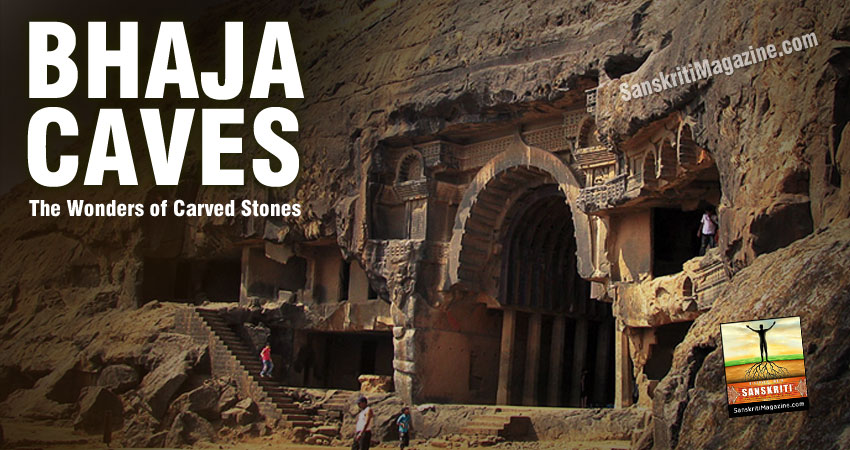 Bhaja Caves are one of the more popular Buddhist caves located at a distance of 12 km from Lonavla, in Pune district of Maharashtra, India.  Lonavla is also known as the ‘Jewel of the Sahyadri’. The area was also in occupation during medieval period is attested by two Maratha forts, Lohagadh and Visapur along the adjoining hill top.

The importance of Bhaja is further enhanced by the presence of two more monastic complexes namely Bedsa located on the south face of the same hill in which Bhaja is situated and Karla, directly opposite north of Bhaja nearly 5km from the latter.

These caves share the same importance as those of others in Maharashtra, including the Ajanta, Ellora and Elephanta. They are believed to be built during the Mauryan rules in the early Theravadin phase of Buddhism.

The caves represent Lord Buddha in a symbolic form whereas others have been representing events which took place in His Life. The caves, 18 in number, are beautifully sculptured with many images of different postures of Buddha, some animals and situations of some stories from tales of Buddhism.

As usual with cave culture, there are many Viharas in Bhaja also, which most probably served as hostels for the learning Buddhist monks. The caves are also interesting for the fact that they are one of the oldest among all caves in India. The stupas – a common feature to all the caves, also add to the fact that these caves despite being at different places, were motivated by the same motifs.

The pillars of these caves can be seen sloping downwards, some of them carved with figures of flowers and other images. Cave No. 12, a Chaitya hall, which is the largest of all has a fine stilted vault. The last cave towards the south illustrates the intricate architecture and sculpture in ancient India. This cave includes the pictures of a dancing couple, a prince seated on an elephant and other images. Cave No. 1, a dwelling house, and other 10 caves, which were viharas are master pieces of the architecture with a religious background. The remaining 7 caves contain inscriptions about the donors.