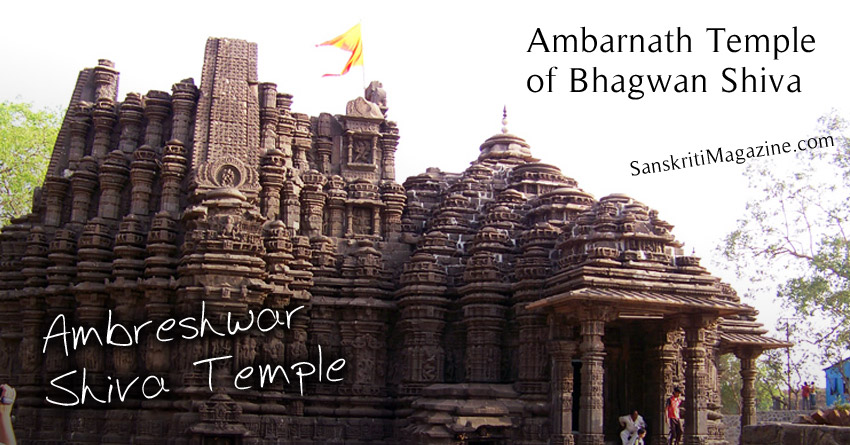 Ambarnath is part of Mumbai Metropolitan Region (MMR). The name Ambarnath literally means Sky-Lord. Ambarnath is the site of a old Shiva temple.

The Shiv Mandir of Ambarnath is also called the Ambreshwar Shiva Temple. It is situated 2 km away from Ambarnath (East) railway station in Maharastra, India. It is said that Shilahara king Chhittaraja constructed it, his son Mummuni rebuilt it. The temple is on the bank of Vadavan (Waldhuni) river. The temple is Hemadpanthi-styled, beautifully carved on stones. It is also believed by some people that the temple was built by the five Pandava brothers in just one night in a huge single mass of stone.

Local excavations have shown that Ambarnath was a populated center as early as 200 BC. The village was originally known as Hallyacha Pada, and was later renamed Ambarnath. Guru Nanak visited the temple sometime around 1415. Devotees still throng to the temple for Shivartri each year.

The construction of Ambarnath Shivalaya was done in local black stone and lime, in a style typical of 10th century Hemadpanthi temples. This category of temple is a subset of the Vesara style, a combination of Nagara and Dravidian architecture from Central India. The Ambarnath Temple is often compared to the famous Dilawara temples of Mount Abu, for their similar quality of architecture and ornamentation.

The temple is heavily ornamented inside and out, replete with excellent sculptural works. The temple plan is corrugated, or fluted along its edges, resulting in a large wall surface that accommodates the many sculptures and other decorations typical of this style. Carvings of a predominantly Shaiva theme form a chain around the temple exterior, at eye level, although some have been lost to time and the elements due to the soft nature of the stone.

The partial roof is supported by an array of pillars, also beautifully sculpted. Even the ceiling has richly carved details. To reach the sanctum sanctorum, one has to climb down from the main hall. The linga located in this underground sanctum is open to the sky.

In the ASI report quoted in our segment on the Sopara Brahma, Inscriptions of the Silaharas, we read this very detailed description of the temple at Ambarnath:

“Fortunately, the date of this temple is definitely known. In Inscription No. 17 it is called Sti-Ambatandtha-devakula and is there connected with the name of the Silahara king Mahamandalesvara Srl-Chhittarajadeva. The inscription records a date of the reign of Maha-mandalesvara Srl-Mamvamrajadeva, viz , Friday, the ninth tithi of the bright fortnight of Sravana in the Saka year 982, corresponding to the 27th July AD 1061.

The temple stands in a hollow on the bank of a small stream at a short distance east of the village Ambarnath. Generally, such temples are erected on a high platform called jagati. The reason for the construction of the present temple in a hollow seems to be that the Swa-linga enshrined there is of the svayambhu (self-existent) type, which the great Sanskrit poet Bhavabhuti has described as a-pawusheya-patishtha (not installed by any man). For the same reason its gaibhaguha (sanctum) is eight ft. below the level of its other parts. One has to descend nine steps to reach the Swa-linga there.

This temple faces west and measures 60 ft. in length. It must have originally had a small shrine (devakuli) foi Nandi (Siva’s bull), but it has now disappeared. There is a small Nandi placed in the western porch, but it is not very old.

The temple consists of the garbha-graha (sanctum) and the mandapa (hall), both square in shape, which are diagonally connected. The mandapa is provided with three entrances on the south, west and east sides, each with its own porch. Gousens has thus described the construction of its parts:

“The plan, as will be seen, is peculiar, being apparently made up of two squares set diagonally to one another, touching corner to corner the smaller being the shrine, the larger the hall. But in reality it is formed of two squares touching side to side, whose sides have been whittled down to narrow panels by the deep recessing of corners into a line of angles running straight between the diminishing sides. This produces very unequal thickness in the masonry, but at the same time, as will be seen in the photograph, these heavy masses come immediately under the heavier portions of the sikhara above.”

In the hall, the recesses of the doorways tend to equalise the thickness of the walls, the weight of the roof being more equally spread over them. Yet these are places where the masonry seems to be dangerously thin. The projections around the walls form so many buttresses to strengthen them. As with all this class of old work, the masonry is put together without cementing material, the stability of the mass depending upon the weight and the level bedding of the blocks composing it. The varied treatment of the squares in designing the plans of these temples, the sides being more or less broken up by projections and recesses, tends to produce somewhat fanciful, yet, nevertheless, pleasing- looking figures.

The sanctum is thirteen ft. in length and breadth. From some broken ledges of masonry at the height of eight ft. above the ground level of the sanctum, Cousens inferred that there was an upper floor of the shrine with a duplicate Siva-linga for daily worship. He thought that the floor of the upper shrine was crushed down by the fall of the sikhara. This is hardly likely. As the Swar-linga was swayambhu, the sanctum had to be so much below the level of the mandapa. As several steps were required to reach the low sanctum, the door had to be brought forward, sacrificing nearly the whole of the breadth of the usual antatala, or antechamber.

The door of the sanctum is 9 ft. high and 4 ft. broad. It has on its architrave the figure of Siva engrossed in meditation in the centre with those of a yogi, an elephant and a lion by his side On either side of the door there are three figures, about two ft. high, the central one, a male figure, having a tiara probably representing the contemporary king, with a male and a female figure on his two sides. There is a niche on either side of the doorway, the light one has an image of Ganapati, while the left one is now empty.

The mandapa has four richly carved pillars forming a square in the centre. They are ten ft. high and vary in girth from ten ft. at the base to five ft. in the middle. They are nearly square at the base, change into octagons at about one third of their height, and have round necks and round capitals. They are richly carved with (?) and human figures. They support a dome about five ft. from the outer rim to the center. It uses in a series of concentric circles to a central pendant. The lowest circle is decorated with a running scroll, while the remaining four are scooped out into half cup-shaped and cusped hollows. (illegible) of an effective play of light and shade.

Each of the three porches on the three sides of the mandapa has (?) pairs of pillars richly carved, about ten ft. high and five ft. round, supporting a dome above. Two of these pairs are detached, while the third is half built into the wall. The ceiling is flat and is carved in geometrical designs.

The basement of the garbha-graha and the mandapa is decorated on the outside with rows of kittimukhas, elephants (gaja-thara) and men (nwa-thata). The row of horses (asva-tkaia ), which also appears in such places, is here conspicuous by its absence.

The outer walls of the temple are decorated with the images of gods and goddesses, hermits and heavenly nymphs (Swa-sundaris) Some prominent deities have larger niches assigned to them. Generally, the niche on the back wall of a temple is regarded as the principal one, from the image in which we can determine the deity to whom the temple is dedicated. In the present case that image is of three-faced Siva as in the Elephanta Cave. But the image is standing, not a bust as in the latter place. It has a jata-mukuta and wears such ornaments as a necklace, a mekhald (girdle), bracelets and foot-ornaments It had eight arms, but most of them are now broken except the upper left, which holds a serpent. On each side of it are shown two ganas (attendants) in a small form.

In the chief niche on the north is an image of eight-armed Mahakali in a terrible form with a thin shrivelled body and drooping breasts. She wears a necklace of human skulls hanging to her feet, and holds various weapons such as the dagger, the sword, the trisula and the khatoanga. She is shown dancing, with the limbs bent and serpents twined around her neck and waist. On her two sides are shown her devotees as shriveled as she. The whole panel is revolting.

Below this image of Mahakali there is that of Brahma. He is shown in the almgana-murti form, with his wife Savitri on his lap. He holds the sacrificial ladle (sruch), the unbound book, the rosary and the kamandalu m his hands Brahma is four-faced, but here only his three faces are seen, the fourth being hidden from view His vehicle, the swan, is shown below his right lap.

[ ] The sanctum, the mandapa and the three porches have separate sikhams. The vkhua on the sanctum has mostly collapsed, but the part on the north is still extant from which one can form an idea of the original spire. It is the Deccan type of the North-Indian tikkaa

[ ] The Ambamath temple is regarded as the earliest and best example of the Deccan type of architecture. It evinces the interest that the Silaharas of North Konkan took in constructing magnificent temples of their gods and goddesses.” 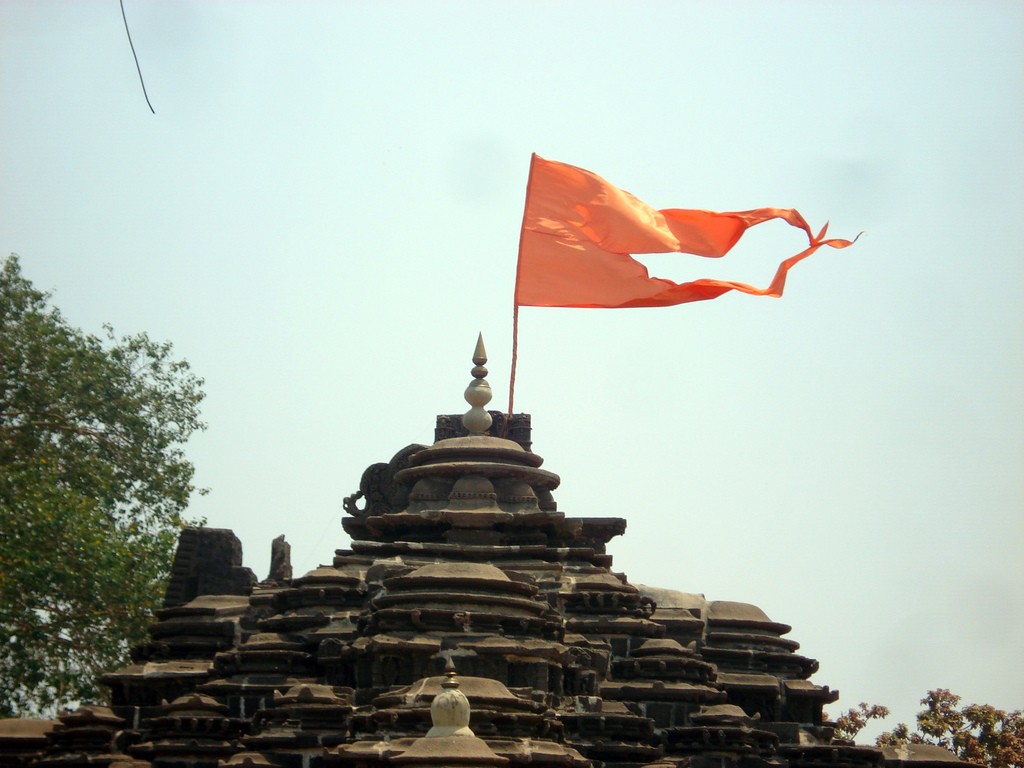 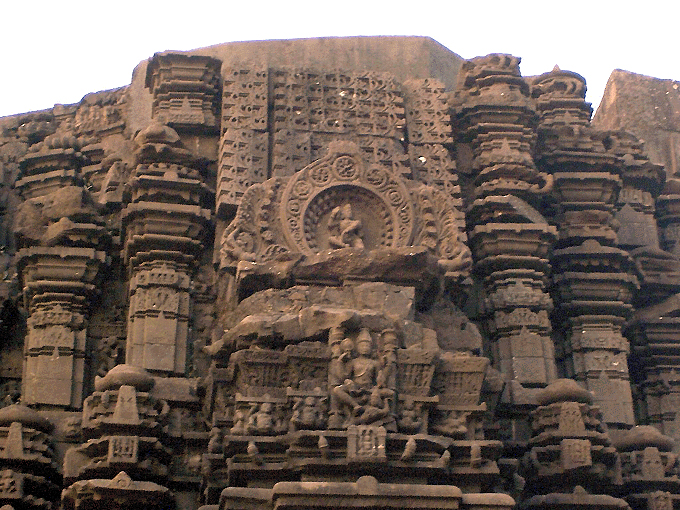 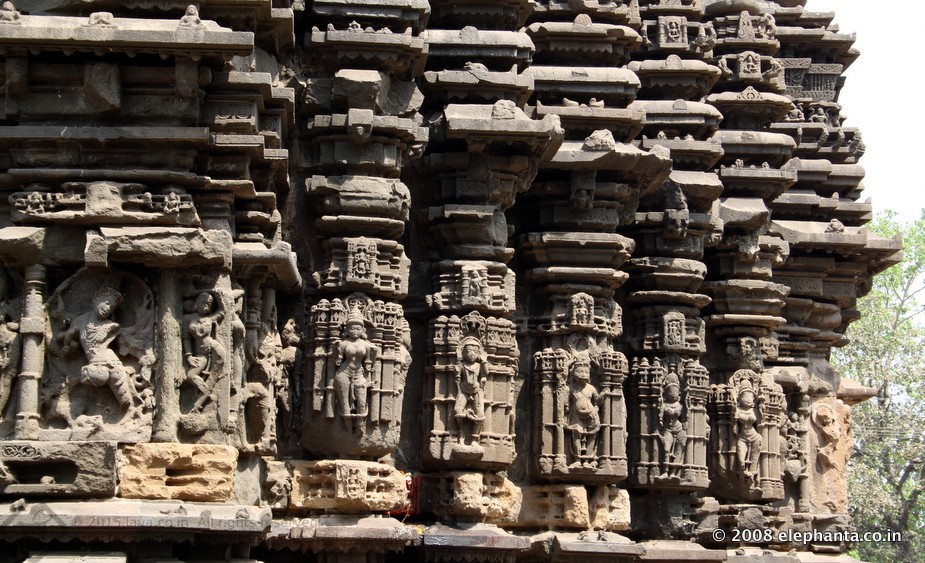 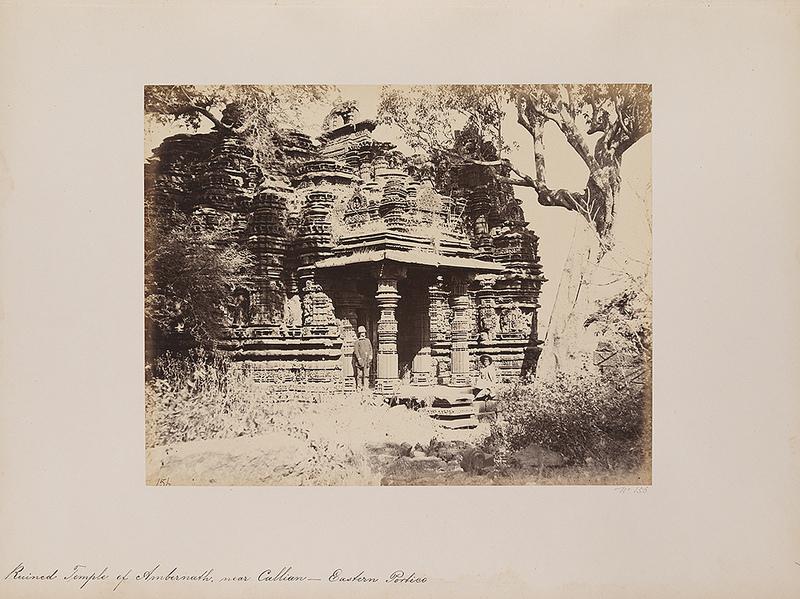 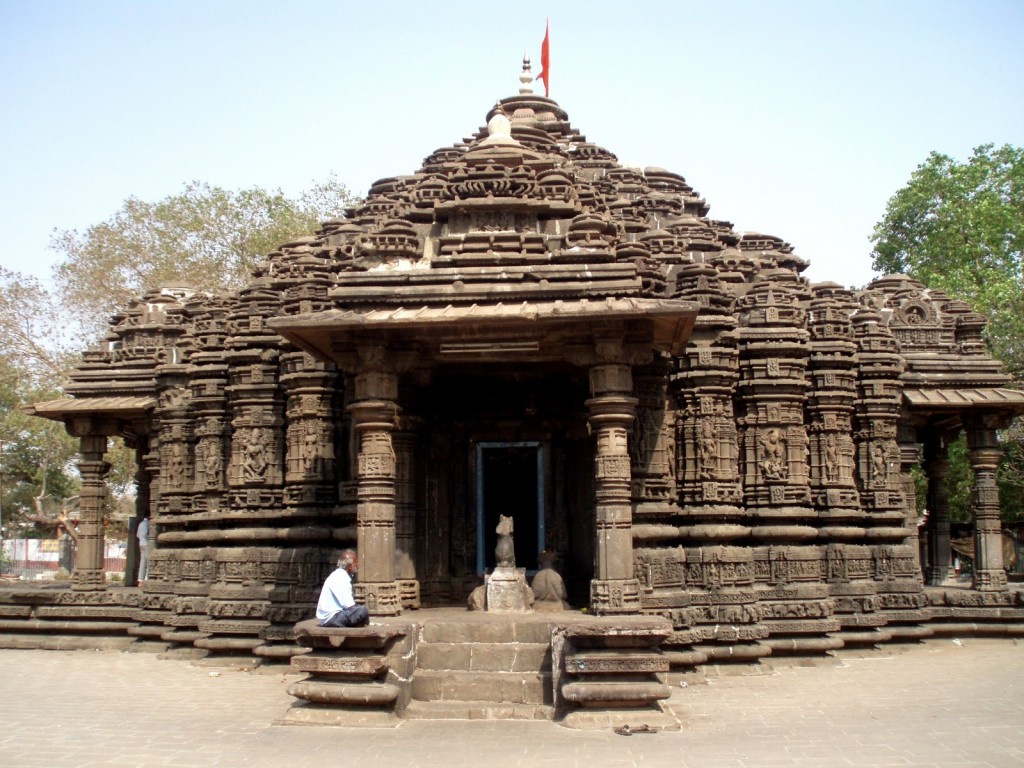 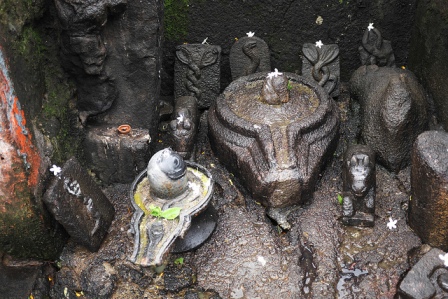