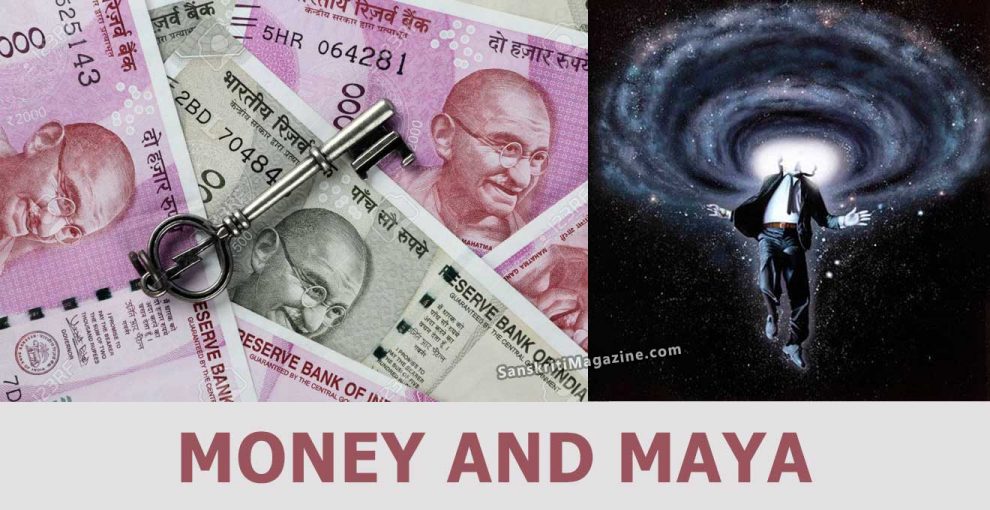 Money gives us a sense of freedom and ownership. We feel that with money, we can own anything or put a price tag on anybody’s services.

Ownership of something means total control of its existence from beginning to end. How can you own something that outlives you?

Money also gives the idea that you are powerful and independent, blinding you to the fact that we live in a world of interdependence. The awareness of dependence makes one humble.

When people lack faith in divinity and in the goodness of society, they suffer from a deep sense of insecurity. Then, all that appears to provide security is money.

Due to the illusory notions of independence that it brings, money is considered a part of maya: miyate anaya iti maya means “that which can be measured is maya”.Human values are eroded when you try to put a price tag on all that cannot be measured, like truth, and life itself.

There are also those who blame money for all the ills of society. Not only does possessing money bring arrogance, rejecting it does, too.The ancient sages never denigrated money or maya. They honoured it as a part of the divine and thereby transcended the grip of its illusion.

They honoured wealth as Goddess Lakshmi, born out of Yoga. It is the wisdom of Yoga that transforms one from arrogance to self-confidence, from the burden of dependence to the realisation of interdependence, from craving for the freedom to the recognition of unbounded-ness, from a limited ownership to oneness with the whole.

Nishkama Karma will Liberate you
Satsang for your psyche
Comment