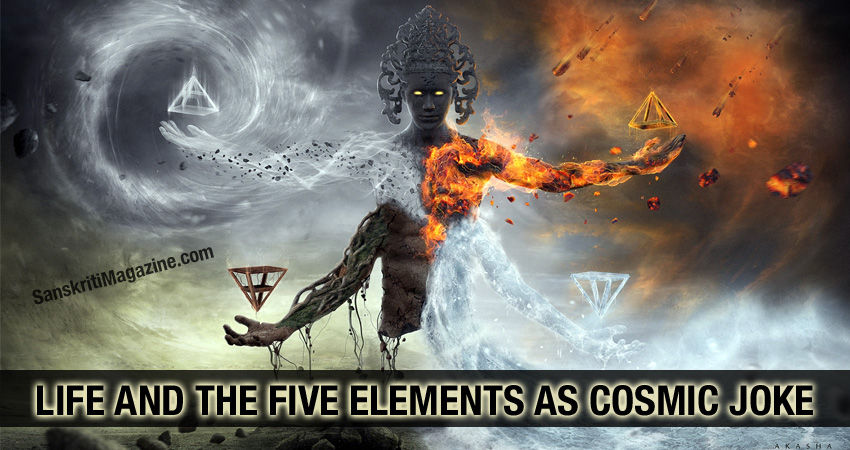 Some time ago, when driving after midnight, I approached a mountain that seemed to be half ablaze. It was misty and as I drove cautiously up the mountain, the fire always seemed a little farther away. When I reached the actual site, I saw just a broken-down truck and a small fire built by the driver because of the cold! As the mist reached dew point, the million droplets acting as a prism, creating such a phenomenal illusion that a little fire seemed like a huge conflagration. That incident left me astounded.

Creation is just like that — hugely magnified. Those who have looked within themselves closely realise that there is no need to look at the macro version. The entire cosmos is just a magnified projection of a small occurrence happening within you – the mischief of five elements. This is all it takes to make a throbbing full-fledged human being!

Imagine, life is a game with just five ingredients. Making even a sambar takes at least thirteen ingredients! But both the human body and the cosmos are based on the jugglery of only five elements — earth, water, fire, air and space. Such a staggeringly complex phenomenon and just five variables! Not surprisingly, those who attained Self-realisation have often termed life a cosmic joke.

Whether your physical body is a stepping-stone or a hurdle on your path to well-being, essentially depends on how you are able to manage these five. If they do not cooperate with each other, nothing significant ever happens to you. But with their cooperation, your life – from the basic to the highest aspects – suddenly becomes a tremendous possibility.

This explains why every spiritual practice in the world is related in some way with organising these five elements. The most fundamental practice in the yogic system is ‘bhuta shuddhi’. This is a way of cleansing the elements in the physical system so that they work in harmony. When you achieve a level of expertise, you attain what is called ‘bhuta siddhi, or mastery over the elements. With this mastery, life opens up its bounty to you. Health, wellbeing, clarity, enlightenment – none of these can be denied to you anymore.

The very existence that traps you also sustains you. This is the paradox of the life process. Love and hate, freedom and bondage, life and death are all encapsulated in each other. If they were separate, there would be no problem; you could deal with them. The problem is, they are inextricable. If you try to avoid life, you only end up avoiding death!

In ancient India, there were courtesans who were masters in the art of seduction. Their elaborate jewellery seemed impossible to remove for the men whom they plied endlessly with intoxicants. Actually, there was just one pin; all it took was to pull this one pin, and everything would fall down. That trick only the courtesan knew.

Life is a bit like that. It is a complex web, but there is one simple pin. And that is your identity. The play of five elements is highly evolved and complicated, but the key to freedom is your limited persona. If you pull yourself out, life’s complexity collapses and everything settles. The simplicity of perfect alignment with existence is suddenly yours.

Everything Is The Same, Yet So Different
How To Manage Expectations
Comment