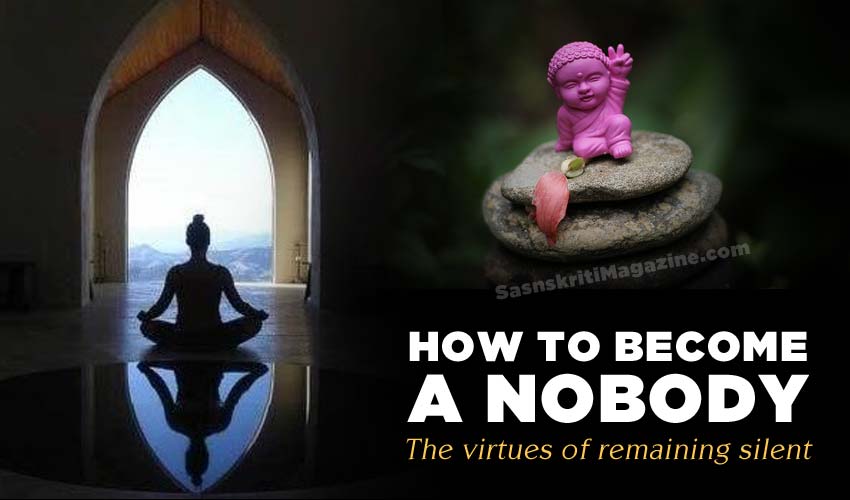 When the Buddha got enlightened on that full moon day in May, it is said that he maintained silence for the whole week. He didn’t say a word. Mythology says that all the angels in heaven were frightened. They knew that it was only once in a millennium that someone blossoms like the Buddha. Now he was silent!

The angels then requested him to say something. He said, “Those who know, they know even without me saying it and those who do not know, will not know even if I say it. Any description of light to a blind man is of no use. There is no point in talking to those who have not tasted the ambrosia of life, and, therefore, I am silent. How can you convey something so intimate and personal? Words cannot convey it. And, as many scriptures in the past have revealed, words end where truth begins.”

The angels said, “What you say is right. But consider those who are on the borderline, who are neither fully enlightened nor totally ignorant. For them, a few words will give a push; for their sake, you speak and every word of yours will create that silence.”

The purpose of words is to create silence. If words create more noise, then they have not reached their goal. The Buddha’s words would definitely create silence, because he is the manifestation of silence. Silence is the source of life and is the cure for diseases. When people are angry, they maintain silence. First they shout and then silence dawns. When one is sad, they ask to be left alone and retreat into silence. Silence is the recourse one takes to, if ashamed. If one is wise too, there’s silence.

Look at the noise in your mind. What is it about? Money, fame, recognition, fulfilment, relationships? The noise is about something; silence is about nothing. Silence is the basis; noise is the surface.

From the beginning, the Buddha lived a very satisfied life. Any pleasure was at his feet the moment he wanted it. One day he said, he would like to go and see what the world is. He set out in quest of truth, by himself, leaving his palace, wife and son. The stronger the silence, the more powerful will be the questions that arise from such a silence. Nothing could stop him. He knew he wouldn’t be able to get away during the day, so he escaped at night and his search continued for years. He did all that people told him to do; going to different places, fasting, walking many paths…. He discovered four truths.

He asked them to go and beg! He made kings take off their royal robes and take a bowl in their hand! Not that they were in need of food but he wanted to teach them the lesson of becoming ‘nobody’ from being ‘somebody’. You are nobody; you are insignificant in this Universe. When kings and geniuses were asked to beg, they became embodiments of compassion.

The first truth is, there is misery in the world. In life, there are only two possibilities: one is to observe the world around us and know from others’ sufferings, the second is to experience it and find that it is misery. The second truth is there is cause for misery. You can be happy without reason, but misery has a cause. The third is that it is possible to eliminate misery. The fourth is there is a path to be out of misery.

Turning the Page
Panchkosha: The 5 layers of a human being
Comment