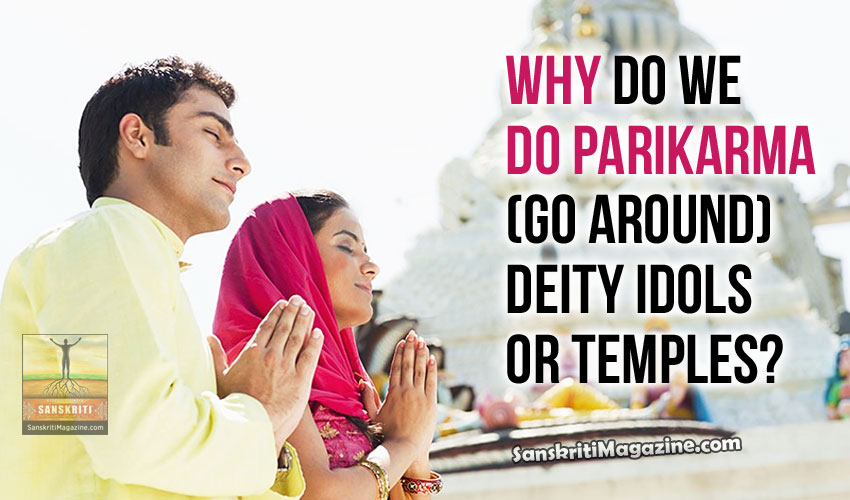 Pradakshina (Sanskrit), meaning circumambulation, consists of walking around in a ‘circle’ as a form of worship in Hindu ceremonies in India. The devotees walk around the garbha griha, the innermost chamber of the shrine housing the temple deity. It is done around sacred fire (Agni), trees and plants as well. Thus Pradakshina is done around Tulsi plant and Peepal tree. Pradakshina or Parikrama is done in pilgrimage centers also. Pradakshina literally means: to the right (Dakshina means right). So in Pradakshina, one goes to the left hand direction to keep the deity around the Sanctum Sanctorum on one’s right side. Pradakshina is one of the customary aspects of going to a temple.

Typically, Pradakshina is done after the completion of traditional worship (pooja) and after paying homage to the deity. Pradakshina is supposed to be done with a meditative mood.From the Rig Vedic verses Rig: 2.42.3 and 2.43.1 –” Pra as an adjective means very much. Pra can also come as a prefix to verbs and take on the meaning of onward, forward. Onward to Dakshinam or south is pradakshina . When one does that, one’s right side is facing the deity inside the garbhagraham and the circumambulation is Dakshinacharam or auspicous as recommended by the Veda. “Skanda Purana Ch.9 v.68 -In the word Pra-Da-Ksi-Na the syllable Pra dispels sin, the syllable Da bestows what is desired, the syllable Ksi causes the destruction of Karman and the syllable Na is the bestower of salvation.

Why is pradakshina done only in a clockwise manner?

Hindus go round the sanctum sanctorium in the temples and sometimes the deities in the pujas or yajnas at home in a clockwise direction..We always assume God is the center of our existence. He also exists everywhere. So when we do Pradakshina or circumambulation, we accept that our actions and thoughts are always centred around God. The center point is always fixed and remains the same at whatever distance we do the pradakshina. So we are reminded of the eternal truth that God is the center of gravity and the main focus of our existence.

This is the main principle of Pradakshinam.The world is always rotating around itself on its own axis as well as around the sun. All the planets also rotate on their own axes. This is called rotation and their rotation on their orbits is called revolution. Just like in solar system, the sun is at the center around which the planets rotate, our pradakshinams should be done with god at the center. The Pradakshinam should be done slowly and never in a hurry, Our thoughts and actions must dwell on God.It is normal to do Pradakshinam always in a clockwise direction. This is because we assume that Lord is always on our right side. This reminds that we must always lead a righteous life , in the right path called Dharma.

The sins committed by the mind are destroyed by the first step (of pradaksina), the sins committed in speech by the second and the sins perpetrated by the body by the third step… Accordingly the number of pradakshinas are one for Ganapathi, two for Soorya (Sun), three for Siva, four for Devi and Vishnu and seven for Arayaal (sacred fig), generally there padakshinas are done in a temple in Kerala. Accordingly the first padakshina destroys all sins including brahmahathya papa (sin due to slaying of Brahmins), the second makes the worshipper an adhikaari (qualified person for material and spiritual pursuits) and the third helps the person in obtaining naindra-sampaada (pleasures of life which lead to final liberation). A number of twenty one pradakshinas in a day is considered most beneficial as per Swayambhoo aagama.

Further he makes pradakshinas (devotional rounds) slowly with folded hands and visualizing the deity in his mind all the time. All these actions knowingly or unknowingly have salutary effect to ward off the ego from the mind of the devotee. It is noteworthy that the purpose of temple worship is never achieved unless one understands that visits to temples are temples are meant to help the devotee to shed his ego. The purpose of visits to temples is one’s own cultural emancipation which functions on functions on fundamental values known as dharma.

We cannot draw a circle without a center point. The Lord is the center, source and essence of our lives. We acknowledge this by performing Pradakshina. Recognizing Him as the focal point in our lives, we go about doing our daily chores. This is the significance of Pradakshina. Also every point on the circumference of a circle is equidistant from the centre. This means that wherever we may be or whoever we may be, we are equally close to the Lord. His grace flows towards us without partiality. According to Adi Sankaracharya, real Pradakshina is the meditation that thousands of universes are revolving around the Great Lord, the unmoving centre of all forms.

There is a popular legend about the significance of Pradakshina. Once Lord Shiva wanted his two sons, Ganesha and Subrahmanya, to get “worldly experience” and asked them take a “tour of the universe”. While Subrahmanya spent decades traveling the world on his peacock, Ganesha just walked a full circle around his mother and father and is believed to have explained “since the world is contained within you, I have already encircled the world”!