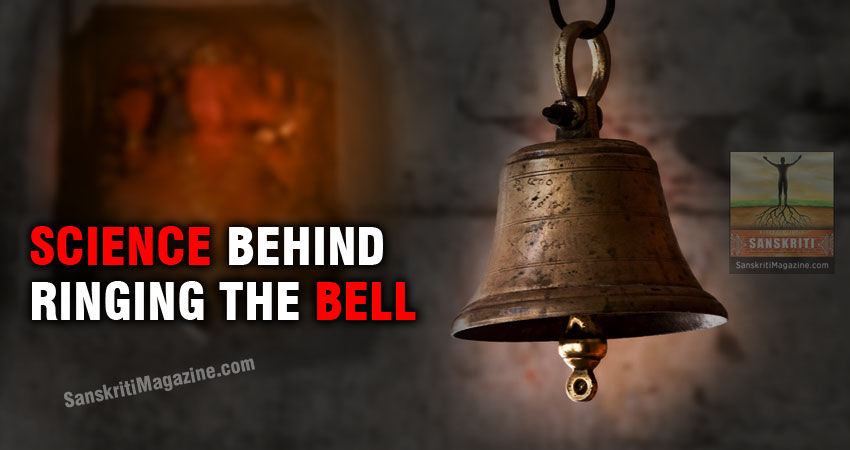 A Temple bell is another scientific phenomena; it is not just your ordinary metal. It is made of various metals including cadmium, lead, copper, zinc, nickel, chromium and manganese. The proportion at which each one of them mixed is real science behind a bell. Each of these bells is made to produce such a distinct sound that it can create unity of your left and right brain. The moment you ring that bell, bell produces sharp but lasting sound which lasts for minimum of seven seconds in echo mode good enough to touch your seven healing centers or chakras in your body.

The moment bell sound happens your brain is emptied of all thoughts. Invariably you will enter state of Trance state where you are very receptive. This Trance state is the one with awareness. You are so occupied in mind that only way to awaken you is with a Shock! And trust me Bell works as Anti-dote to your mind.

Before you enter temple – to awake you and prepare you for taste of awareness is the real reason behind temple bell. In other words “it helps to ring to wake yourself Up!” . To an extent Fragrant generators, Low light lamps all form Ecosystem to create awareness.

Bell or Ghanta is an indispensable part in most Hindu pujas. Ghanta is sounded before the actual puja and worship begins. A well-designed Ghanta or bell produce long strains of the sound ‘OM.’ A bell is rung in a Hindu temple, during the waving of light in front of the deity, while bathing the deity and while offering food. Hindu devotees on entering the temple also hit the ghanta hanged in front of the sanctum sanctorum.

The most widespread belief is that the ghanta is sounded to invite the deity to accept the worship and prayers. Another belief is that it is to drive away the evil forces.

The sound made from a well-designed Ghanta is uninterrupted, reverberating, deep and sonorous.

Even while doing the ritualistic aarati, we ring the bell. It is sometimes accompanied by the auspicious sounds of the conch and other musical instruments. An added significance of ringing the bell, conch and other instruments is that they help drown any inauspicious or irrelevant noises and comments that might disturb or distract the worshippers in their devotional ardour, concentration and inner peace.

As we start the daily ritualistic worship (pooja) we ring the bell, chanting:

Translation: I ring this bell indicating the invocation of divinity, So that virtuous and noble forces enter (my home and heart); and the demonic and evil forces from within and without, depart.