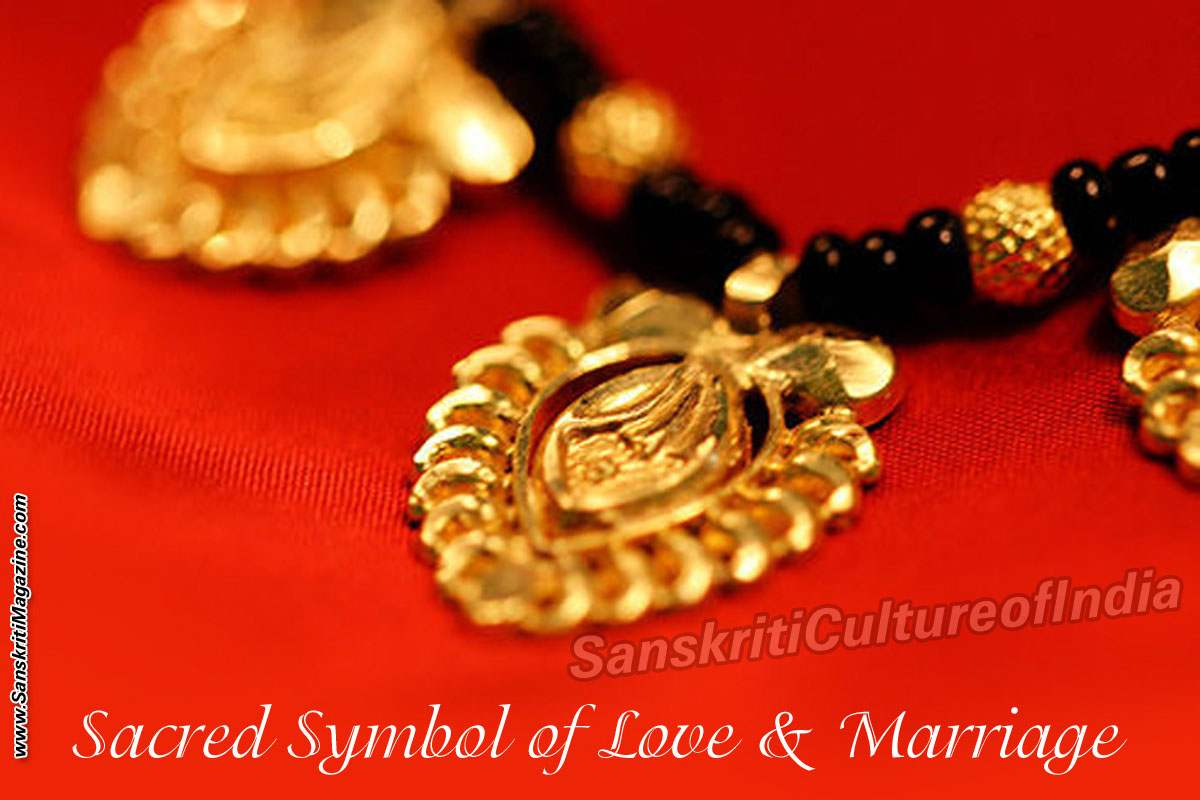 In Hinduism, when a girl gets married she adorns certain jewelry and observes special customs to make obvious her marital status. Just as a many of you wear the wedding ring after marriage, the married Hindu girl, according to the tradition, has to wear the ‘mangalsutra,’ bangles, nose and toe rings and a red bindi or apply ‘kumkum’ or vermilion on her forehead symbolizing not only her rite of passage from a girl to a married woman but also her heightened position in society as an adult who is respected and is capable of running a household, which is, in a way, the microcosm of the society at large.

The word ‘mangalsutra’ is derived from the two words, mangal meaning holy or auspicious and sutra meaning thread. It is a sacred necklace that the groom ties around the bride’s neck on the day of the wedding in a ceremony called Mangalya dharanam (meaning – wearing the auspicious), thereby giving her the status of his wife and life mate. Thereafter, the wife wears the mangalsutra all her life or till the time the husband is alive as a sign of their marriage, mutual love and goodwill, understanding and faithful commitment to one another.

When is the Mangalsutra Worn?

On the wedding day, a yellow thread is prepared by using turmeric paste and is tied around the bride’s neck with three knots during the marriage ceremony while the priest recites Vedic hymns and partakes in prayers. In some customs, the groom ties the first knot and his sisters tie the other two knots. Later, the mangalsutra may be restrung on some auspicious day in the form of a necklace made of gold and black beads strung together on one or two yellow threads or gold chains with an elaborate pendant of gold or diamond. In an arranged marriage, the design of mangalsutra is usually chosen by the groom’s family in keeping with their customs.

What does Mangalsutra Really Symbolize?

The mangalsutra, worn by most married Hindu women across India, is known differently in different parts of the country – ‘thaali’, ‘thaaly’, ‘pustelu’, ‘maangalyam’ or ‘mangalsutram’ in the southern states of India and ‘mangalsutra’ in the northern states. Each black bead in the mangalsutra is believed to have divine powers that protect the married couple from the evil eye and is believed to safeguard the life of the husband. Hindu women are extremely superstitious about the mangalsutra. If it breaks or gets lost it is considered ominous. Therefore, the Mangalsutra is much more than a piece of fancy jewelry, but a sacred necklace of love, trust and marital happiness of a Hindu couple – a vital symbol of wedlock.

Is Mangalsutra Fashionable for Modern Times?

With changing times and varying needs of women, especially in the metropolis, who are no longer stay-home wives, the concept of wearing a mangalsutra has changed visibly. Now, it is more of a fashion than a symbol of marriage. Rarely does a working woman don a mangalsutra over her trendy business suits. Also, there is a dramatic change in the style and make of the mangalsutra these days. Previously, women wore heavy and elaborate gold mangalsutras, but now, the trend is to wear short, sleek and single string ones with small designer diamond pendants. However, the black beads remain to ward off the evil and uphold the sanctity of the institution of marriage.

Myth of Throwing Coins in Water