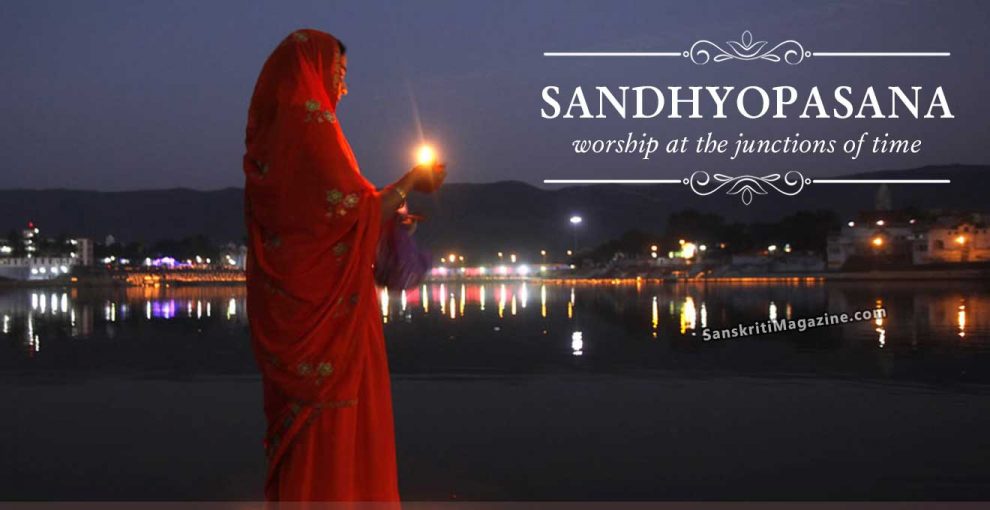 Sandhyopasana literally means ‘worship at the junctions of time.’ It is a prayer and worship offered to the Lord at the junction (Sandhi) of night and morning, forenoon and afternoon and at the junction of evening and night. The Arghya pradana to the sun and the meditation on and recitation of Gayatri, form the heart of the worship. Properly understood, the whole Sandhya is an earnest prayer addressed to the Lord to forgive all one’s sins committed during one’s routine, daily activities and to bestow illumination and grace.

Sandhyopasana must be performed at the proper Sandhyas. Then only the performer can derive much merit. There is a special manifestation of force at Sandhyas. This force disappears when the Sandhya is past.

Sandhyopasana is the daily religious practice of the Hindus whose investiture with the holy thread has been performed. Sandhya is a Nitya Karma or an action that is to be done daily. Sandhya is an obligatory duty to be performed daily for self-purification and self-improvement.

Sandhya should be performed by all followers of the Sanatana Dharma. Every Brahmachari and every householder must perform it every day. If he fails to perform it, there is Pratyavaya Dosha or the sin of omission. He loses his Brahma-Tejas.

According to the Hindu Sastras, a Brahmana, a Kshatriya and a Vaisya will get hell, if they do not perform three times Sandhyopasana (Traikalika Sandhya) daily. It is for the purpose of Sandhya only, the law of Yajnopavita-Samskara is laid down in the Yajnavalkya Smriti which says: “The Brahmana in his eighth year, the Kshatriya in his eleventh year and the Vaisya in his twelfth year are fit to be given Yajnopavita.” Because, only after this particular Samskara, they are supposed to be worthy to worship Sandhya and take to Vedic rites. They should keep themselves pure internally and externally. They can nicely understand the sacred glory of this divine science. 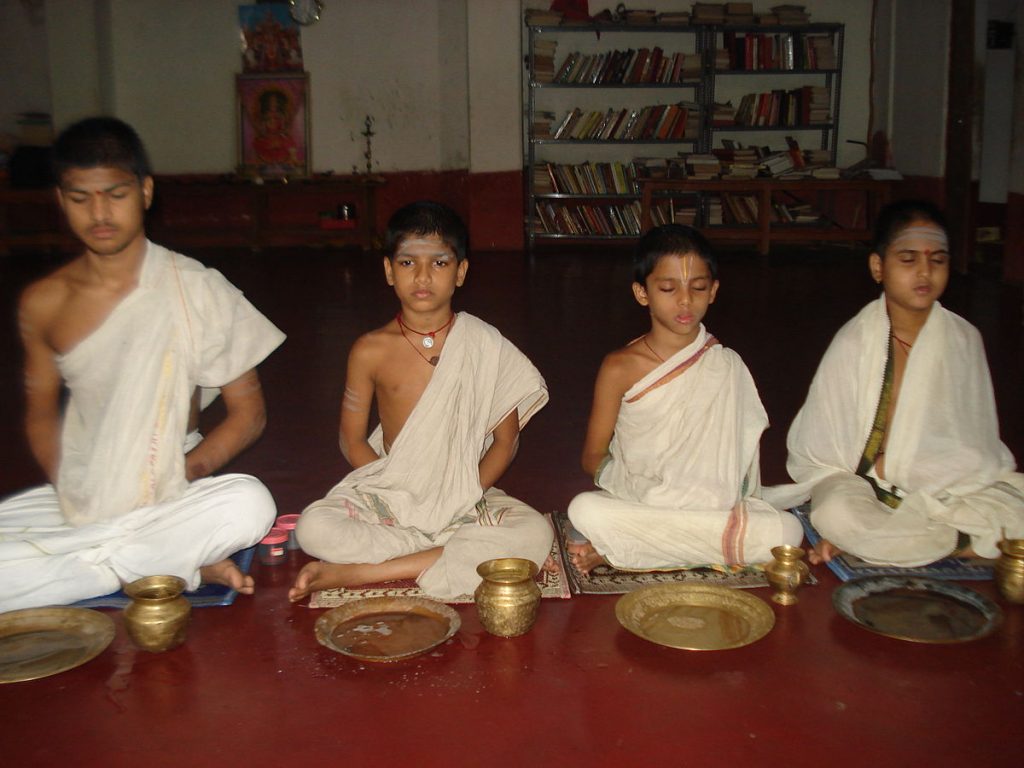 Sandhya is a combination of Japa, Upasana, Svadhyaya, meditation, concentration, Asana, Pranayama, etc. He who does Sandhya daily has Brahma-Tejas or spiritual lustre, in his face. A man who performs his daily Sandhya, according to the prescribed rules, at the appointed time as laid down in the scriptures, attains purity and success in his every effort. He becomes powerful as well as calm. Regular Sandhya cuts the chain of old Samskaras and changes everybody’s old situation entirely. It brings purity, Atma-Bhava, devotion and sincerity.

The important features of this ceremony are: (i) Achamana or sipping of water with recitation of Mantras (viz., Achyutaya Namah, Anantaya Namah, Govindaya Namah, etc.), Marjana or sprinkling of water on the body which purifies the mind and the body, Aghamarshana or expiation for the sins of many births, and Surya Arghya or oblations of water to the Sun-god, (ii) Pranayama or control of breath which steadies the wandering mind, and silent recitation of Gayatri, (iii) Upasthana or religious obeisance.

The first part up to Arghya consists of hymns addressed to water and its benefits. The sprinkling of water on the face and the head and the touching of the different organs (the mouth, nose, eyes, ears, chest, shoulders, head, etc.) with wetted fingers, are meant to purify those parts of the body and invoke the respective presiding deities on them. They also stimulate the nerve-centres and wake up the dormant powers of the body.

The second part of Sandhya consists of Pranayama and Japa of Gayatri.

The third part of Sandhya is the Suryopasthana. It is a prayer for forgiveness, mercy and grace. The prayer is: “Let me not go down to the earthly house. Have mercy, O Lord! My strength was very weak, O Lord! I did wrong actions. Have mercy, O Lord!” These are Vedic hymns addressed to the sun in the morning, noon and evening. The sun is the intellect in man. Ignorance is the night. Knowledge is the light. When you rise up from the darkness of ignorance, when the eye of intuition is opened through the grace of Gayatri, the Blessed Mother of the Vedas, you attain eternal bliss, supreme peace and immortality. It is that divine light which dispels delusion and the darkness of ignorance. It is that adorable splendour with which the world is glowing. It is that holy lustre which graciously fills the heart of a devotee with eternal bliss. It is this supreme Light which the aspirant craves from God through the Gayatri Mantra. He begs of God this Knowledge for his Realisation.

Man naturally wants to realise the Truth. He wants to know the secret of Creation. In this connection, scriptures emphatically declare: “Only at the moment when all doubts are cleared, ignorance is destroyed, hypocrisy and cruelty are rent asunder, and when a man sees Him in the abode of his heart, the real and ultimate Truth is revealed.”

Sandhya-Vijnana or the Science of Sandhya is an exact science to attain success in the realm of Truth. One need not have any kind of superstition to learn this divine science. One need not prove its greatness. Its greatness, its glory, is open truth. Even the materialistic society of today agrees with the truth of Sandhya-Vijnana. In the scriptures, it is laid: “Brahmanhood is the tree, Sandhya is its root, Vedas are its branches, religious acts are its leaves; therefore take care of its root, i.e., Sandhya.” Now the glory of Sandhya is very clear. Sandhya is absolutely necessary for a man who is treading the path of Truth. Aharahah Sandhyamupasita, i.e., a Brahmin should perform regularly his daily Sandhya at any cost—is the injunction of the scriptures.

Prerequisites For The Practice Of Sandhya

Food Diet
If you want to learn this science, you must be careful about your diet. Take regular and light Sattvic food. Man is much influenced by his diet. See the difference between a small lion and a big elephant. You will be able to improve yourself by adjusting your diet. Idleness is due to a variety of rich diet only. Therefore, be strict in your daily diet. You will be ever active and strong.

(Asana) Sitting Pose
A man who performs Sandhya does not care about his sitting pose. He sits in any posture. This is not much beneficial. He should daily sit in a perfect posture, Padmasana or Sukhasana, facing the particular direction. As far as possible, he must finish his Sandhya in one sitting. He must have perfect mastery over Asana. Then he will have concentration in his Sandhya.

Shradha (Faith and Devotion)
You must do your Sandhya with faith and devotion. Mere repetition will not bring much good. Pray from the core of your heart to the Lord to forgive your sins.

A Word To The Younger Generation
Our young college students, who are under the influence of wrong Samskaras and wrong education and evil company, have forgotten all about the glory and high efficacy of Sandhya. They are not doing Sandhya. Sandhya has no meaning for them. They have become Godless men. They want laboratory tests and scientific proofs for the usefulness of Sandhya, before they begin to do Sandhya. It must be supported by the statements of western scientists. The words of ancient Rishis do not appeal to them. What a greatly degraded state!

O young students! Do not ruin yourself by neglecting Sandhya. Regular performance of Sandhya will give you success in life and material and spiritual prosperity, good health and long life, purity of heart, and help you to attain God-realisation. Do it from now at least. Yet there is hope for you. Wake up. Be sincere.

Now take strict resolve from this very moment to be regular in your daily Sandhya, even under many distractions and obstacles. Begin it from this very moment. Do not delay. Reduce your useless activities. Talk little. Do not mix much. You will get plenty of time for your Sandhya.

Be strict in your Sandhya. Let there be rain or wind. Even if the Pralaya comes, do not leave it half-done. Many people say that they have not got time to perform Sandhya. They have to attend several functions. This is due to their weakness and lack of good Samskaras. They do not know the glory of this divine science. If they see one of their friends sitting on the banks of the river and performing Sandhya, they will begin to shout or they will play some sort of mischief. But these poor creatures do not know what secret is hidden behind the Sandhya. The Secret of secrets is hidden in this sacred performance. This is why ancient Rishis say: “One who does not perform daily Sandhya is a real animal.”

May God give you the mind to perform daily Sandhya at any cost. May you follow the rules of Sandhya. May you realise the glory of Sandhya-Vijnana and be free from all tribulations and torments. May the divine science named Sandhya-Vijnana bestow purity, immense joy and immortality on you!

The discourse above is an excerpt from All About Hinduism by Sri Swami Sivananda. The book meets the needs of those who want to be introduced to the various facets of the crystal that is Hinduism. The book, which was first published in 1947, has now been rearranged in a more convenient form, with useful additions here and there, and is now released in its fifth edition. .

Reason why Lord Hanuman is sometimes depicted as married?
Indicators Of Right And Wrong According to Hinduism
Comment