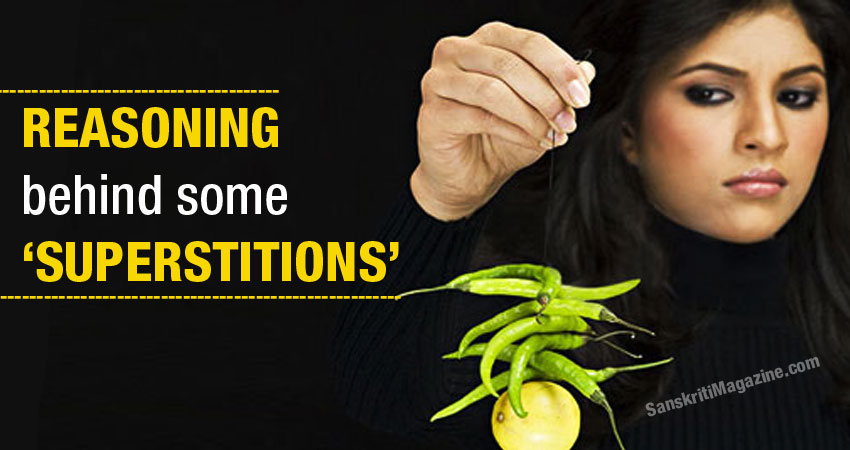 Please NOTE:  Simply because one may not believe in a particular belief, it doesn’t give them the right to mock or shoot it down.  Just like air or gravity that cannot be seen yet they play a vital part in our very existence, we as humans, are still on the learning curb of many yet uncharted territories in every aspect.

No matter what part of the world one turns to, there we will find certain native beliefs and superstitions which have been carried down from ages and India is certainly no exception.  Despite being one of the fastest progressive countries in the world, there are many people who are still superstitious and have strong faith in the local beliefs.

While many superstitions may be considered old fashioned or baseless, some of them once had deeper meaning and scientific reasons, most of the reasoning has been lost with the passage of time.  We take a look at some of these age old practices followed by our ancestors:

Believed to be a reincarnation of Goddess Lakshmi, Tulsi is considered to be holy and our ancestors believed the leaves should be swallowed and not chewed.

Science today tells us that the leaves contain a small amount of arsenic which, when chewed, reacts to the alkaline in our mouth and causes discoloration and tooth decay.

Click here to read about Why Hindus worship Tusli

Baby ritual to preserve a portion of the umbilical cord

Mānavadharmaāstra, an ancient text speaks of burying the umbilical cord in the fork of a sapling tree or storing it in a copper capsule.  This was believed to be a superstition which helped ground the child.

We now know that the human umbilical cord contains stem cells which have the remarkable potential to develop into many different cell types.  Perhaps our ancestors had some clue of a science that has been long lost.

Hanging lemon and seven green chillies outside home or business

We are unable to find a good reasoning behind this totka however the religious take on it is to ward of Jyestha or Alakshmi who is considered inauspicious.  A harbinger of misery and misfortune, she is believed to be the sister of Lakshmi, the Goddess of fortune and prosperity.

Alakshmi has a taste for sour and spicy things and for this reason people hang lemon and chillies outside their property so she can be satiated and not enter within.

Never sleep with your head to the North

Our ancestors probably knew about the relationship between Earth’s magnetism and our own body’s bio-magnetism.

If the head points north while sleeping, both these energies will repel each other and affect our health in a negative manner.

Avoid leaving the house during an eclipse

Fear of solar eclipses still exists today and many people around the world see them as evil omens that bring with them disasters and even death.

Observing the sun during a solar eclipse can damage to the eyes and cause retinal burns.  It is most likely why our ancestors refused to go out during this time.

With the lack of sun rays, the earth is just another place with harmful microbes and germs and it may be the reason why many people throw away food items prepared before the eclipse and do not eat food for the duration of the eclipse.

Applying Tilak or Bindi on forehead

The tilak or bindi is worn between the eyebrows where the pineal gland lies.  In the past, bindi was made from yellow and red sandalwood, red and yellow turmeric, saffron, various flowers, ash and zinc oxide.  All these have cooling properties by nature.

The Ajna Chakra is considered to be the place of the “Third Eye” where one applies the bindi or tilak.  It is where one finally loses Ahamkara / ego and achieves self-realization or higher level of spirituality.

Earlier, the traditional role of a woman in the house involved arduous and physically demanding tasks such as carrying heavy pots of water, grinding of wheat, daals, rice and masalas, farming duties and so on.  During periods women suffer in varying degrees from discomfort of cramps and headaches to PMS syndrome which includes depression, anger and mood swings.

They were prescribed rest during this time making them exempt from all household chores.  In fact, in orthodox homes in India, men – who otherwise would not lift a finger to help at home actually do the cooking!

Click here to read in details about Menstrual Taboo in Hinduism

Temple bells are made up of a mixture of various metals including cadmium, lead, copper, zinc, nickel, chromium and manganese.  The proportion at which each one of them is mixed produces a distinct sound that creates unity between the left and the right brain.

Each ringing lasts for about seven seconds that touch the seven chakras of the body, creating a positive vibration.  The moment the bell is rung, the brain is emptied of all thoughts and you go into a state of trance where you are very receptive.

Bathing after attending a funeral

Our ancestors lived with the laws of Nature and did not rely on medicines that we do today.  Vaccination against diseases was practically unheard of and the best way to stay healthy was to stay clean.

After death, a body starts decomposing and people who attend the funeral are exposed to bacteria responsible for the decomposition.  This is the reason rituals call for a bath immediately after the funeral before anything else is touched.

Always save one roti at the end of the meal

Many families continue to keep the last roti from their meal aside even today for they believe it ensures the family will never starve.

Our ancestors believed “athithi devo bhava” – guest is God.  Considering there were no telephone lines, emails or instant text messaging in the past, people would travel for miles to visit and would show up unannounced.  To have an empty kitchen where the guest would not be able to satisfy their hunger after a long journey, would surely be a nightmare for many.  For this reason, spare food was always kept aside for an unexpected arrival at the door and this could be anyone – from a human being to a cow or any other animal looking for food, for each and every living thing was simply a part of God.

Eating yogurt and sugar before leaving the house, especially on important tasks

Sometimes elders would make their children eat curd and sugar before they went out to do something important like an interview or an exam.

When the nerves are shod, the stomach can create some havoc on the body.  Yogurt is great for soothing upset stomach as it is full of active probiotic cultures which can get your digestion back on track.  It also soothes stomach woes as it is cool and coats the stomach lining.  The added sugar gives an extra energy boost and together both the ingredients create a calming effect on the body.

Indian meals are spicy and flavourful, with variations of spices that assist in not only making the meal tasty but also activate digestive enzymes and acids in the stomach to ensure proper absorption of food.   Some of these spices are the most powerful medicinal plants around.  Eating sweets at the end of a spicy meal settles the food and calms down the stomach lining.

Though they are ridiculed by many today, perhaps it is time we took a closer look at some of these taboos.  We may just find that the answers to many superstitions lie forgotten in the past.

The benefits of Maun Vrat