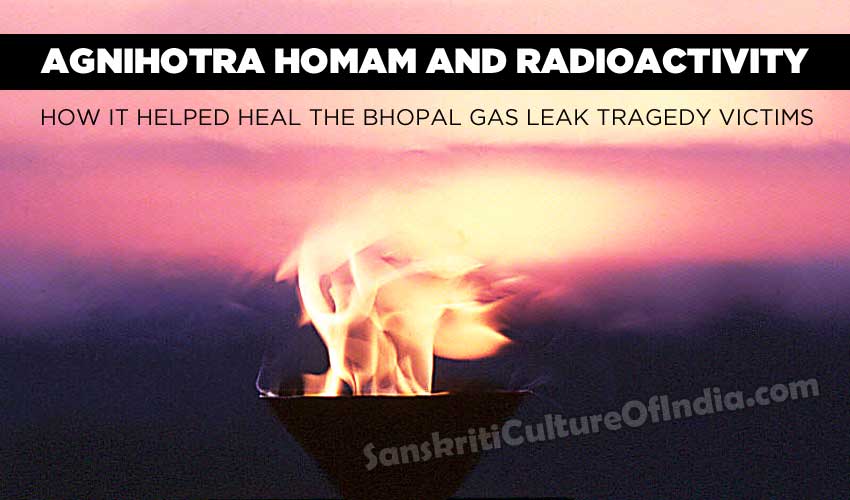 The city of Bhopal was gripped with fear and suffering.

On the night of December 2-3 1984, S.L. Kushwaha, a teacher woke up at 1.30am upon hearing his wife Triveni vomiting.  Soon after, he and his children also began coughing, having chest pain, suffocation and burning sensation in the eyes.  Looking outside, they saw chaos on the street where people were fleeing in panic.   Kushwaha was informed of the gas leak in the Union Carbide Factory and decided to join the crowd and run away from the affected area.  Triveni, however suggested, “Why not start doing Agnihotra?”   Kushwaha agreed and they started performing the Agnihotra, their symptoms of MIC gas poisoning disappearing within 20 minutes.

M.L. Rathore, with his wife, four children, mother and brother lives near the Bhopal Railway station, where dozens of people died of MIC poisoning. Rathore who had started doing Agnihotra five years ago, began doing the Homa, and continued with the “Tryambakam Homa.” 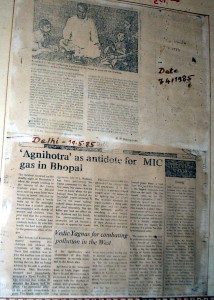 Realising the need of the hour, local Agnihotris promptly started welfare activities for the gas affected victims. Volunteer Agnihotris actively served in the MIC gas affected colonies forming 8 to 10 groups of Agnihotris at different places where about 40-50 affected people would gather. Morning-evening Agnihotra were performed amongst these affected people and small packets of Agnihotra ash was distributed to them for use as medicine. Similarly, every day after Agnihotra performance in the morning and evening Agnihotra, eye-drops were put in the eyes of the affected people. The result of the treatment with Agnihotra eye-drops was wonderful as it gave immense relief to the patients. In February 1985, Barry Rathner from US also came and worked for some time in the colonies of the affected people. Agnihotra was performed daily, morning and evening for the group of assembled suffering people for about 2 months. This inspired them to continue performing Agnihotra themselves.

The positive effects of Agnihotra benefited lots of gas affected people and among them the experience of the Prajapati family stands out as the most outstanding one. O.N. Prajapati’s wife was severely affected and was in critical condition. Prajapati himself suffered severe irritation and redness of the eye and his two sons were also badly affected. In such circumstances he started performing Agnihotra.

Prajapati was cured within a week’s time, his wife, however, took months to fully recover. One of his son, who was 13 years old, was diagnosed to be suffering from TB (Tuberculosis). Having experienced the results himself, Prajapati chose Agnihotra chikitsa (treatment) over normal medication to cure his son.  The most amazing part is that his youngest daughter, who was born one year after the gas tragedy, is the healthiest among his five children.

At the time of the Bhopal Gas Tragedy most of the Indian newspapers highlighted the wonderful curative effects of Agnihotra. A news report excerpt from ‘The Hindu’ published Sunday, April 7, 1985  is attached.

One Eastern European scientist said:
“Normally scientists will not understand easily how radioactivity can be neutralised by doing AGNIHOTRA. They always think of burning something as a chemical process only. But if it is only a chemical process then the nuclei of the atoms would not be changed. And therefore radioactivity could not be affected at all.

But in the last few years there were some articles on so-called ‘Cold Fusion’ where under quite normal conditions in laboratories, atoms were fused. Most scientists do not believe that this is possible. However, these reports were correct. In the Agnihotra process there is also something like cold fusion. This explains how radioactivity can be eliminated. The brainwaves of a person sitting near Agnihotra have an impact on the flame. If you measure the frequencies of the flame by some optical methods we could get something like EEG without even touching that person.”

After the Chernobyl nuclear accident, a meeting was held in Munich, between scientists of former Soviet Union and what was then West Germany. The presentation was made by Soviet scientists.

Some of the things discussed were as follows:
We have confirmed that the Agnihotra ash is the only absolutely pure substance which can work directly against radioactivity. It is working on a very simple principle. Our body is not able to recognize different elements like for example atoms of iron, and even less if they are radioactive or not. For example I eat an iron atom with my food and my body is not able to recognize it. When my body is filled with non-radioactive elements, then all that is coming in from any radioactive element will be thrown out; that is the principle of metabolism. Be it caesium, iron or any other element. We need caesium every day, iodine too, but when I take this same non-radioactive elements before, through the intake of Agnihotra ash, radioactive elements will not stay in the body; they come in and go out again! That means that from the Agnihotra ash we can make tablets and they act against radioactivity! Each scientist must say yes to this possibility!

But the cow dung, the ghee, the rice, all the substances used for Agnihotra process should not be radioactive. I know that in India and in Australia these substances are not polluted. We should start to produce Agnihotra ash tablets, either in India or in Europe, but with non-radioactive substances. This must be done in mass scale! I’m sorry to say that we shall start this as a “business”, but is for helping humanity! Chernobyl was very dangerous, but today it’s even more dangerous. Before the radioactive elements were in the air – now they are in the soil…. Europe is suffering! Children don’t have enough non-radioactive elements. Of course the TVs, newspapers and radios don’t speak about the real situation, but the scientists and experts know that it’s very dangerous. Every day becomes more and more difficult. Again I say that we must produce Agnihotra ash tablets!

When we take the product of a cow, what comes out has all the 92 elements! A cow is like a factory producing ghee and cowdung! Ghee has about 90% carbon. It is very rare, to find such an amount of carbon in any substance. The analysis of the Agnihotra ash will show if there is some radioactive carbon in the ghee. After the burning of the ghee it is not an organic material anymore. It becomes again a mineral substance. The mineral is again prepared to be returned to the earth. The burning process can take place by Agnihotra. The input and output weight are the same. Both cannot undergo any change. The atomic weight of the carbon is 6, and it does not change. You can burn it, you can feed a cow with it, or give it to a person, it always has the same weight. Here the scientists think in a different way. They think it is not the same if carbon is going through a man’s or a cow’s body, the weight remains the same, but within the carbon there are some subatomic particles. The physicist has found – beside protons, neutrons and electrons – about 2223 subatomic particles, but science does not know what to do with them. Why they are like that, nobody knows.

In physiological terms the body constantly exchanges all its elements (not cells). There are only some exceptions, like the lenses of the eyes and some parts of the nervous system. The mechanism of this exchange of elements in the body is not exactly known. For this exchange the body constantly needs elements like calcium, copper, iron etc. As long as these elements are not radioactive the body functions normally. Our body can deal well with the natural radioactivity which has been existing since millions of years on this planet. However, since the Chernobyl accident we are dealing with a much increased manmade radioactivity. Many radioactive elements like Caesium, Iodine, Iron, etc. have fallen onto this earth. The half-life period of these isotopes is rather high for some of them. They went from the air into the earth, from there into our food – salads vegetables, fruits. Through our food we absorb radioactive elements. This is because our body cannot distinguish whether an element is radioactive or not, and thus it absorbs the element without selection. Once a radioactive element is stored in the body it radiates all the time (like a lighthouse) and destroys the cells in its surroundings. The body reacts with an infection (with luck the radioactive element is thereby thrown out of the body) or it reacts by forming a tumor, a cancer.

Now where do we get these non-radioactive elements from in order to protect our body? The experiment that was conducted some time ago has shown that the Agnihotra ash (which at the time was produced by about 40 participants according to special directions of Dr Haber) was not radioactive, even though the ingredients were radioactive. (Till now we do not have an explanation of how this is possible – but the measurements of this effect were very clear.)

How this mechanism of changing radioactive elements into non-radioactive elements works we do not yet understand. It cannot be explained neither by modern chemistry nor by physics. But the result has been tested several times with always the same outcome: The Agnihotra ash just had natural radioactivity.

Also the Agnihotra ash contains all the 92 natural chemical elements. In this way the body’s total requirement can be covered. Therefore it is suggested to everybody to eat say a teaspoon of Agnihotra ash before every meal. Most important is in the morning. An easier way would be to make tablets from the ash which can easily be taken (as people are used to take tablets). Dr Haber stated that it will be necessary to produce big quantities of Agnihotra ash, he said: “in barrels”.

But also plants should get Agnihotra ash because they face the same problem of radioactivity.