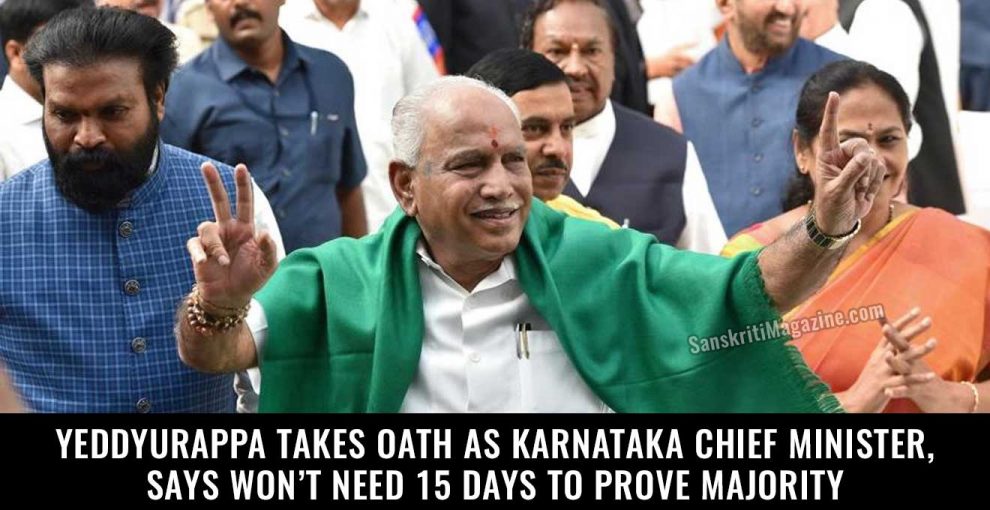 The Congress and JD(S) held a protest at the Vidhana Soudha, the state assembly. They condemned the governor’s decision to invite the BJP to form the government in Karnataka.

Bharatiya Janata Party (BJP) leader BS Yeddyurappa took oath as the 23rd chief minister of Karnataka at the Raj Bhavan in Bengaluru on Thursday morning, amid massive protests from the Congress and the Janata Dal (Secular) hours after the Supreme Court rejected their joint petition seeking a stay on the ceremony.

This is the third time that BSY, as he is popularly known, has taken over as the chief minister. In 2007, he ruled for seven days before the JD(S), which was the BJP’s coalition partner at the time, disagreed with the government over the sharing of ministries and withdrew support. In 2008, he again took over as the chief minister, but lasted only 39 months before he was arrested on corruption charges.

Wearing a green shawl that symbolises the farmers’ movement, Yeddyurappa took the oath in the name of god and farmers. Karnataka governor Vajubhai Vala administered the oath in the presence of senior state BJP leaders and Union ministers and amid heavy police security.

Yeddyurappa, 75, takes over as the CM after two days of uncertainty since votes were counted on May 15. The BJP emerged as the single-largest party in the state with 104 seats but fell short of reaching the halfway mark of 112 in the assembly. The Congress and the JD(S) joined hands in the hours that followed, and approached the governor with a request to let them form the next government in the state with HD Kumaraswamy as the CM. They also submitted a letter with the signatures of 116 legislators to Vala. 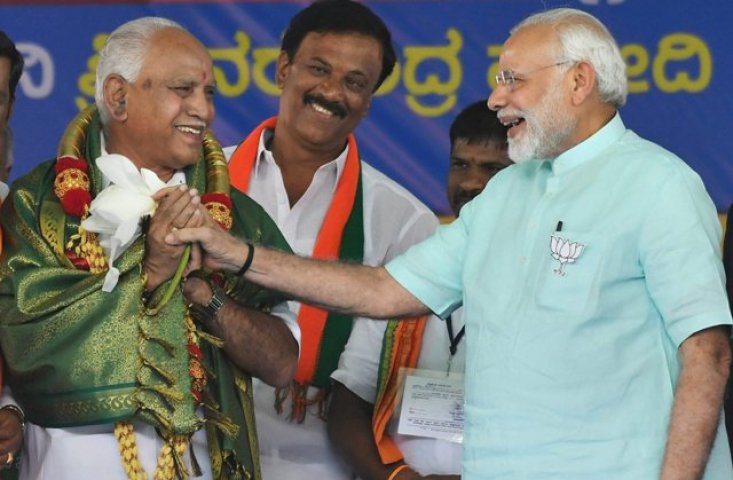 Yeddyurappa, too, staked claim shortly after.And on Wednesday night, Vala invited Yeddyurappa to form the government in the state, prompting the Congress to challenge the decision in the Supreme Court. While the apex court did not dismiss the petition, it permitted Yeddyurappa to take oath as the chief minister. It will hear the Congress’s plea at 10.30am on Friday. Vala has given Yeddyurappa 15 days to prove his majority on the floor of the house. Some analysts fear that the BJP will use this period to convince legislators of the Congress and the JD(S) to abstain from voting.

Addressing a press conference after being sworn in, Yeddyurappa said he would not take 15 days, but would prove his majority soon.

“We will prove our majority on the floor of the house as soon as possible. I appeal to the Congress and JD(S) MLAs to vote with their conscience,” he said. Calling the opposition alliance unholy, Yeddyurappa said the people of the state had voted against the parties. “It is only after the elections, in the lead up to which they attacked each other, that they have come together to form this unholy alliance,” he said.

Over the course of the day, the new CM indicated he would announce a farm loan waiver, changed the state’s chief secretary, made transfers in police and intelligence department, and appointed a new advocate general.

The Congress and JD(S) held a protest at the Vidhana Soudha, the state assembly. They condemned the governor’s decision to invite the BJP to form the government. “Earlier Vajubhai Vala had sacrificed his assembly seat in Gujarat for Modi and now he has sacrificed the constitution and democracy for Modi-ji,” the Congress’s chief spokesperson Randeep Singh Surjewala told reporters in Delhi, referring to how Vala had given up his assembly Rajkot seat in 2002 for then newly appointed CM Modi.

Surjewala called Yeddyuruppa a “one-day CM”. Congress president Rahul Gandhi also criticised the move, tweeting, “This morning, while the BJP celebrates its hollow victory, India will mourn the defeat of democracy.” BJP chief Amit Shah tweeted:?“The ‘Murder of Democracy’ happens the minute a desperate Congress made an ‘opportunist’ offer to the JD(S), not for Karnataka’s welfare but for their petty political gains. Shameful!”