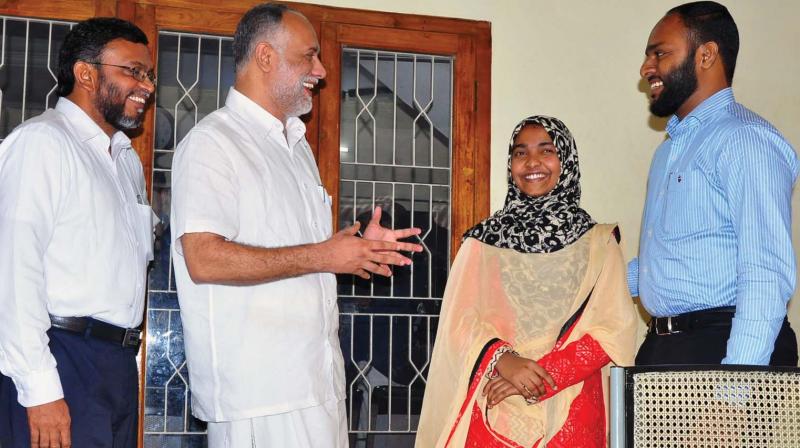 According to the statement released on Wednesday, the Popular Front of India (PFI) had paid Rs 93,85,000 as lawyer fees, including to the four seniors ones – Kapil Sibal, Dushyant Dave, Indira Jaising and Marzook Bafaki – who had appeared in SC for Hadiya’s husaband Shefin Jahan.

Thiruvananthapuram: The Kerala state committee of the Popular Front of India (PFI) has revealed the details of the amount it collected and spent on the legal battle for Hadiya, the 25-year-old woman whose marriage after conversion to Islam was first annulled by the high court and later restored by the Supreme Court.

In a statement released on Wednesday, the PFI said that it had spent a total of Rs 99,52,324 on fighting the case dubbed as the ‘love jihad case’ for Hadiya’s husaband Shefin Jahan for 10 months. The 27-year-old had challenged the Kerala High Court’s order of May 24, 2017, in the apex court and won the fight on March 8, 2018.

Naseeruddin Elamaram, head of PFI’s Kerala unit, said that the details have been released to answer the Muslim organisations that had criticised its role in the Hadiya case. “There were even allegations that we are trying to take advantage of the Hadiya case. It is others who should comment on our honesty, not ourselves,” he told News18.com.

According to the statement, PFI had paid Rs 93,85,000 as lawyer fees, including to the four seniors ones – Kapil Sibal, Dushyant Dave, Indira Jaising and Marzook Bafaki – who had appeared in SC for Jahan.

Sibal had appeared seven times in the case while Jaising and Dave appeared four and three times respectively. Bafaki had appeared only once. Noor Muhammed and Pallavi Prathap also appeared in the case on various occasions.

Apart from these senior lawyers, three more – Haris Beeran, KP Muhammad Sherrif and KC Nazeer – offered their services in the case free of cost. The PFI ALSO spent Rs Rs 5,17,324 as travel expenses and Rs 50,000 to the office of Haris Beeran for work related to documentation, said the statement.

“We have not done anything extraordinary on the accounts. PFI had made the accounts of its public collection in public earlier too, whether it was the Babri (Masjid) case, Madani (PDP leader Abdul Nasser Madani) case or Gujarat (riot),” Naseeruddin added.
Also Watch