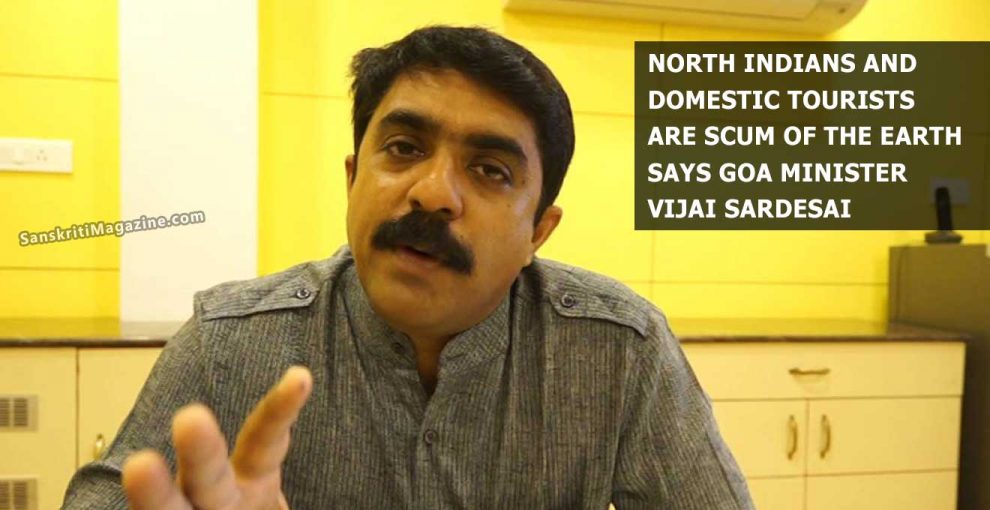 Sardesai said he preferred a model where the rich visit Goa as a tourist destination, to benefit the state’s poor. “The trick is to attract the rich tourist. That stayed with me. It has left an effect on me.”

Calling domestic tourists “scum of the earth”, Goa Town and Country Planning Minister Vijai Sardesai Friday cautioned against “North Indians” who he claimed wanted to “create a Haryana in Goa”.

Sardesai was speaking at the Goa BizFest in Bambolim. He also contradicted Chief Minister Manohar Parrikar’s target of one crore tourists and asked the government to attract foreign and upper-class Indian tourists. He is president of the Goa Forward Party which is part of the BJP government in Goa.

After listing the essentials for a smart city and garbage segregation, Sardesai veered off to the quality of tourists visiting Goa. His audience in Dr Shyama Prasad Mukherjee Stadium comprised a mix of heads from the tourism industry and industrialists in Goa.

Goa tourism minister Vijai Sardesai speaking at the Goa BizFest in Bambolim denounced domestic tourists and also resorted to hate politics. Goa BizFest is organized to share knowledge and ideas about businesses and provides a learning platform for startups. Vijai Sardesai who initially dwelled upon the subject of smart city changed tracks to discuss about the quality of tourists visiting Goa. Later, Vijai Sardesai quickly escalated it to hate politics when he categorically accused the North Indians of trying to create a Haryana in the state of Goa. He further remarked that the domestic tourists are the “scum of the earth“. His remarks came at the backdrop of his belief in attracting rich and foreign tourists which he said the state needs to focus and blamed domestic tourists for all the problems.

After quoting Parrikar’s push to increase tourists to Goa to one crore, Sardesai said: “Today we have almost six times population of Goa coming as tourists. Those tourists are not top-end tourists, they are also the scum of the earth. Are they responsible? They are not. If you compare Goans to rest of India, we are high in per capita income, social and political consciousness, we are much superior than people who are coming in. Those people, how you will control (them)? Can you control them?”

“We could control them at one point in time. But we jumped the Russians… We decided to put all eggs in one basket. The British have gone away. And, now we are dependent upon the north Indians and this is what they do. They are not bothered about Goa. They want to recreate Haryana in Goa,” said Sardesai. He then chose to connect “those states” as being “responsible for problems Goa has today”.

On its website Goa BizFest 2018 – “The space where Business meets business” , is described “as a festival organised so businesses from various sectors could join in an exchange the opportunities to explore, join hands and make the big leap. It’s planned in a way to hand hold startups, share knowledge about businesses and provide ample opportunities for bright careers to the best”.

Spread over three days, the Goa BizFest schedule includes speakers in programmes titled “business beyond boundaries”, “Goa as emerging Tech hub”. It is expected to end with a valedictory function with Srinivas Dempo, Chairman of the Dempo Group.

Sardesai told The Indian Express that his remarks were in reaction to a bureaucrat who referred to increased garbage because of tourism before his address. “Also, look those who come from Delhi, Haryana and Gurgaon, they have a tendency, they want to gobble everything. We In Goa have a certain way of living. Fifty years ago, we fought a battle and refused to merge with Maharashtra.” “Now we are fighting another kind of battle where these FSI people are coming and affecting our ethos. Why cannot they stay in hotels? They come and buy plots here and keep building,” he said.

While refusing comment on North Indians, Sardesai said he preferred a a model where the rich visit Goa as a tourist destination, to benefit the state’s poor. “It’s an idea I always have had. It all goes back to what Sir Vivian Richards told me at a tourism meet…He said, we can have the best beaches, best architecture, best beauty, but if we don’t have a golf course, it amounts to nothing,” he said.

“The trick is to attract the rich tourist. That stayed with me. It has left an effect on me. I want to think in those directions. Here too, among foreigners, we have Russian tourists, we have put all our eggs in one basket. World over, international tourists leave when Russians come. We all need to look at all of this and I think from a regional point of view, cause that is my ideology. We need to now think what kind of tourist we want to welcome?” Sardesai said.
In the past too, Sardesai has been vocal about his distaste for the domestic tourist, and had called for a change in the state’s tourism policy and making Goa expensive for the domestic tourist.

“Goa should become so expensive that tourists should say that it is not worth coming to Goa. Which tourists? The Indian tourists. We must have high-end facilities and get high-end tourism, which benefits the sons of the soil,” he had said at a public gathering in January without targeting any state or community.

At the Biz Fest Sardesai was more vocal as he said, “You have to orient the people correctly. Tell them brand Goa sells. People will keep coming. You need to get rich because of rich Indians coming here, and not due to poor Indians who is coming here and dirtying here,” he said.