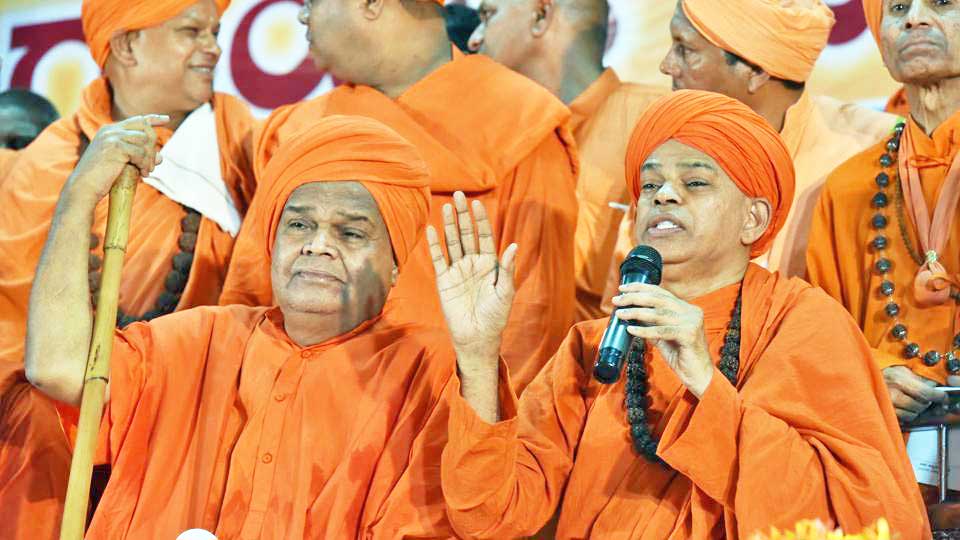 The Karnataka government’s move had divided opinion in the state, with the Lingayats coming out in support while the Bharatiya Janata Party (BJP) called it a gimmick by the CM with an eye on the May 12 polls.

Seers of the influential Lingayat maths (monasteries) on Saturday applauded the Karnataka government for recognising the sect as a religious minority. One seer even urged Lingayats to support chief minister Siddaramaiah in the assembly polls.

The Karnataka government notified the Lingayat sect as a religious minority in the state last month, and forwarded an expert committee report on the subject to the Centre, asking it to take a final call.

The move divided opinion in the state, with the Lingayats coming out in support, while the Bharatiya Janata Party (BJP) called it a gimmick by the CM with an eye on the May 12 polls.

“Thanks to Siddaramaiah, Lingayats have got the separate religion status,” said Mate Mahadevi, seer of the Basava Dharma Peetha in Bagalkot district. Speaking at a meeting of the Forum of Lingayat Mathadipathies (pontiffs) in Bengaluru, she added, “Siddaramaiah did not raise this issue, we brought it up. But within 10 months, he has delivered on our demands.”

The seer said, “We must support him, we must not hide. He could have kept the file pending, but he brought in the notification before the model code of conduct could come into force.”

She urged Prime Minister Narendra Modi to “gift” Lingayats separate religion status on April 18, the birth anniversary of Basavanna (the 12th century philosopher who is credited with having formed the sect).

Shivamurthy Murugha Sharanaru, pontiff of the Murugha Math, too backed the state government’s move, but declined to comment on political support for the ruling Congress.

“The state government has supported us completely and now we will agitate till the central government grants us the same status. We will support those who supported us,” he said.

Asked if the seers had decided to support the Congress, he replied, “Not everything can be said openly.”

The seers at the meet criticised BJP president Amit Shah’s remarks last week that he would not let the community be divided for political reasons. Reading a note issued by the pontiffs, Jaya Mrutyunjaya Swamy of the Koodalasangama Math said, “Who is Amit Shah to make such statements? Is he the president? With what authority has he made such irresponsible statements? We condemn this.”

BJP spokespersons in Karnataka declined to comment on the stand taken by the seers at the meet. Lingayats, believed to be about 15% of the state’s population, were long considered a BJP support base, more so for the party’s chief ministerial candidate, BS Yeddyurappa, who is a Lingayat.