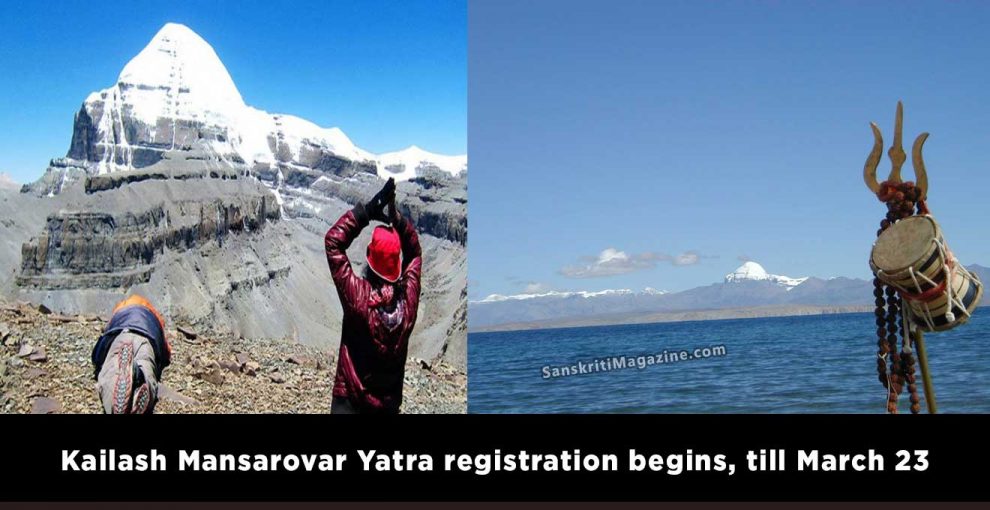 The Kailash Mansarovar Yatra will this year take place through the two traditional routes — Nathua La Pass in Sikkim and Lipulekh Pass in Uttarakhand — and the registration process for the annual pilgrimage has started, the External Affairs Ministry announced on Wednesday.

New Delhi: The Kailash Mansarovar Yatra will this year take place through the two traditional routes — Nathua La Pass in Sikkim and Lipulekh Pass in Uttarakhand — and the registration process for the annual pilgrimage has started, the External Affairs Ministry announced on Wednesday.

The announcement comes after China said it would allow the Nathu La Pass to be used after having blocked the route last year in the wake of the Doklam stand-off.

In a statement, the External Affairs Ministry said that the registration process started on February 20 and will close on March 23.

The Yatra will be held from June 8 to September 8 this year and applicants should be at least 18 years and not more than 70 years as of January 1, 2018.

Mount Kailash, in the Tibet Autonomous Region of China, is considered the abode of Lord Shiva and is sacred to Hindus. Located near lake Mansarovar, the place is considered holy by Jains and Buddhists as well.

Earlier this month, Minister of State for External Affairs V.K. Singh informed the Lok Sabha that the Kailash Mansarovar Yatra via the Nathu La route was not undertaken in 2017, after the Chinese government cited unfavourable conditions to ensure the safe and smooth conduct of the pilgrimage on this route.

The resumption of the annual pilgrimage through Nathu La was raised by India during meetings between the two sides last year, he said.

China did not allow Indian pilgrims to travel to Kailash Mansarovar through Nathu La after the face-off between the Indian and Chinese militaries on the Doklam plateau in Bhutan. The pilgrims opting to undertake the pilgrimage through Lipulekh Pass in Uttarakhand were allowed.

According to Wednesday`s ministry statement, the route through Lipulekh Pass which involves some trekking, is estimated to cost about Rs 1.6 lakh per person and the pilgrimage will be conducted in 18 batches of 60 pilgrims each.

The duration of the Yatra is 24 days for each batch, including three days in Delhi for preparatory work.

“This route passes through important sites like Narayan Ashram, Patal Bhuvaneshwar, etc. Yatris can also see the scenic beauty of Chialekh Valley, or the Om Parvat which has the natural occurrence of snow in the shape of `Om` on this mountain,” the statement said.

The route through Nathu La Pass is motorable and suitable for senior citizens unable to undertake arduous trekking.

Using this route will cost about Rs 2 lakh per person and duration of the Yatra is 21 days, including three days in Delhi for preparatory work. This year 10 batches of 50 pilgrims each are scheduled for this route.”

“From Gangtok the route passes through scenic places like Hangu lake, and through the vast landscape of the Tibetan plateau,” the statement said.

As in previous years, first-time applicants, medical doctors, and married couples would have priority for this year`s Yatra.

“Senior citizens would have priority on the Nathu La route if they opt for it. Two persons may apply and undertake the Yatra together, subject to conditions,” the ministry said. “Yatris can select both routes indicating priority or select only one of the routes. They will be allotted a route and batch through computerised draw of lots.”

Registration for the Yatra can be done on the website www.kmy.gov.in and applicants have to scan and upload passport pages containing personal details, address details, and a photo to complete the application.

Selection of applicants will be through a fair computer-generated, random, gender-balanced selection process.