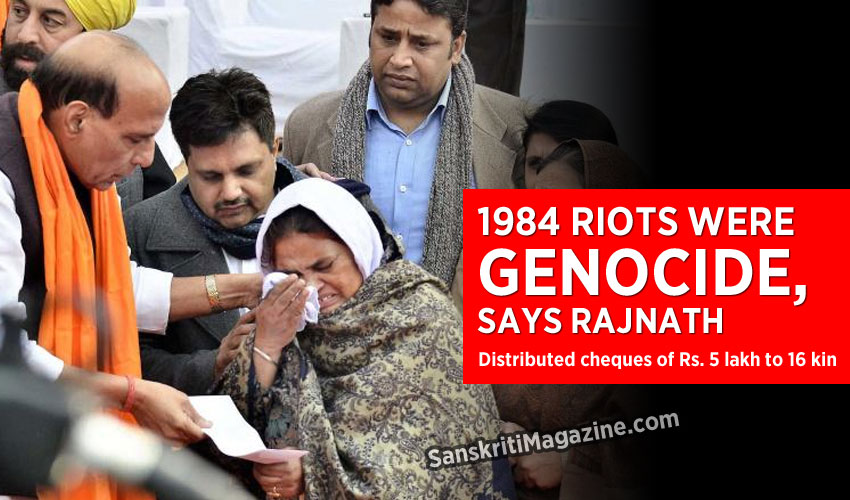 In picture above : Bhupinder Kaur, one of the 1984 riot survivor, gets emotional after receiving a cheque from Union Home Minister Rajnath Singh on Friday.Photo: Shiv Kumar Pushpakar
[hr]
Terming the 1984 Sikh riots as ‘genocide’, Union Home Minister Rajnath Singh on Friday said he has full faith in the Indian judiciary and “justice would be meted out to the victims only when the perpetrators of the crime are punished”.

“The occasion does not call for a long political speech, but there are several persons who are yet to be punished. I have faith in our judicial system. I know that until these persons are punished, victims will not get relief. I want to assure that the government is with you,” Rajnath said after distributing cheques of enhanced compensation to the riot victims in Tilak Vihar – a resettlement colony of 1984 riot victims – in west Delhi.

The Union minister distributed cheques of Rs. 5 lakh to 16 kin of the riot victims at a function here. Delhi government officials said, enhanced compensation to 2,459 people will soon be given after a verification. The organisers said they were earlier planning to distribute cheques to 40 families, but it was given only to 16 “as per the availability of the family members”.

Mr. Singh also informed the gathering that he has constituted a committee under a retired judge to look into the grievances of victims of 1984 riots. “Ever since I took over, I have been receiving complaints of lack in facilities for the victims besides complaints of laxity in the inquiry. I want the victims to register their complaints with the committee which would become functional soon,” said Mr. Singh.

While all the speakers at the function, held in a small park surrounded by dilapidated DDA flats allotted to the victims, emphasised that the function was organised merely to ‘share the pain of the victims’, attendance of a battery of Bharatiya Janata Party leaders, both national and local, the ‘political nature’ of the event, organised just ahead of the Assembly polls, was apparent.

However, even those who received the compensation said, the best way forward to forget their pain would be if the government settles their issues once and for all. “Such functions force us to live those unforgettable moments. We have been bearing it for the past 30 years. Its better such functions are not held and all the issues are settled in one go. Only then we can move ahead,” said Ajeet Singh, son of Dalip Singh who died during the riots.

Besides Mr. Singh, Mr. Verma and Mr. Upadhyay addressed the gathering, besides Lieutenant Governor Najeeb Jung. While Mr. Verma asserted than none less than capital punishment would bring closure for the victims, he also promised the residents of Tilak Vihar that a decision on their demand to waive off power bills would be taken by the year-end.