A human skeleton found at the Rakhigarhi site. (pic via Twitter) 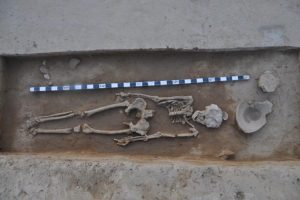 The much-awaited DNA study of the skeletal remains found at the Harappan site of Rakhigarhi, Haryana, shows no Central Asian trace, indicating the Aryan invasion theory was flawed and Vedic evolution was through indigenous people.

According to archaeologist Vasant Shinde of the Deccan College, Pune and Neeraj Rai the head of the ancient DNA laboratory at Lucknow’s Birbal Sahni Institute of Palaeosciences (BSIP), the DNA extracted from Rakhigarhi sites, reveal no ‘Central Asian/Steppe element in the genetic make-up’ of the Harappans.

“The Rakhigarhi human DNA clearly shows a predominant local element — the mitochondrial DNA is very strong in it. There is some minor foreign element which shows some mixing up with a foreign population, but the DNA is clearly local,” Shinde told ET. He went on to add: “This indicates quite clearly, through archeological data, that the Vedic era that followed was a fully indigenous period with some external contact.”

According to the findings, the manner of burial is quite similar to the early Vedic period, also known as the Rigvedic Era. The pottery, the brick type used for construction and the general ‘good health’ of the people ascertained through the skeletal remains in Rakhigarhi, he said, pointed to a well-developed knowledge system that evolved further into the Vedic era.

The continuity of culture from Harappan to post-Harappan period, which these authors consider as Vedic, clearly suggests that there were no major population intervention from outside.

According to this report, the evidence points to a predominantly indigenous culture that voluntarily spread across other areas, not displaced or overrun by an Aryan invasion.