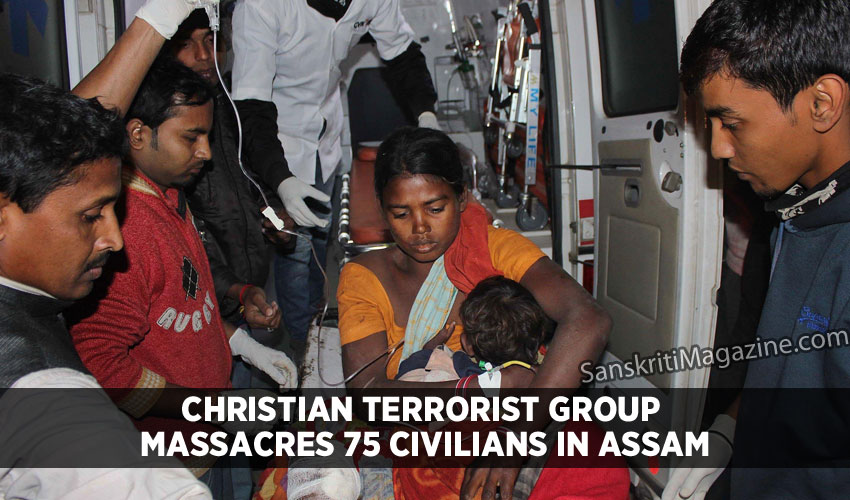 In a massive assault on the tribal civilians in the state of Assam, the Songbijit faction of the National Democratic Front of Bodoland (NDFB) has massacred around 75 civilians as confirmed so far. The toll is likely to increase further as time passes.

In Shonitpur near the Assam-Arunachal Pradesh border the NDFB terrorists gunned down 27 civilians mostly women and children. A witness who survived the attack as she hid herself in a dumping zone said, “The terrorists clad in camouflage uniform encircled the village and asked the people to come out of their houses, lined them up and shot them down with their assault rifles. The children were shot in a special line in front of their mothers as they helplessly watched the horrendous scene and tried to struggle to rescue their children.”

There is a difference in opinion about the usage of “army uniform” in this incident. The terrorists’ intention might be to launch a false flag operation as the Lashkar-e-Taiba did in Chhattisangpura in Kashmir while killing 40 Sikhs to put blame on Indian Army. However this might not be the case because the terrorist groups in North East have their own military uniforms and that’s what they might have worn. One more speculation regarding this uniform is that they might have adopted this uniform to cheat the check posts.

The NDFB(S) unit carried out similar massacre in Dhekiajhuli and Kokarjhad too in the Assam-Bangladesh border and massacred around 56 civilians and more than a hundred people are seriously injured. Assam’s CM Tarun Gogoi has condemned the attack as “barbaric” and “horrendous” and asked 6 of his cabinet ministers to rush to the spots on emergency basis. Indian Prime Minister Narendra Modi too has condemned the attack.

Prime Minister Narendra Modi condemned the killing of innocent people as an act of cowardice. “Our thoughts and prayers are with the families of the deceased,” he tweeted. Mr. Modi said he spoke to Mr. Gogoi and Mr. Rajnath Singh. “Mr. Rajnath will travel to Assam and take stock of the situation,” he said.

Army has been called in by the Assam Government. Rajnath Singh has tweeted that the paramilitary forces has already been dispatched to the terror hit areas and other areas with similar probability. He assured any assistance the state needs from center. Manas National Park and one more park has been shut down at the wake of this terror attack as they are popular tourist spots for non-Bodos and inhabited by tribal people, both of whom are the targets of the NDFB terrorists.

The tribal people were on the target of the NDFB(S) since the moment they started praising the RSS and tried to come into the Hindu fold. The Hindu nationalists were gaining hold on the North-East and a few days back the tribal children were seen praying under saffron flag. The NDFB(S) and other Christian organizations issued warning against them not to participate in such Hindu programs.

NDFB(S) is a Christian terrorist organization which sabotaged the actual Bodoand movement that saw Bodoland is a territory for the ethnic Bodos who claim themselves different from the Assamese but later the Evangelists infiltrated the organization sameway they did in LTTE and Naga organizations and it became a separatist organization walking on the path of terror tactics.

NDFB has history of communal attacks on Hindus including the tribal people who didn’t agree to convert into Christianity. In the past, the NDFB received its funding via the Bhutanese diplomatic bag to their leadership based in the capitals of South-East Asian countries. The Myanmar-based Chin National Liberation Army is NDFB’s main supplier of arms and ammunition. The outfit also has had links with other militant organizations including United Liberation Front of Assam (ULFA), Kamatapur Liberation Organization (KLO), Achik National Volunteers Council (ANVC) and National Socialist Council of Nagaland-Khaplang (NSCN-K) which officially declared Nagaland as the “Kingdom of Christ”. The Hindu Bodos irritated by the activities of NDFB had formed a pro-India resistance group named “Bodo Liberation Tiger Force” (BTLF) which has assisted the Indian security agencies in their operations against NDFB.