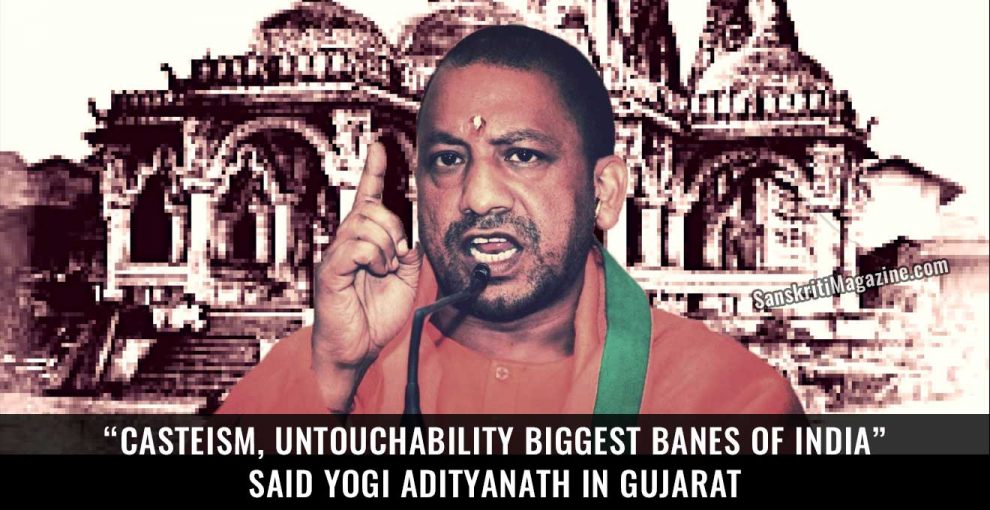 Yogi Adityanath referred to his BJP government in Uttar Pradesh and said that unlike other governments, BJP governments always try to bring development on the lines of ‘Sab ka Sath, Sabka Vikas.’

Chief Minister of Uttar Pradesh Yogi Adityanath, on Sunday, called casteism and untouchability as the two biggest banes of India and called upon the religious saints to eliminate the same from the society.The UP CM was in Visnagar of Mehsana district on the occasion of a Bhandara Mahotsav (community kitchen) following death of a religious guru of Nath Sampraday here – Sant Gulabnath. Adityanath also belongs to the sect and is ‘Gurubhai (disciple of same mentor)’ of Gulabnath who came from a Muslim family before adopting ‘sanyas (renouncing the world).’

The UP CM asked the religious leaders to take the lead in spreading the message of brotherhood and unity among the people of India while adding that untouchability can never be part of Indian culture and if it does then people should be ready for Somnath like attacks. He added that many elements who want to weaken India, they always try to bring such divisions in our society.

In his around 40-minutes speech, Adityanath also hailed Prime Minister Narendra Modi for laying foundation stone of a temple in ‘fundamentalist’ Saudi Arabia.

Yogi Adityanath also referred to his BJP government in Uttar Pradesh and added that unlike other governments, BJP governments always try to bring development on the lines of ‘Sab ka Sath, Sabka Vikas.’

Adityanath gave an example of Uttar Pradesh and said, “What used to be the situation in Uttar Pradesh before 2017? Two big communal riots were reported every week. And in riots, religious leaders and their followers were insulted…and when you go to lodge a complaint, you would be put behind bars. Today, Uttar Pradesh is not witnessing riots. Today, nobody can do riot…”