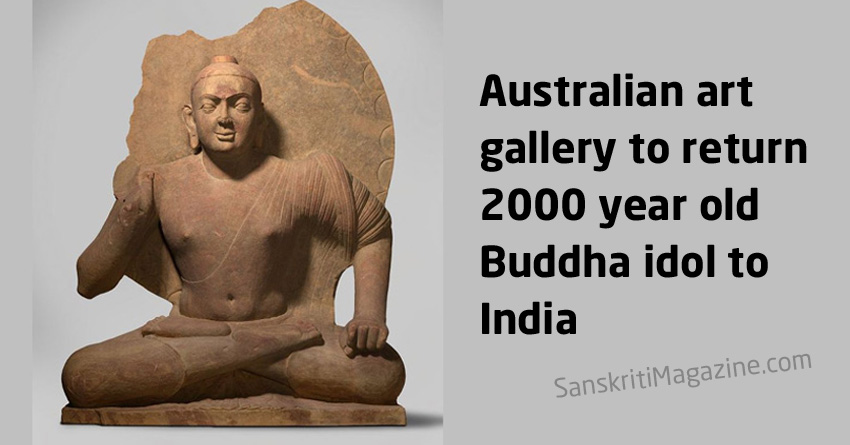 With the Canberra-based art gallery giving its consent, the ASI has requested the Ministry of Culture to send an official team to examine the antique idol dating to the first century.

Close on the heels of Germany returning an ancient Durga idol, an Australian art gallery has agreed to give a 2,000-year-old Buddha sculpture back to India.

The Sitting Buddha sculpture, whose roots could be traced to Mathura in Uttar Pradesh, is currently with a national art gallery in Canberra, Australia, Archaeological Survey of India (ASI) officials here said.

“Last week, the Australian art gallery intimated the Union Culture Ministry that they intend to return it. The sculpture made of sandstone is an image, which is very unique to the Mathura region,” ASI sources said.

With the Canberra-based art gallery giving its consent, the ASI has requested the Ministry of Culture to send an official team to examine the antique idol dating to the first century.

“Now, the gallery has agreed to return the sculpture. It is necessary for us to authenticate the sculpture,” they said, adding it is part of the process involved in retrieving the object.

Asked whether any case regarding the missing of thesculpture has been registered in India, sources said there was no complaint available with the police “as of now”.

However, ASI sources said, the design employed in crafting the sculpture is quintessentially associated with Mathura, an important Buddhist centre several hundred years ago.

Besides, they said, a state archaeological museum in Uttar Pradesh has similar Buddha statues, indicating towards the sculpture’s Mathura links.

ASI sources also suspect the role of notorious Indian art dealer Subhash Kapoor in smuggling the sculpture out of the country.

During his visit to India last year, the then Australian Prime Minister Tony Abbott had handed over to his Indian counterpart Narendra Modi two antique statues of Hindu deities which had been stolen from temples in Tamil Nadu before being bought by art galleries in Australia.

Abbott returned the idols, one of which was a Nataraja –the dancing Shiva– belonging to the Chola period 11th-12th century. The other was Ardhanariswara dating to 10th century. Ardhnariswara, the androgynous form of Shiva and his consort Parvati, is depicted as half male and half female, split down the middle.

The Nataraja statue, cast in bronze, was purchased by the National Gallery of Australia (NGA) in February 2008 from Subhash Kapoor who was then based in New York.

In 2012, Kapoor, owner of the “Art of the Past” gallery in New York, was arrested in Germany and subsequently extradited to India. He has been accused of conspiracy to commit burglary and smuggling from Tamil Nadu of antique idols of Hindu deities belonging to Chola dynasty.

German Chancellor Angela Merkel had on October 6 handed over to Prime Minister Narendra Modi a 10th century Durga idol which had gone missing from a temple in Kashmir over two decades back and was later found in a museum in that country.