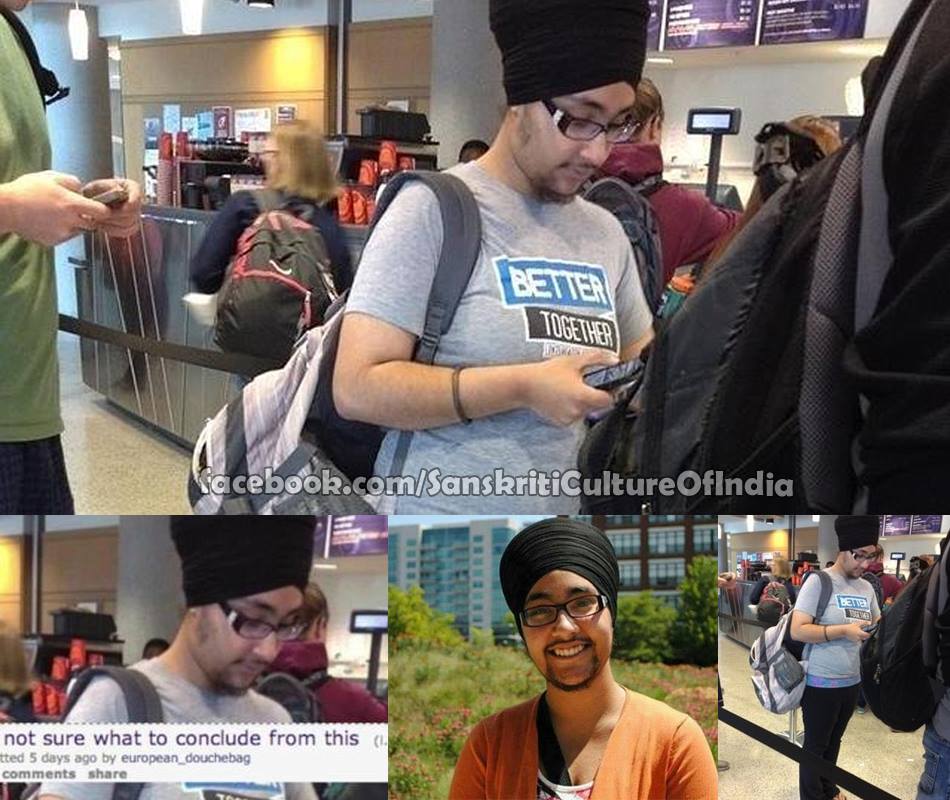 A Reddit user going by the handle “european_douchebag” posted a surreptitious photo of a Sikh woman with the caption “i’m not sure what to conclude from this.” The user’s apparent confusion stems from the fact that the woman—bound by her religion not to cut her hair or alter her body—has an abundance of dark, untrimmed facial hair.

The mind of european_douchebag was SO INCREDIBLY BLOWN by the fact that women have hair on their bodies—and, yes, faces—and that some women are bold, self-assured, and pious enough not to cave to western beauty standards (and gender expectations), there was nothing for him to do but post her photo online and wait for the abuse to flood in.

But then something totally lovely and unexpected happened. The woman in the photo responded:

Hey, guys. This is Balpreet Kaur, the girl from the picture. I actually didn’t know about this until one of my friends told on facebook. If the OP wanted a picture, they could have just asked and I could have smiled However, I’m not embarrased or even humiliated by the attention [negative and positve] that this picture is getting because, it’s who I am. Yes, I’m a baptized Sikh woman with facial hair.

Yes, I realize that my gender is often confused and I look different than most women. However, baptized Sikhs believe in the sacredness of this body – it is a gift that has been given to us by the Divine Being [which is genderless, actually] and, must keep it intact as a submission to the divine will. Just as a child doesn’t reject the gift of his/her parents, Sikhs do not reject the body that has been given to us. By crying ‘mine, mine’ and changing this body-tool, we are essentially living in ego and creating a seperateness between ourselves and the divinity within us. By transcending societal views of beauty, I believe that I can focus more on my actions.

My attitude and thoughts and actions have more value in them than my body because I recognize that this body is just going to become ash in the end, so why fuss about it? When I die, no one is going to remember what I looked like, heck, my kids will forget my voice, and slowly, all physical memory will fade away. However, my impact and legacy will remain: and, by not focusing on the physical beauty, I have time to cultivate those inner virtues and hopefully, focus my life on creating change and progress for this world in any way I can. So, to me, my face isn’t important but the smile and the happiness that lie behind the face are.

So, if anyone sees me at OSU, please come up and say hello. I appreciate all of the comments here, both positive and less positive because I’ve gotten a better understanding of myself and others from this. Also, the yoga pants are quite comfortable and the Better Together tshirt is actually from Interfaith Youth Core, an organization that focuses on storytelling and engagement between different faiths.

I hope this explains everything a bit more, and I apologize for causing such confusion and uttering anything that hurt anyone.

And then, THEN, something even more miraculous happened—the original poster apologized:

I know that this post ISN’T a funny post but I felt the need to apologize to the Sikhs, Balpreet, and anyone else I offended when I posted that picture. Put simply it was stupid. Making fun of people is funny to some but incredibly degrading to the people you’re making fun of. It was an incredibly rude, judgmental, and ignorant thing to post.

/r/Funny wasn’t the proper place to post this. Maybe /r/racism or /r/douchebagsofreddit or /r/intolerance would have been more appropriate. Reddit shouldn’t be about putting people down, but a group of people sending cool, interesting, or funny things. Reddit’s been in the news alot lately about a lot of cool things we’ve done, like a freaking AMA by the president. I’m sorry for being the part of reddit that is intolerant and douchebaggy. This isn’t 4chan, or 9gag, or some other stupid website where people post things like I did. It’s fucking reddit. Where some pretty amazing stuff has happened.
I’ve read more about the Sikh faith and it was actually really interesting. It makes a whole lot of sense to work on having a legacy and not worrying about what you look like. I made that post for stupid internet points and I was ignorant.

So reddit I’m sorry for being an asshole and for giving you negative publicity.

Balpreet, I’m sorry for being a closed minded individual. You are a much better person than I am. Sikhs, I’m sorry for insulting your culture and way of life. Balpreet’s faith in what she believes is astounding.

WOW, internet, I don’t even know you anymore! I never thought something would come out of the seeping necrotic abscess that is Reddit that would actually make my day better, but wow.

MY HEART GREW THREE SIZES THIS DAY. Balpreet you are in my list of HEROES