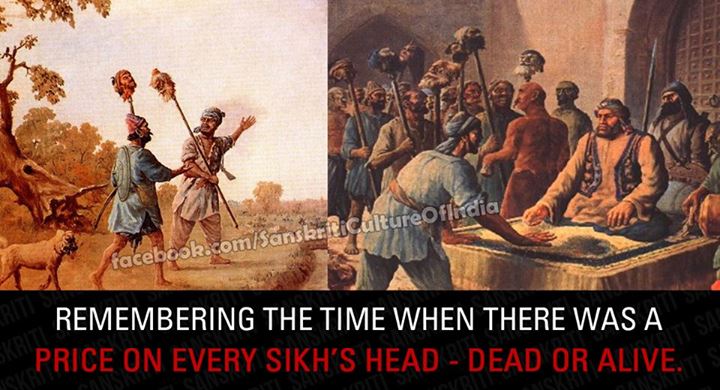 In 1738 Nadir Shah, the Persian ruler invaded India from Kabul, Afghanistan and went on a rampage to Delhi. He was returning to Persia in summer of 1739 while carrying a huge booty of looted wealth, Kohinoor diamond, women, artisans and slaves. To avoid the summer heat, the convoy would rest during the day and travel at night. At the peak of the day heat at 12 noon and at 12’O clock midnight, the Sikh guerillas started attacking his convoy right from Punjab up to the Indus. They freed many women, artisans, slaves and deprived him of large amount of wealth. The Sikhs started getting recognized as people who go mad at 12 o’ clock and therefore the 12 o’ clock jokes of nowadays originated which is equally outrageous and ridiculous!

ZAKARIYA KHAN (d. 1745), who replaced his father ‘Abd us-Samad Khan as governor of Lahore in 1726, had earlier acted as governor of Jammu (1713-20) and of Kashmir (1720-26). He later also took part in Lahore government’s operations against the Sikh leader Banda Singh Bahadur. After the capture of Banda Singh and his companions in December 1715 at Gurdas Nangal, he escorted the prisoners to Delhi, rounding up Sikhs he could find in villages along the route. As he reached the Mughal capital, the caravan comprised of seven hundred bullock carts full of severed heads and over seven hundred captives. After becoming the governor of the province in 1726, Zakariya Khan, shortened to Khanu by Sikhs, launched a still severer policy against the Sikhs and let loose terror upon them.

His moving military columns forced the Sikhs to seek shelter in remote hills and forests. Yet Sikh bands continued harassing the administration by attacking government caravans and treasuries. Such was the effect of their depredations that Zakariya Khan was obliged to make terms with them. In 1735 he ordered officials to capture Sikhs and hand them over for execution.

Plunder of Sikh homes was made lawful; giving shelter to Sikhs or withholding information about their movements was made a capital offence. Zakariya Khan’s police consisting of nearly 20,000 men especially recruited for this purpose, scoured the countryside and brought back hundreds of Sikhs in chains.

Prominent Sikhs including the revered Bhai Mani Singh and Bhai Taru Singh were, after the severest of torments, publicly beheaded at the Nakhas, the horse market of Lahore, later renamed by Sikhs as Shahidganj in honour of the martyrs.

Yet Zakariya Khan remained unsuccessful in his object of vanquishing the Sikhs. He died at Lahore on 1 July 1745 a dispirited man.