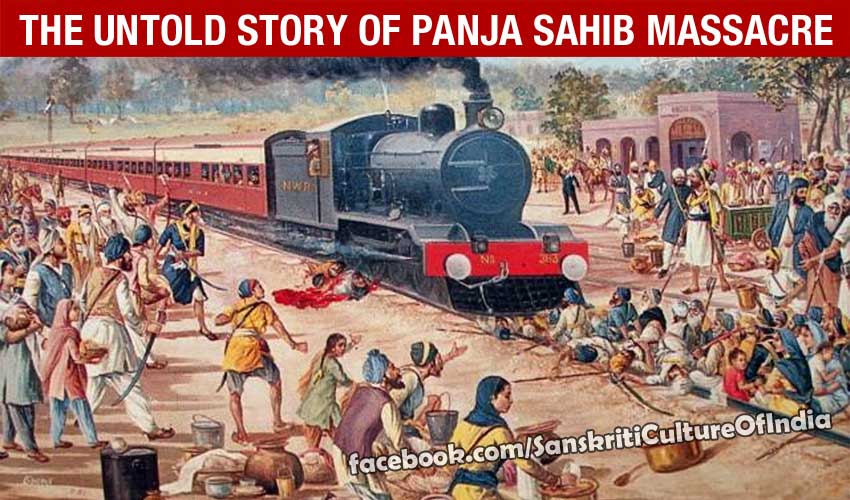 On the night of October 29, 1922 a special train left Amritsar, headed towards Peshawar. Among the passengers on board were a number of Sikh prisoners who were being shipped to Attock Fort to serve their prison sentence of two and half years each. These prisoners, and hundreds of others like them, were summarily tried and convicted by the British administration for participating in a non-violent agitation sparked by the Gurdawara Reform Movement at the time. The Reformists wanted to rid the gurdawaras and their shrines of the control of the hereditary “mahants” who had started misusing their positions for personal gains.

The British administration took the side of the wealthy mahants and would arrest and punish the protesting Sikhs, often beating them inhumanely, even for minor violations. This provoked more protests, and large-scale arrests and convictions followed.

Because of the clear injustice meted out to them, the prisoners aroused widespread sympathy among the Sikh community and became instant heroes. The train from Amritsar arrived at Rawalpindi on the morning of 30 October with the instructions that it was not to stop until it reached Attock. Hassan Abdal, the home of Punja Sahib, fell on the train route and ordinary trains routinely stopped here.

The word reached the Sikh community at Punja Sahib that the Sikh prisoners would be passing through Hassan Abdal on their way to Attock Fort. This caused a great deal of excitement in the community and they decided that the least they could do was to be present at the station and serve the prisoners a quick meal on the train. So, they had the food prepared and took it to the train station ahead of the expected arrival time of the train.

The stationmaster, when he saw all this excitement at his otherwise sleepy little station, informed the Sikhs that the train was not scheduled to stop and, therefore, there was no point of bringing food to the station. The Sikhs implored him to stop the train just long enough for them to serve food to the prisoners. But their entreaties failed. The train will not stop here, they were told bluntly. “All right then”, said a strapping young Karam Singh, barely 30, who was among the leaders of the crowd, “We will stop the train!” and added, “if Baba Nanak could stop that massive rock rolling down the hill with one hand, can’t we, so many, stop a train?” Another young man, twenty four year old Partap Singh, chimed in, “Yes, we can, and we will.”

At about ten o’clock, the Sikhs at the station noticed the train coming in, many of them, led by Karam Singh, jumped on to the tracks and squatted there cross-legged. Next to Karam Singh sat young Partap Singh followed by others – both men and women.

Approaching the station, the driver noticed from a distance people squatting on the tracks. He simply could not believe his eyes. He was under orders not to stop the train in any circumstances. He blew the whistle long and hard but to no effect. No one budged. He blew the whistle again, and again – and yet again. No one moved. The train continued hurtling towards the station. The horrified driver simply closed his eyes. The vacuum lever (controlling the braking system) dropped from his hands, the wheels screeched against the tracks sending out showers of sparks. There was a loud thud and the train came to a halt – but not before hitting the first man and pushing him into the others raising a mound of mangled bodies. The station was instantly engulfed in shrieks, groans and shouts mingled with the huffing and hissing of the angry steam engine, which, it seemed, was angry at his path being obstructed.

Everyone at the station rushed to help, but Karam Singh, who lay mangled and dying, stopped his rescuers by saying: “Serve the food to the hungry prisoners first and then help me”. It took one and a half hours before the tracks were cleared and the prisoners fed. And the train resumed its journey.

The driver of the train was an Araayeen Muslim from Gujrat city of Pakistan. The government had filed a case against him and he was investigated by a retired judge as to why he stopped the train despite orders not to do so. That driver gave a statement in front of that tribunal and this statement is of great historical significance. His statement was as follows:

“I had been given orders to not stop the train at any cost. As per the orders, I did not stop the train and it was moving at full speed. When the train hit shaheed Partaap Singh, I felt as if it had hit a huge mountain. I fell down and my hand got lifted from the speeder and the train stopped. After investigating the engine, it was found that the brake had not been applied. I felt that some unseen, hidden power stopped the train”.

This driver was subsequently fired from his position.

May we all learn and be inspired by the courage and dedication of the Sikhs of Panja Sahib.