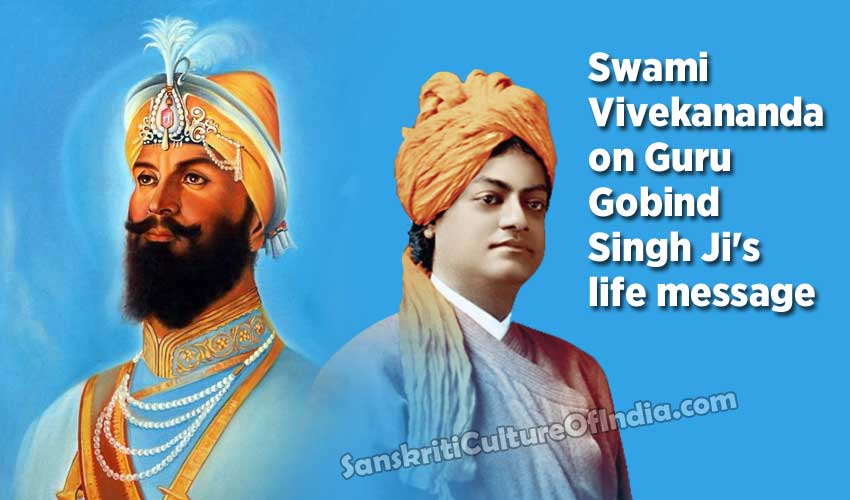 Swami Vivekananda, while strolling with some of his disciples on the roof of the late Balaram Basu’s house in Calcutta in 1882 recalled the life and message of Guru Gobind Singh ji.

He extolled the Tenth Guru and said:

“His self-sacrifice, austerity, self-discipline and his heroism resulted in the regeneration of the Sikhs as a nation.”*

He recited a passage which was current among the Sikhs: “Savaa lakh se ek ladda-on, tabh Gobind Singh naam kahaa-on!”

As he spoke about Guru Gobind Singh, Swami’s eyes flashed with a strange light, which fascinated his disciples, who gazed spellbound at his countenance and listened to him with rapt attention.

“Guru Gobind Singh gave them (the common people) that both the Hindus and Muslims of the time were living under the regime of intense oppression and injustice.

“Guru Gobind Singh not only created a common interest but also gave them the courage to realize it. So Hindus and Muslims alike followed him. He was a great devotee of God’s just power (sakti sadak). His type is rare in India’s history.”

“The great Guru after shedding his blood, and that of his dearest and nearest, for the cause of religion, for the sake of the down-trodden, the victimized, even when deserted by those for whom this blood was shed, retired into the South, without a word of complaint against his country or his men, without a single word of murmur.

“For India’s re-glorification, you must, each one of you, become Guru Gobind Singh – his true follower.”